We had one of our rare snowfalls in London overnight.  Cue traffic chaos, cries of “where’s the grit?” and a general lapse into childhood.  A good thing, the latter: see the smiles on the faces of people of all ages as they hurl snowballs at each other or construct elaborate snowmen.  Because it was the weekend, there was less of the moaning and more of the fun. And children cross their fingers and hope a fresh snowfall will give them a day off school. Unlikely.

I love the way our landscape transforms itself with a fall of snow.  It’s the snow on the branches of the trees, the way the white background accentuates the dark contours of everyday structures.  And of course there is the silence – the sound absorption of that white blanket.  All is calm, and bathed in that soothing grey-blue light.

In the afternoon I strolled down to the Grand Union Canal, to see how things looked in the snow and ice.  I left it a bit late and the thaw had begun, but that brought its own delights.  Here are some of the pictures I took.

On the way I went past the London Underground depot in between Northfields and Boston Manor.  It reminded me of the days when I used to read Thomas the Tank Engine to my son.  Oooh, a bit chilly today, Henry! 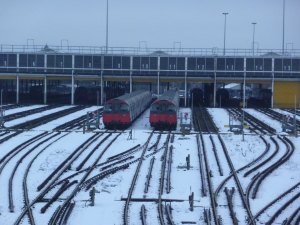 These next two shots are from when I arrived at the canal, from the grounds near Elthorne Park. 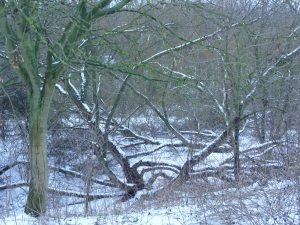 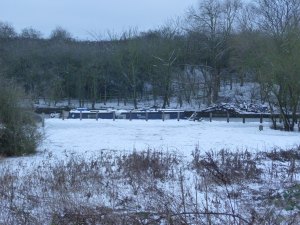 A couple more from the start of the walk. The canal’s surface was still frozen in places, but getting slushy on top. 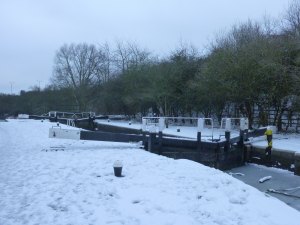 As the thaw took force, holes were opening up in the ice, with cracks extending from them.  They looked like giant spiders, or in one case, a rather magnificent set of antlers.

These disconnected branches repose on the ice. 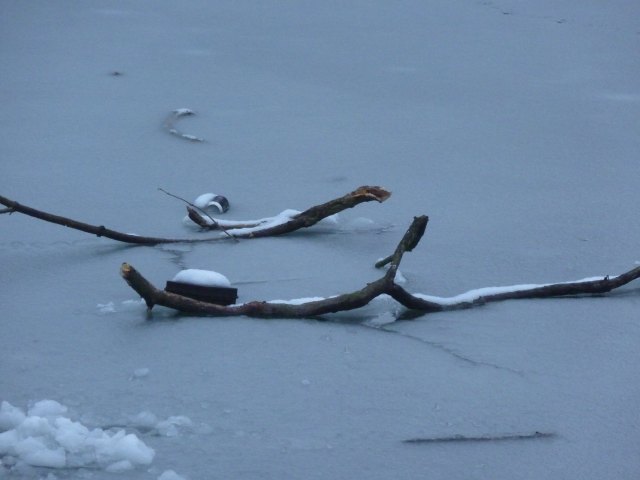 As the canal winds its way down to Brentford you can never escape the M4, London’s westward artery. Under the bridge, the grafitti has been scraped off (why?) , but it is making a comeback. 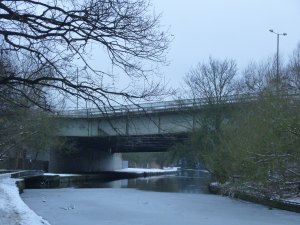 I like these shots of the reeds at the canal’s edge. 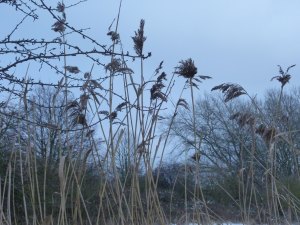 An old iron bridge carries the Piccadilly Line over the canal, ferrying the Heathrow passengers into London.

As the snow and ice thawed, water droplets plunged into the canal.

The ducks seemed happy with the situation.

A bend in the journey…

Footsteps and holes in the ice.

From various points on the walk you can see the wavy chimneys of what I think is a cement factory – or something similar. 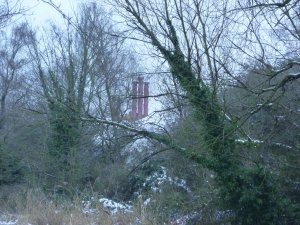 A guard of trees and some surviving snow.

The old iron footbridge over the canal – always a good one to get over on your bike, dropping down the gears – though not today.

Shots from the bridge – that M4 again!

And the other side. 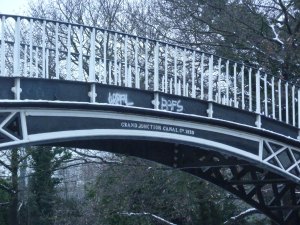 Glaxo Smith Kline’s HQ dominates the view around the point where the canal dips under the A4. I find it an endlessly fascinating building, with its points and curves and reflective cladding. In these first two shots it hides behind the trees lining the canal.

The last bridge across the canal before Brentford affords all sorts of views.

Here’s one of the bridge, curving over to Boston Manor Park.

No rest on this seat today.

And to finish, a couple more shots in Boston Manor Park. the snow and the shapes.

Nature, the weather, and the urban landscape in alliance.  Simple beauty in the everyday things all around us.

You can see a full set of the photos on Flickr.

I'm blogging about the things I love: music, sport, culture, London, with some photos to illustrate aspects of our wonderful city. I’ve written a novel called “The Decision”, a futuristic political thriller, and first of a trilogy. I’m also the author of a book on music since the 1970s called “ I Was There - A Musical Journey” and a volume of poetry about youth, “Growin’ Up - Snapshots/ Fragments”. All available on Amazon and Kindle.
View all posts by John S →
This entry was posted in London, Photos and tagged Grand Union Canal, local, London, Photography, photos, Snow, Trees. Bookmark the permalink.