To Padstow, Cornwall, to cook some seafood! 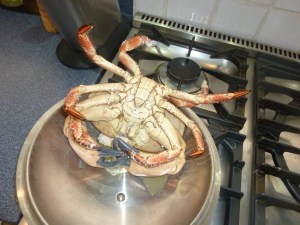 Last Christmas I got a great birthday present from my wife, Kath – a day’s fish and seafood cooking course at the Padstow seafood school. Yes, birthday – I was born on Christmas day. 1 in 365 of us has to be. At the same time my friend Jon had been bought the same by his wife Maggie for his birthday just before Christmas.  So, this weekend, the four of us – children suitably supervised back in London – took the train to the South West for the big cook-out. The wives were planning a leisurely day while the men sweltered in the kitchen.

We went down on the Friday.  The weather was beautiful. On the way down there is some lovely scenery, especially just the other side of Exeter, when the railway runs right next to the sea, with a stunningly red sandstone cliff on the other side.  This bit of the coast was still very misty around one o’clock, as we passed through, so the view was rather obscured, but it had a certain spooky atmosphere.

Padstow isn’t connected by rail so we had to get off at Bodmin Parkway and get a taxi.  “Parkway” means out of town when it comes to the railway. Middle of nowhere in this case, but very pretty.  The forest and Bodmin Moor. With a steam railway running alongside. And a nice little cafe doing bacon baps.

The taxi dropped me and Jon off at Wadebridge, five miles from Padstow, so we could cycle part of the Camel valley trail to Padstow. The Camel river is tidal at Wadebridge and the tide was out as we cycled by.  Here are a few photos of the ride.

I like the way there’s a crack , a canyon in the sand, as the water deserts the the land.

We moved a little closer to Padstow before I took this shot and Jon snapped me. 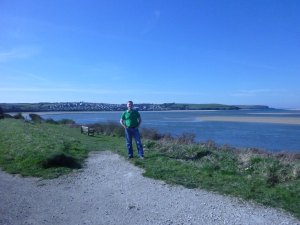 This next one is the the little harbour in Padstow.

And the the ferry between Padstow and Rock on the other side of the estuary. Miss this and you have a a long journey up, over and down the estuary.

A view from the coastal path, which we walked along in the afternoon.

A few close ups as we wound through the woods . 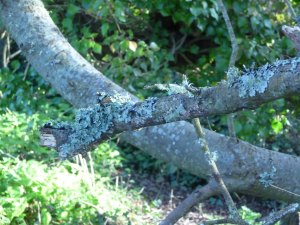 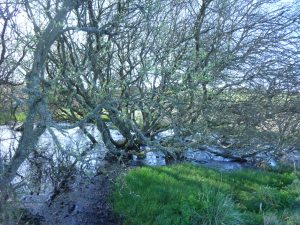 And into the open, looking across to where the lifeboat is situated.  I think the grey slate houses are where the lifeboatmen and their families used to live.  Not sure whether they do now.  But you can see it is/was in splendid isolation.

Walking along the beach I took a few detailed shots.

And then on to Day Two – The Course!

It was an early start: 8.45am arrival.  Jon and I ventured out from our cottage at 8.00 in the hope that we could find a cafe open and have a cup of tea and a bit of breakfast. We couldn’t find anything – Padstow’s cafes don’t seem to get going until 9.00 – and so we bought a loaf of bread and some butter at the Spar shop and went back to the cottage for some toast and tea.  Good job we didn’t have much of a breakfast because the day turned out to involve a lot of eating!

The seafood school is part of the Rick Stein empire. Rick, for any non-UK readers, is a chef who specialises in seafood and has made a great name for himself on TV.  He is from the Padstow area and now owns a number of restaurants in Padstow as well as a deli, a fish and chip shop, a gift shop, a bakery, a hotel and no doubt much more.  He has become synonymous with the town.

The school looks quite ordinary from the outside (see next photo), but inside it is a superb space.  It was a cooking paradise, such were the facilities, the ventilation (no sweltering), the utensils and the lovely view onto the estuary beach (OK, my shot through the window here isn’t the greatest, but you can imagine how nice it is to have a view like that). 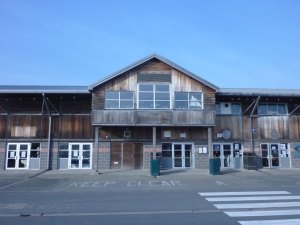 Our master of ceremonies and master chef for the day was Keith, a Yorkshireman with the gift of the gab and an amazing talent for cooking.  He was incredibly knowledgeable about all aspects of the fish and shellfish we were preparing. The day was a real education.

After coffees the day started with a bang, with instructions on how to kill a crab. This was necessary for the preparation for one of the courses, a crab bisque.  To ensure that the crabs are fresh, they are bought live. They are killed with a couple of strategic thrusts with a skewer.  You wince a bit watching it, and then doing it.  But it’s the reality.  If you want to eat an animal, it has to be killed.

This is the said crab, post execution. The weapon is next to the board.

Over the day, we cooked four courses, having had a demonstration on each first. We worked in pairs, so naturally, Jon and I teamed up. At each stage we ate the fruits of our labour.  This is why we became glad we hadn’t found a cafe open at eight o’clock.  At about eleven we were eating the first we’d made: deep fried lemon sole with a spicy Malaysian coating, with a sambal side dish and a rocket salad. This was probably the most complex dish to make.  We learnt how to fillet and skin the sole. A very sharp and very bendy knife is essential.  But it worked. The sambal was a mixture of torpedo-shaped onions, long red chillies (with the seeds scooped out) and tomatoes grilled until they were black.  There was a black chilli pepper too, which had a kind of liquorice flavour. It was all chopped up, and then we added lime juice and Thai fish sauce.

This is how it ended up looking on the plate, but I can tell you, those pieces of sole were so succulent, while the batter and the sambal had some seriously spicy oomph. Eleven o’clock, and we wanna rock!

Keith was funny about his rocket. It had to be turned the right side up. No grabbing a big lump and just shoving on the plate. Perfectionism!

The crab, once killed, was plunged in salty water and cooked for eight minutes. Meanwhile we got on with preparing the next dish, which was a delicious concoction of clams and lardons with a tomato and red wine sauce and parsley. It ended up like this.

We moved on to the crab bisque.  An amazing number of ingredients went into this. Carrots, celery, onions, garlic, parts of the crab, prawns, brandy, dry vermouth, tomato puree, fish stock. Boiled, simmered, liquidised, strained through a pointy colander and then finished off with butter, Cornish double cream and a bit of paprika. Yowsa!

The taste was exquisite.  It was so rich that you wouldn’t want a massive dishful, but as a starter it was unbeatable.  Jon and I congratulated ourselves for getting our soup’s texture exactly the same as Keith’s. It was the moment of the course – how can food taste this good?

So here is the concoction before it got mashed by the liquidiser.

And here is the final product, with a little bit of the crab meat preserved from the monster.  Jon and I misheard the instructions so ate most of ours while we were cooking.  Good ol’ Keith let us have a bit from the demonstration to garnish our perfect soup.

The last thing we cooked was Ling (a cross between a cod and a large  eel) with spring onions, gem lettuce hearts and peas.  All braised in butter and chicken stock and topped off with some crispy pancetta. Oh wow, I’m practically crying with delight as I describe it! It was so nice.  And so simple to make, once, Andy, another of the chefs, had done the hard work filleting the massive ling.

So here it is in the pot and then on the plate.

The braised lettuce was quite delicious. Beats the salad version any day!

And while we were making this meal (and beforehand), Keith and Andy were making the mother of all seafood paellas, with intimate details of the average squid’s sex life described en passant. Lobster, squid, monkfish, mussels, sea bream. Spanish rice, saffron, which cost a huge amount – if I’d sneezed while smelling the bowl of the stuff that was passed round, £130 would have been on the floor!

And, well, I doubt I have to tell you how good it tasted.

So, after each dish we ate our produce, and from the clams onwards we were were washing it down with some very nice white wines too. Nothing too excessive, but a lovely complement. By the time the course ended – about 4.30 – we were most definitely, replete.

So what can I say? If you fancy doing something a bit different, or giving a close friend, or your partner, something interesting for a present, then a trip to the Padstow Seafood School, comes highly recommended.  Costs £195, but dare I say… it is worth every penny!

We still had the Saturday evening before us, of course, after this culinary adventure and five course feast. After meeting up with Kath and Maggie in a cafe, Jon and I retired to a pub to watch Stoke vs Man City play out a grim 1-1 draw, leavened only by a quite magnificent volleyed goal by Peter Crouch. And then, after a brief rest at the cottage,  the four of us went to one of Rick Stein’s restaurants, the St Petroc. Being all fished out, I had a steak, with scallops to start (on the basis that we hadn’t cooked any of those on the course). More wonderful food – not exactly necessary, but it had to be done.

And all the while, the weather was beautiful.  The perfect weekend.

There’s a larger set of photos on Flickr – see the link under the Blogroll on the right of this piece.

I'm blogging about the things I love: music, sport, culture, London, with some photos to illustrate aspects of our wonderful city. I’ve written a novel called “The Decision”, a futuristic political thriller, and first of a trilogy. I’m also the author of a book on music since the 1970s called “ I Was There - A Musical Journey” and a volume of poetry about youth, “Growin’ Up - Snapshots/ Fragments”. All available on Amazon and Kindle.
View all posts by John S →
This entry was posted in Photos, Random stuff and tagged Cookery, Cornwall, Crab, crab bisque, Fish, lemon sole, Ling, Padstow, Padstow Seafood School, Paella, Photography, photos, Rick Stein, River Camel, seafood. Bookmark the permalink.

4 Responses to To Padstow, Cornwall, to cook some seafood!