On Saturday I got on my bike and cycled out to Dollis Hill in North West London.  Why oh why? Well, Albertina, who blogs as Greenford 365 on WordPress had posted a picture of a really interesting, almost Art Deco building on Twitter, and I thought it would make a change from going along the Thames,  to venture into the suburban recesses of North West London to see it for myself. I took the opportunity to ride along the Paddington branch of the Grand Union Canal for a bit, from Perivale to Acton Lane in Harlesden. I then threaded my way up to Gladstone Park in Dollis Hill. And let me tell you, there were some big hills.  This was quite a tough bike ride, by London standards. Having got to the top of the hill, bordering the park, I slid down to the Dollis Hill Synagogue of old, now a primary school, the subject of my journey. The building is protected by a fence and some trees – good for the privacy of the pupils, not so good for enjoying the architecture. But here are a few shots. 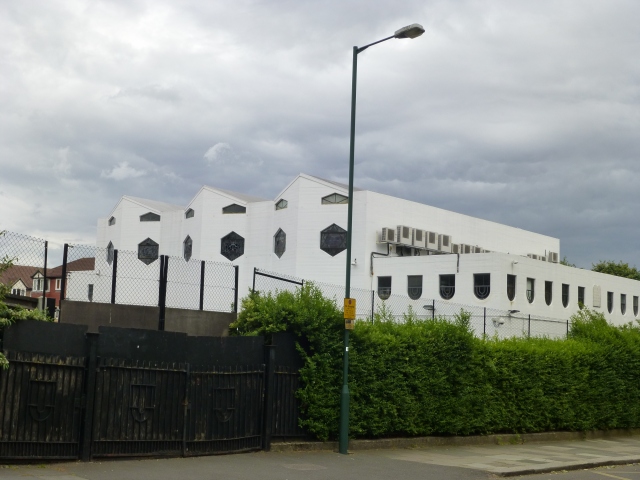 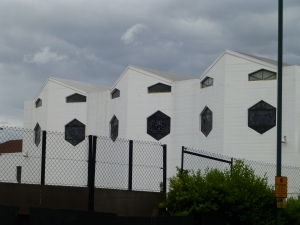 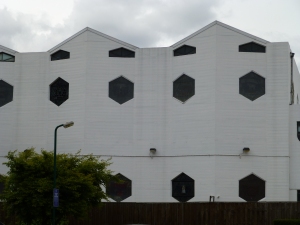 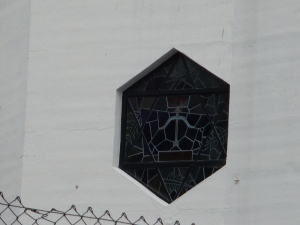 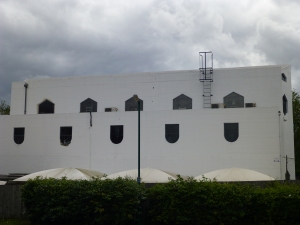 What I love about this building is its detail and daring.  Standing out amid suburbia. The stained glass windows.  The unusual shapes.  The whiteness.  The spirit of Art Deco if not the classic lines. The building was designed by Sir Owen Williams and opened in 1938. The Jewish congregation weren’t too keen on it and he returned part of his fee. It remained a synagogue until 1993, when it was closed for financial reasons. It was sold to the Torah Temimah Primary School in 1995. I think it’s a splendid piece of architecture, which was well worth the cycle!

Next, I thought I’d head to the Neasden Hindu Temple. But first I had to see a street I’d spotted on the London A-Z. Dog Lane! Great name. But who would want to live there? 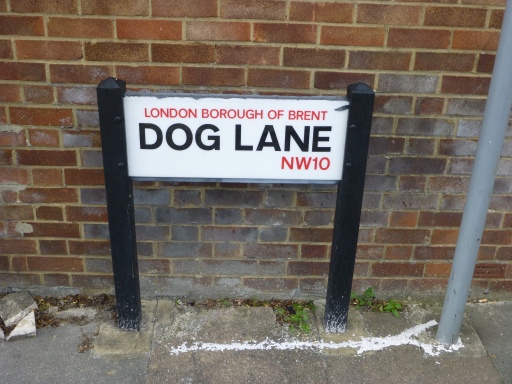 It’s a small street, connecting Neasden Lane with the North Circular, London’s inner orbital route (the M25 being the outer). At one end is quite a nice building. Perspective slightly wonky as I was leaning on my bike.  At the other end a car you don’t argue with! 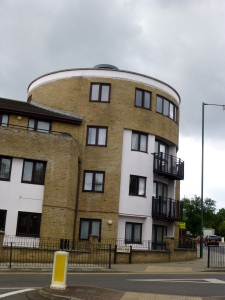 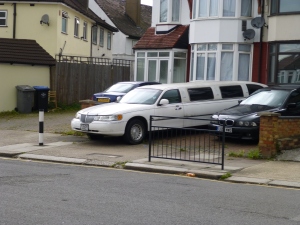 On a short cycle along the North Circular, I passed another temple, the temple of Domestic  Furnishings… 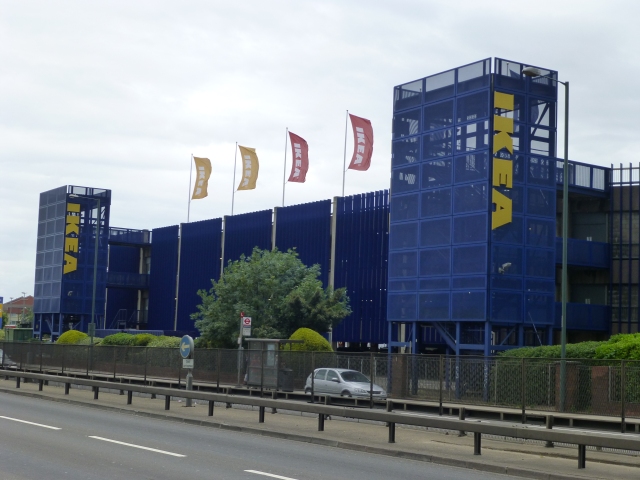 And then I cycled down Brentfield Road to the BAPS Shri Swaminarayan Mandir. Neasden Temple. Opened in 1995. In Neasden! Home of Private Eye’s legendary football manager Ron Knee.  The temple rises above all of that. It is magnificent.  My pictures, in the gloomy June weather, just hint at that. 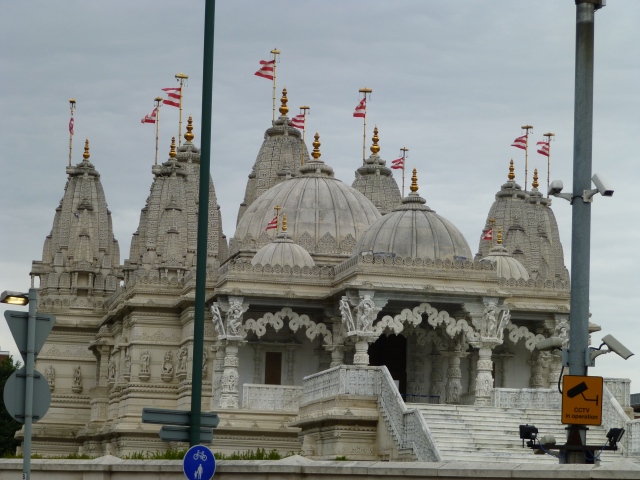 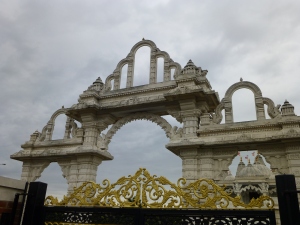 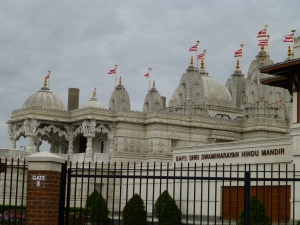 After the Neasden Temple, it was off to the Temple Of Football, Wembley Stadium, just the other side of the North Circular. Just a few shots here, as I intend to do another, more detailed blog on the stadium, with its amazing arch. I took photos galore. It invites you to do so. 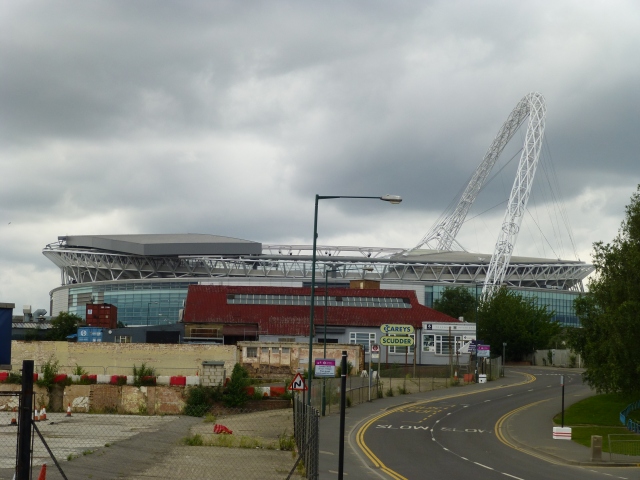 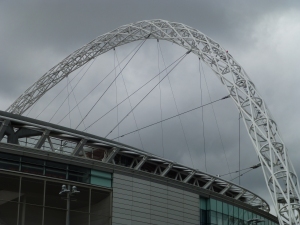 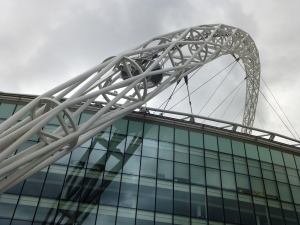 On my way back home from from Wembley, I cycled down the Ealing Road until it connected with the Grand Union Canal. Ealing Road stretches from Wembley to Alperton. People think of Southall as the ultimate Indian community, but Ealing Road must rival it. The jewellery shops, the amazing fruit and veg wholesalers, the restaurants and fashion shops. And now, another temple, opened in 2010, the Shree Sanatan Hindu Mandir, which means, roughly, the all-inclusive temple. The intention seems to be to build bridges with other religions.  A truly laudable intent.

The temple cost £16m to construct and is built in an old fashioned way.  No metal core, apparently. Similar structure to Angkor Wat, in Cambodia. The limestone imported from Gujarat in India. 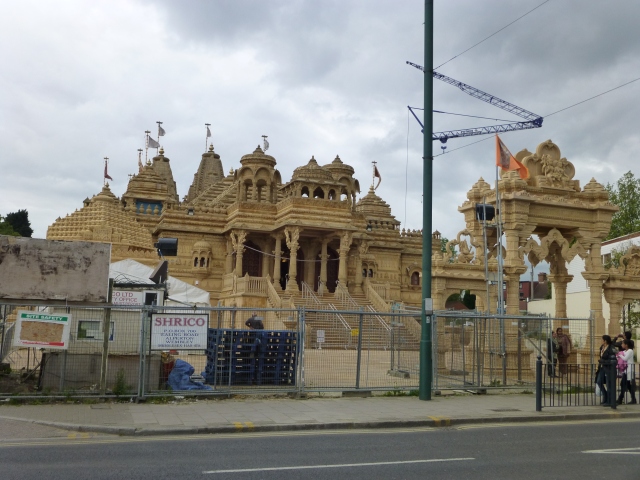 It’s a kind of scruffy frontage, but closer up, the magnificence is clear, 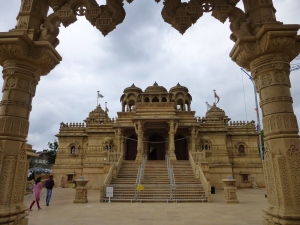 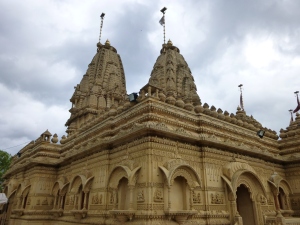 So, North West London, nondescript as it mostly is, has these four treasures (not including Dog Lane and IKEA!). And no doubt more.  The message: anywhere you look, you’ll find fascination. The wonders of the big city.

Or maybe just the wonders of any human gathering.

I'm blogging about the things I love: music, sport, culture, London, with some photos to illustrate aspects of our wonderful city. I’ve written a novel called “The Decision”, a futuristic political thriller, and first of a trilogy. I’m also the author of a book on music since the 1970s called “ I Was There - A Musical Journey” and a volume of poetry about youth, “Growin’ Up - Snapshots/ Fragments”. All available on Amazon and Kindle.
View all posts by John S →
This entry was posted in London, Photos and tagged Dollis Hill Synagogue, Ealing Road temple, London, Neasden Temple, Photography, photos, Wembley Stadium. Bookmark the permalink.