Writing this, Sunday night/Monday morning after a day with family and friends at a rainy/sunny barbecue and then watching the showpiece race, the 100m, with Usain Bolt reasserting his supremacy.  Awesome stuff, another notch of brilliance in this fantastic Olympics.

But Saturday was something else…

It started with a visit to the Olympic Park for me, Kieran and brother-in-law John. We had tickets for basketball and women’s hockey, with an early start: the first basket ball game started at 9am.  After the beach volleyball the night before and the need to blog so it wasn’t forgotten, I didn’t get to bed until after 2am. Ugh!

Having been to the Park during London Prepares, it was great to see it full and absolutely raring to go… 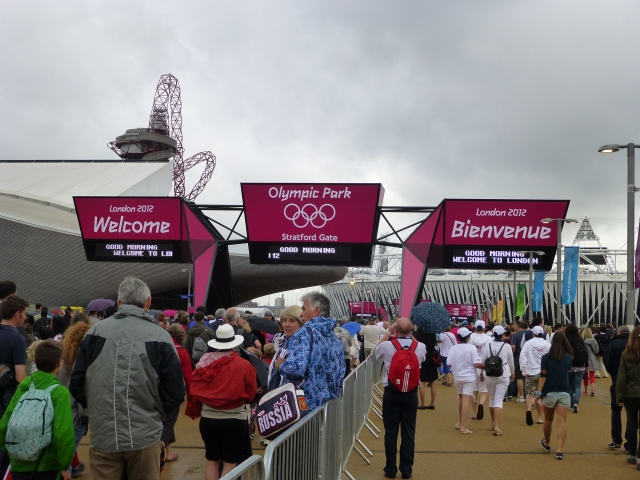 At the basketball, we had excellent seats, very near the front.  You could hear the boots squeaking as the players twisted and turned. First up was France v Tunisia. 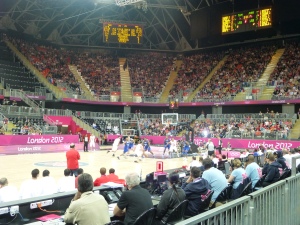 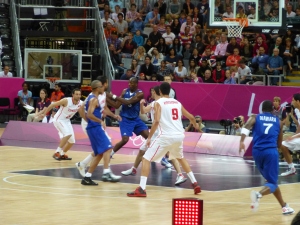 I’m no expert on basketball, but this looked like a fairly routine victory for France, 73-69. Probably could have stepped up a gear. They had a big bruiser, Diawa, who didn’t seem to do much, but held it all together, and a nippy and relatively short guy, Parker, who ran the show and scored a lot of points.

Spain v Russia, the second match, was on a different level. Spain were silver medallists in 2008. Amongst others they have the giant Gasol brothers, who both play in the USA, at the highest level.  They skulked around with their beards and huge yellow boots.  I got the impression that they expected to win quite easily, and the game started that way.  Spain were winning 16-2 at one point, early on. But Russia clawed their way back mid-way through, then fell behind again, but surged at the end and snatched the game, 77-74.  They were good and really impassioned, but I think the Spanish were a bit complacent, and should really have won.

What a good game though. Seeing the skill, the physicality, so close up, was quite something.  Something to look out for in the future. 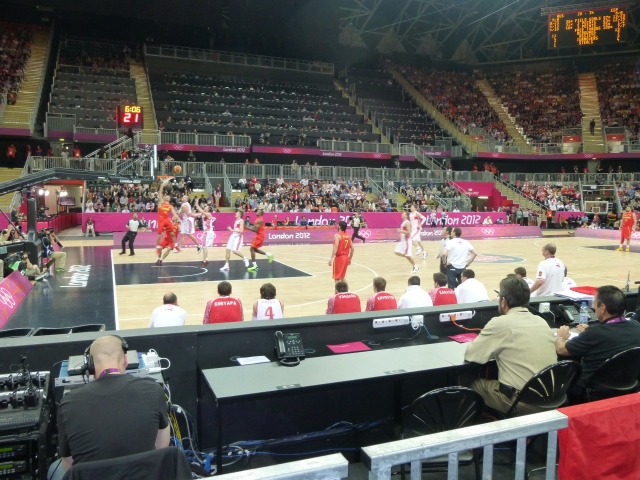 Like the beach volleyball, there was loads of music, exhortation to clap, sing, dance, etc.  Didn’t feel quite the same in the morning, compared to Friday evening, but the MC certainly gave it some. And there was some lively mid-game entertainment. A troop of men bouncing off trampolines and scoring improbable baskets, and the inevitable dancing girls, showing some impressive gymnastic skills.

After lunch we headed over to the hockey arena.  Caught some good views on the way.

The hockey arena is pretty impressive too. Shame it’s one of those (I think) that gets taken down afterwards. 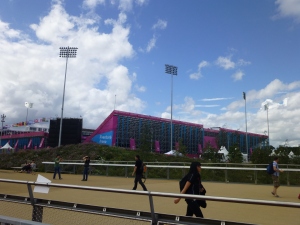 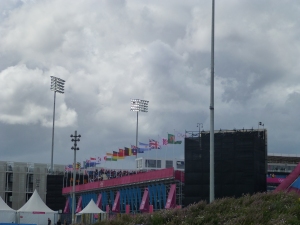 The atmosphere at the hockey was pleasant. Family-style. Not raucous, and to be honest, a little subdued. That was a due to a combination of the weather- we were assaulted by squally showers every now and then – and some pretty average, unadventurous play.

First we had Belgium v Japan. 1-1. Yeah, well… Then we had GB against China, battling for second place in their pool, behind the mighty Netherlands. A draw favoured GB, and they played like it.  Unfortunately, when they got a succession of penalty corners in the first half, they couldn’t score.  The Chinese got a couple in the second half and scored from both both.  GB roused themselves and scored a late goal, again from a penalty corner. It was the one moment the crowd really got going. But that was it, too late, 2-1 to China.

I enjoyed it though.  Here are a few photos from inside the ground.

As we headed back after the game, I was struck by the sheer volume of people in the park.  It is a massive place – takes half an hour to walk from one end to the other – and needs to be at peak times to avoid a complete scrum.  Overall it is OK. Queues are long for food and drink when everyone pours out of a venue, but otherwise you can get refreshments quite quickly, including free water. (Yes, something is free!) In fact, the whole thing is really well constructed and planned. This is a massive success for all involved, and something for us British to be really proud of.  I am proud, no doubt at all.

We left the Park around 6pm and caught the Javelin overground train – very plush and quick – to Kings Cross/St Pancras. Then homeward on the good ol’ Piccadilly.  We were back home for the greatest night of British athletics ever!

There were a couple of rowing golds earlier in the day for GB and a gold in the cycling in  the women’s team pursuit, where the British girls absolutely trashed the Americans.  Quite extraordinary. Caught that on the BBC’s brilliant on-line catch-up service.

And then the amazing night for British athletics.  First Jessica Ennis finished off her triumphant heptathlon by winning the 800m. Then Greg Rutherford won the men’s long jump – not one that had been expected. And then Mo Farah trumped the Kenyans and Ethiopians and cruised to victory in the 10,000m. By now the stadium was in a raucous ecstasy, and at home we felt a delighted disbelief. Best of all was Jess. She missed Beijing 2008 because of injury. So this one meant all the more.  Interviewed afterwards, she broke down in tears – happy tears – half way through.   Blimey, I was choking up, myself! Later there was the medal ceremony. Jess’s eyes filled with tears as the crowd belted out “God Save The Queen”. Oh, wow, so did mine!

I know it’s only sport, but it brings out the love. It’s been building all week.  Bradley, Lizzie, all the other winners and heroic losers, and then Jessica, Greg, Mo…  Britain – yes, Britain, not just England, or London, but all of you – I love you!

I'm blogging about the things I love: music, sport, culture, London, with some photos to illustrate aspects of our wonderful city. I’ve written a novel called “The Decision”, a futuristic political thriller, and first of a trilogy. I’m also the author of a book on music since the 1970s called “ I Was There - A Musical Journey” and a volume of poetry about youth, “Growin’ Up - Snapshots/ Fragments”. All available on Amazon and Kindle.
View all posts by John S →
This entry was posted in London, Photos, Sportsthoughts and tagged Jessica Ennis, London, London Olympics, Olympic Park, Olympics 2012, Olympics basketball, sports. Bookmark the permalink.