It was a lovely, but cold, day in London today. The sun was shining and there was very little wind.  Perfect for a good long cycle. I started with an old favourite, the Thames towpath down to Hammersmith Bridge. Then, radically, rather than just heading back on the other side of the river, I cycled up to Kensington past Holland Park. There’s a cycle lane called Holland Walk (strangely enough). It was hillier than I’d expected – up and down. I then went over to Ladbroke Grove and took the journey up to the Paddington branch of the Grand Union Canal. Ladbroke Grove is at the heart of Notting Hill. It is simultaneously one of the wealthiest areas of London and one of the most ethnically diverse. It is the home of the Notting Hill Carnival at the end of August every year, which celebrates the culture, and especially the music, of the West Indian community in London.  I haven’t been so much recently, but I remember many a good moment absorbing the sounds of reggae, soca and other dance music, with the enormous bass speakers pounding the sounds through your chest.

As you turn into Ladbroke Grove, you are immediately delivered into some of the grandest architecture in London.  The homes of the rich – the bankers, the oligarchs, the artists, the odd politician, the just-got-luckies. All that white and cream stucco, the columns, the high fences. Keeping out the riff raff.

As you ascend, the architecture slowly changes.  The houses become smaller, more terraced and eventually rather run down. You then get into the shops and restaurants, ethnically diverse, vibrant. This is the heart of the Notting Hill Carnival. The Westway – the A40, one of the major routes out west – crosses over. It’s one of the iconic places in punk culture, eulogised by the Clash, amongst others.

And then, heading further north, you move into a bit of a no-man’s land. Semi industrial, semi residential. North Kensington. Hmm, not quite the same as central Kensington, or South Kensington, or even West Kensington.  Pockets of trendiness, no doubt, taking advantage of cheaper property prices. But otherwise, this is not really Kensington even if it says it is.

And this is where I got off the road (hooray!) and back onto the water’s edge. This time the Grand Union Canal, Paddington branch. This branch of the canal starts in Southall, West London and travels all the way to Regents Park, in central London, home of London Zoo. I sometimes join it in Perivale, in the North of Ealing and head east for a bit. It really is one of those bits of hidden London. Hardly anyone knows about it.  You go by places like Alperton, Old Oak Lane, the back of Wormwood Scrubs (home of the famous prison as well as lots of football fields). There’s a big Indian food factory, whose curried odours permeate the atmosphere. And there’s a bridge where, bizarrely, the canal flows over rather than under the North Circular, London’s main peripheral road before the M25 was built. This must have been a tremendous feat of engineering.  Every time I cycle over the bridge, I think, what did they do with the water while they were building the bridge? There’s probably a simple answer, but I’m a writer, not an engineer, so it’s not remotely obvious to me.

But anyway, as I went on to the canal, I was immediately struck by the serenity and otherness of the place. Such a contrast to its surroundings. I took a few shots with my iPhone, mainly into the sun, which was already thinking of setting in the west. So the best ones are the silhouettes and the distortions courtesy of the zoom. At least I think so!

Some views from near the bridge: 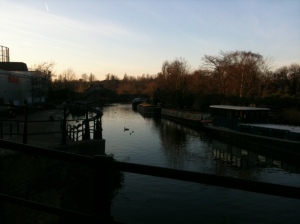 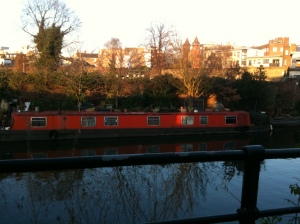 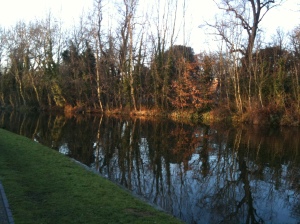 Some of those distortions: 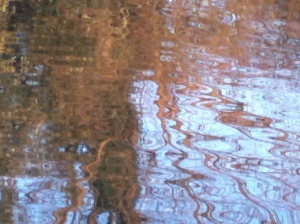 These gasworks offer some fascinating shapes and structures. 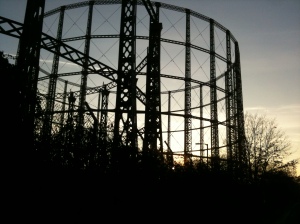 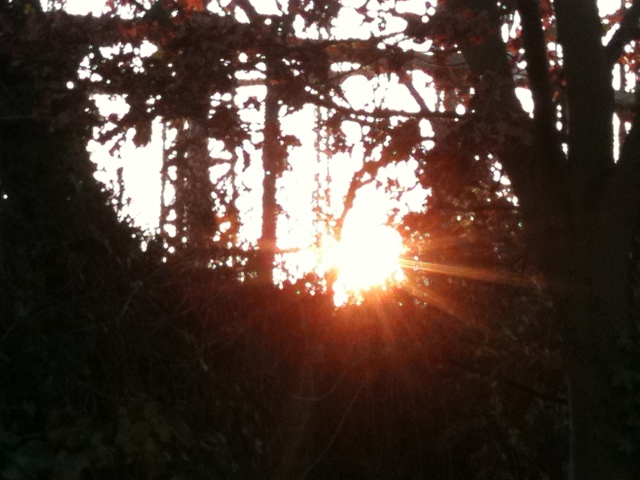 With the sun behind. 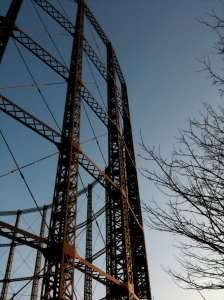 And a bit further along the canal, Wembley Stadium rose from behind the rubbish dump. This is what you get on canals! Zoom effect. 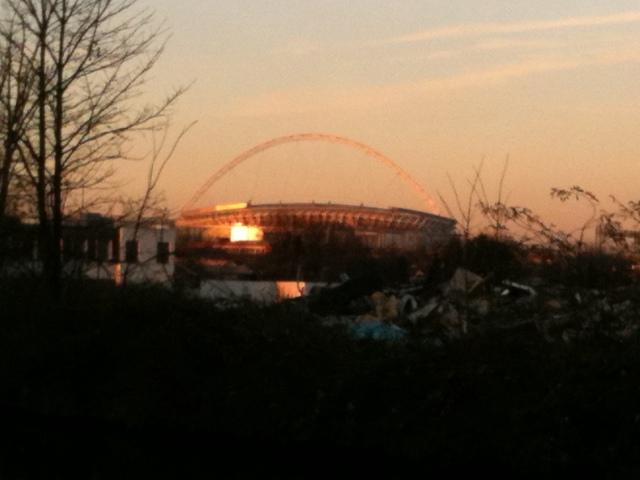 I'm blogging about the things I love: music, sport, culture, London, with some photos to illustrate aspects of our wonderful city. I’ve written a novel called “The Decision”, a futuristic political thriller, and first of a trilogy. I’m also the author of a book on music since the 1970s called “ I Was There - A Musical Journey” and a volume of poetry about youth, “Growin’ Up - Snapshots/ Fragments”. All available on Amazon and Kindle.
View all posts by John S →
This entry was posted in London, Photos and tagged Grand Union Canal, Ladbroke Grove, local, London, Photography, photos, West London. Bookmark the permalink.