The FA Cup. Not what it used to be – time was when it felt as important as the League and the winners played in their own competition in Europe – but still capable of firing the imagination. Eventually it is usually won by one of the big sides, and in recent years there haven’t been too many upsets. But this season something seems to have happened. The minnows have bitten back.

The League Cup – currently labouring under the title of the Capital One Cup – set the tone, with Bradford, from League Two (ie, the fourth division) reaching the final, beating Wigan, Arsenal and Aston Villa (over two legs) on the way.

And this weekend there has been a whole load of “giant killing” acts. Millwall beat Aston Villa on Friday (not very giant killing given Villa’s previous flop). On Waturday, non-league Luton toppled Norwich and League One Milton Keynes Dons stuffed QPR. Today League One Oldham beat Liverpool 3-2 and Championship Leeds (once mighty Leeds but no longer) ambushed Spurs 2-1. And none of them looked like flukes. The top teams get complacent, put out semi-reserve teams, and the lower league teams may be beginning to get better, as training and technique improves at all levels.

Which brings us on to the West London derby that hadn’t happened since 1950, Brentford v Chelsea. League One promotion hopefuls against the Premier League arrogant aristocrats.

Brentford are my local team, 20 minutes walk down the Windmill Road. Just over the A4. Over the years I followed them a bit, but despaired at the awful football they played. They had a really good spell seven years ago, when they were poised for promotion and beat Premier League Sunderland in the FA Cup in January 2006. Things were looking good, but the management immediately sold their best striker, DJ Campbell, for a paltry half million to Birmingham. The goals dried up, promotion was missed and they slid back into obscurity. I stopped going a lot, as I got into the Quins rugby as a season ticket holder four or five years ago. The Bees stopped buzzing for me.

So I felt like a bit of an interloper when my friend Smithy offered me a ticket to today’s game. The big one. But I couldn’t resist the chance to see the Bees pit their wits against the Chelski.

The game was on at the absurdly early time of 12 noon. On a Sunday! A tweet from the Pope (yes I follow him  – or his press office) reminded me it was a time for the family and for worship. Er well, Smithy and I met for a fry up at Cafe Nell on Northfields Avenue at 10 am and then walked down to the Lord Nelson pub near the A4 for a couple of pints of London Pride before the game. Before 11.30! The things you do for football…

There was a cracking atmosphere inside the ground. A tremendous sense of anticipation. The Chelsea fans cuttingly sang “You’re only here for the Chelsea” (which was kind of true in my case) but the Brentford boys riposted with “Champions of Europe, you’re having a laugh”. Which, as the first half progressed, was very telling. And they had great fun booing the pantomime villains, John Terry and Ashley Cole.

Brentford started tentatively, but as they began to realise that some of the Chelsea players weren’t really up for it – step forward Marko Marin and Oscar – they grew in confidence, dominated midfield and deservedly took the lead, through Marcello Trotta. The fans went crazy. 1-0 to the Super Bees! 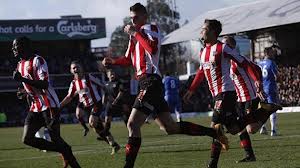 Chelsea came out in the second half with a bit more purpose, helped by the fact that Juan Mata was on. He became the fulcrum of the team, gave it shape and confidence. It was no surprise when Chelsea equalised. Oscar, liberated by Mata’s arrival, with a classy outside of the boot finish. 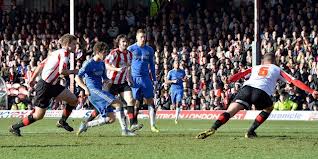 It didn’t look too good for the Bees, but they regrouped and pressed forward. A lovely pass by striker Clayton Donaldson put subsitute Tom Adeyimi through and he was brought down in the penalty area. Young midfielder Harry Forrester put the penalty away. 2-1! 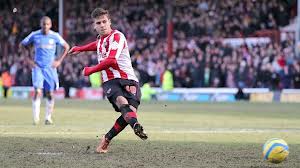 Inevitably Brentford sat a bit too deep after that and Chelsea dominated. In the end they got a deserved equaliser, a lovely curled shot from Fernando Torres, who’d had a frustrating game. 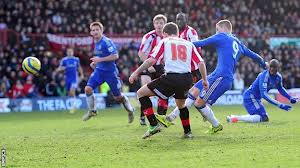 With a few minutes to go you feared the worst, but Brentford closed the game out for a replay at Stamford Bridge.

That will be great for Brentford financially, and I hope I’ll be able to go to the replay. I was impressed by some of their play today – more sophisticated than what I witnessed when I used to go to see them regularly. There were some promising players in the team. Harry Forrester and captain Jonathan Douglas were impressive in midfield. The young left back, Shaleum Logan, showed good skills and the sign of class – time on the ball. And I like the the way Clayton Donaldson put himself about, especially when he went to sole striker in a 4-5-1 in the last twenty minutes.

Chances are that Chelsea will polish off the tie fairly easily in the replay. But you never know. Wouldn’t it be great if the Bees humiliated John Terry and his complacent gang?  Not that they’d care all that much, as they have bigger fish to fry in the Premier League. But manager, Rafa Benitez might, as the hard core fans are still against him. Contrast with the Bees manager, the German Uwe Rossler. Top player in his time and looking pretty slick as a manager too.

I don’t really go for the “magic of the Cup” cliche that all the commentators trot out. But it is a time for fans of the smaller clubs to dream, and Brentford’s performance today showed that those dreams can have meaning.

Come on you Super Bees!

(Photos courtesy of Google Images. Took a few shots on my iPhone, but managed to delete them updating my iPhone software tonight. Grrr….)

I'm blogging about the things I love: music, sport, culture, London, with some photos to illustrate aspects of our wonderful city. I’ve written a novel called “The Decision”, a futuristic political thriller, and first of a trilogy. I’m also the author of a book on music since the 1970s called “ I Was There - A Musical Journey” and a volume of poetry about youth, “Growin’ Up - Snapshots/ Fragments”. All available on Amazon and Kindle.
View all posts by John S →
This entry was posted in Sportsthoughts and tagged Brentford, Brentford 2 Chelsea 2, Chelsea, FA Cup, football, Soccer, sports. Bookmark the permalink.