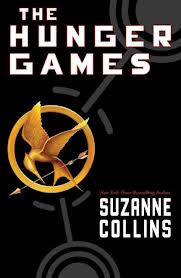 I’ve just finished reading ‘The Hunger Games” trilogy. The books have been absolutely brilliant. Utterly gripping. The number of times I almost missed Victoria station, where I get off the Tube for work, because I was so engrossed in the books, I couldn’t tell you.

So, a brief synopsis of “The Hunger Games”. First book only, which has also been made into a brilliant film, starring Jennifer Lawrence. Because the others are also going to be films and I don’t want to spoil the fun. Next film is out this November, I believe.

A post-war USA in which a dominant power – the Capitol – has subjugated 12 “districts”. The price the districts pay is that each year two of their children – one boy, one girl – are selected by lottery to participate in the Hunger Games, in which the 24 “tributes” fight to the death, until there is one survivor. The Capitol provides an arena, a televised build up and all sorts of hideous tricks once the Games begin. It’s essentially a parody of the game and reality shows that pervade television today. Humiliation in our TV today becomes death in “The Hunger Games”.

A girl from District 12 – Katniss Everdeen – volunteers for the Games when her sister Prim is drawn out of the hat. This is allowed. The boy selected is Peeta Mellark, a baker’s son, who, it transpires, has always had a crush on Katniss.

Katniss has a history of hunting for game in the grounds outside District 12, with another boy called Gale. It’s illegal but they are able to trade their products for other food in the black market. This way their families, devastated by the deaths of both fathers in mining accidents, can survive.

Thus are the three key characters – Katniss, Peeta and Gale – established. Two in the Games, the other one there, always in Katniss’s mind. And a major player as the story progresses.

So, when I’ve said how much I’ve enjoyed the books to friends, colleagues at work, some say, “Aren’t they teenagers’ books?” With a subtext, “why are you reading them?”

The answer is that the books are brilliant stories. Age doesn’t matter. What makes something a book for teenagers? Is it concision? Vivid prose? Great action? Characters they can relate to? Er, yes, I think we can all sign up to that. Maybe teenagers demand it. Maybe authors and publishers know they have to get it absolutely right for the teenage market.

Some of the best fiction I have read in recent times has been ostensibly for young people. Philip Pullman’s “His Dark Materials” trilogy was quite extraordinary. And then there is Harry Potter.  I read all seven books with my son Kieran. We loved them. The books and the films.  Completely captivating, iconic.  Tell me what is better.

And so in “The Hunger Games”, Katniss and Peeta become the stars of the pre-games show. Katniss becomes the icon, the girl on fire. And then the Games begin. The author, Suzanne Collins, takes us through them superbly. The tension is unbearable at times. I read the books mostly on the Tube to and from work. I’m sitting or standing there – on the Piccadilly Line – sometimes having to put the book down, to absorb the moment, the fear. It’s almost too much. And sometimes I’m having to pause because I just feel the emotion between Katniss and Peeta. There are moments when I am trying to hold back the tears.

So what I’m saying is that Suzanne Collins has succeeded on all levels. The plot is engrossing. The progress of the Games is agonising, the tension almost unbearable. The characters have depth and are truly sympathetic. When Katniss hurts, you hurt.

Katniss and Peeta survive the Games. Their pact outwits the intentions of the Capitol, in particular the evil President Snow. But he is ready to strike back in Book Two… and Three. But it isn’t just him.

And at the end of the first book, Katniss and Peeta’s relationship is unresolved.  It remains that way for much of the story over the next two books. Gale features heavily too.

The next two books take us on an incredible trip. I will not describe the story right now. You must read the books if you want to know. There is no way you will be able to predict the denouement.

When I finished the third book  I had that sense of emptiness which was about coming to the end of a great experience. What will I read now? How could it possibly be as exciting? That is genuinely how I felt on finishing ‘The Hunger Games”.

So if you haven’t read the trilogy, get them now and live the Hunger Games!

I'm blogging about the things I love: music, sport, culture, London, with some photos to illustrate aspects of our wonderful city. I’ve written a novel called “The Decision”, a futuristic political thriller, and first of a trilogy. I’m also the author of a book on music since the 1970s called “ I Was There - A Musical Journey” and a volume of poetry about youth, “Growin’ Up - Snapshots/ Fragments”. All available on Amazon and Kindle.
View all posts by John S →
This entry was posted in Art, books, theatre, cinema and tagged books, District 12, Film, Jennifer Lawrence, Katniss Everdeen, Peeta Mellark, The Hunger Games. Bookmark the permalink.

10 Responses to “The Hunger Games” trilogy