The third test, the decider. The Lions, pretty lucky winners of the first, Australia deserved winners of the second. The momentum, therefore, seeming to be with the Aussies.

Selection bombshells delivered by Warren Gatland. Brian O’Driscoll dropped, not even on the bench. That it was to accommodate the return of Jamie Roberts as inside centre not questioned, but preferring Welshman Jonathan Davies was. Even though the latter had been one of the outstanding players of the tour. It just seemed like sacrilege. BOD. One of the greatest. Not even on the bench.

In the furore over O’Driscoll, hardly anyone seemed to notice that Ireland’s Jamie Heaslip had also been dropped as No 8, after playing the first two tests. Wales’ Toby Faletau was his replacement.

It felt like Gatland had pulled up the drawbridge, and inside were mostly his Welsh friends. Ten of the starting fifteen.

The media vultures were hovering, in expectation of an Australian victory…

In the office on Thursday I voiced confidence that the Lions would win ugly – forward power – to an Aussie colleague. But I didn’t real believe it. Those Aussie backs were just so good, and the Lions scrum hadn’t really asserted their strength over a whole game.

My friend Jon and I went on a cycling trip between Reading and Bath along the Kennet-Avon canal from Friday to Sunday – more of that in another blog. On Saturday morning, therefore, we found ourselves in the Borough Arms, in Hungerford, West Berkshire, watching the game. With free bacon rolls laid on by the landlord – good man!

And what a game it was! 41-16 to the Lions. All doubts blown away by a brilliant performance. Took time to take shape, but in the end we were celebrating with an air of incredulity. Did that really happen?

They say – in Northern hemisphere rugby at least – that the forwards win the game, the backs decide by how much. That’s a bit unfair on the backs, who put in a huge defensive shift, but there’s a certain truth in the adage.

The game started with a bang. Jonny Sexton kicked off. Will Genia, Australia’s star, dropped the ball. Pressure. Lions scrum, piling forward. In no time at all, English prop, Alex Corbisiero, was rolling over for a try. 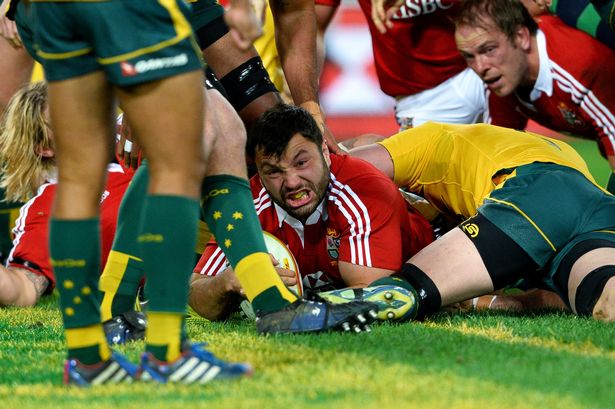 Leigh Halfpenny converted. Then the fun really began. The Lion’s scrum was awesome. The front row – Corbisiero, Hibbard and Adam Jones – absolutely mangled their Aussie counterparts. The referee, Raymond Poite from France,  favoured the dominant scrum, and the Lions won a succession of penalties. Leigh Halfpenny stepped up and converted them all. The first was from 50 metres. A statement of intent.

Maybe they couldn’t even believe it, because they let the Aussies back into the game. But inexplicably, the Aussie captain, James Horwill, chose not to go for the three points in a succession of penalties, which would have pulled his team close to the Lions’ score. Instead, each time there was a kick to touch and a line out, in the belief that a try could be scored from the set piece. And yes, it happened right at the end of the first half, James O’Connor wriggling over. Seven points and a psychological blow. But only seven points. Four converted penalties would get you twelve. (Yes, of course, history would have been different after the first one, but let’s assume the Aussies would have got more chances in the alternative universe too!).

19-10 to the Lions at half time, but with the force swaying towards the Aussies. and soon after half time they got a couple of penalties, which, now, Christian Leali’ifano kicked over. 19-16. Getting worried!

Then Australia put on some real attacking pressure. The Lions were on the back foot, but defending magnificently. This felt like the key moment of the game. If the Aussies broke through with another try, they would probably win. It was tense!

But relief, the Aussies spilled the ball. Knock-on. The Lions kicked away and the pressure was off.

And soon after it all went crazy. First the Lions, getting back into Aussie territory, won a penalty, which, of course, Halfpenny put over.  In eleven minutes, between 57 and 68, the Lions scored three tries. The first involved some great running and hands from Jonathan Davies, onto Leigh Halfpenny and then to Jonny Sexton, who scored. Then a brilliant solo run from Halfpenny after a Genia kick upfield, with a pass to George North, who finished it off. And then some clever play from substitute scrum half, Conor Murray, to set up Jamie Roberts for a surge through a shattered Australian defence.

It’s easy to look back and think it was inevitable. The Lions’ forward power discombobulated the Australians.  No doubt about that. So victory was inevitable. That’s the story now, embellished by three superb tries. The Aussie defence cracking under the pressure.

At 19-16 to the Lions, the Aussies were on top, and had their chances to go ahead. They blew it and things turned. Quickly. All the reports I’ve read talk of the game as if it was inevitable that the Lions would win. But it wasn’t. As ever it was all about fine margins. Until, maybe after the Sexton try, Australia’s morale sapped. Limbs became tired, tackles not quite as ferocious. And the Lions poured through.

Top level sport is almost always about those margins. Those moments in the game when, in retrospect, the tide turns. I think it was that Aussie knock-on when they were on top and pressing at 16-19.  The relief for the Lions was immense and the tries soon followed.

There’s no script beforehand. It’s all random. The narrative happens after the event.

This time it favoured the Lions. And so the brand grows stronger. Roll on New Zealand 2017!

I'm blogging about the things I love: music, sport, culture, London, with some photos to illustrate aspects of our wonderful city. I’ve written a novel called “The Decision”, a futuristic political thriller, and first of a trilogy. I’m also the author of a book on music since the 1970s called “ I Was There - A Musical Journey” and a volume of poetry about youth, “Growin’ Up - Snapshots/ Fragments”. All available on Amazon and Kindle.
View all posts by John S →
This entry was posted in Sportsthoughts and tagged Australia, Brian O'Driscoll, British and Irish Lions, Leigh Halfpenny, rugby, sports. Bookmark the permalink.