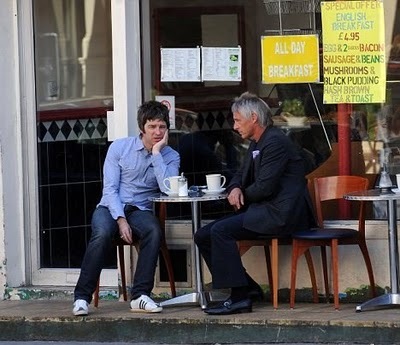 I’m writing a chapter on Britpop for my music book at the moment. And great fun it is too, remembering the escapades of Oasis, Blur, Pulp and all the rest, with Paul Weller, ex of The Jam and The Style Council appointed honorary head of class.  A music which, at its best, was rooted in the past but also fresh, sharp, optimistic – in sound if not always in word.

The music and the movement was at its height between 1994 and 1996. Oasis’s concerts at Knebworth in the summer of 1996 symbolise the peak of Britpop and also its descent into what the media started to call Dadrock. It wasn’t a compliment.

This is what I had to say about Dadrock… and Dads rocking, beyond when they were supposed to.

I do of course have to declare an interest. I’m a dad and I haven’t stopped loving pop and rock music, in all its forms. Even in my fifties.

So here goes. With “Champagne Supernova” to keep you company. One of Oasis’s finest, with Paul Weller guesting on guitar.

“So is this a Dad defending Dadrock?

The traditionalist side of Britpop – Oasis, Ocean Colour Scene, Cast, The Charlatans, Kula Shaker amongst them, with Paul Weller the honorary head of class, the mentor – started to attract oppopsition in the media as the music entered its Mannerist phase. It became Dadrock, with Weller the Modfather. All good press fun, but with a sinister intent – at least to dads. People like me. Age about 35 plus, I guess. Enough to suggest that we were looking back twenty or even thirty to identify the golden age, the halcyon days. At the height of Britpop that would imply the mid-sixties and the Beatles and Stones, and then in the late sixties the psychedelia and blues rock, R&B. Actually, having just become a dad in 1995, my golden age was a decade later: punk, new wave, drifting into the new Romantics, with David Bowie and Roxy Music striding imperiously across the whole period. But it’s fair to say that the Britpop bands, while referencing that period, rooted their music in the earlier period. Maybe it was their own dads the press were referring to. If the average NME writer was, say  20-25, his or her dad might be 45-55. Now they would be looking back to the sixties, maybe even Elvis.

I googled “dadrock” and got lots of American definitions, strangely enough. One wrote of a Holy Trinity comprising Eric Clapton, Jimmy Page and Jimi Hendrix. Well, as guitar heroes go, that makes sense. And America has always been more into guitar heroes and rock than us here in the UK.

So when the term arose, it was mainly about harking back to the second half of the sixties and a little bit of the seventies. The heyday, perhaps for Rock. Even though Britpop itself was indie and was pop. It made the mainstream. It wasn’t full of hairies playing long guitar solos. Apart from Kula Shaker….

And so now, even today, Dadrock has become a term of abuse. On the one hand it denotes musical conservatism. On the other, I think there is a bit of why do these people still like pop music? They are too old. If they like it, how can we, the younger generation like it? In the media anyway – I don’t think any other young people care. They are too busy enjoying their own lives.

I care, of course. I’m writing a whole book about the music I love, and love as much now, aged 54, as I did aged 14. The world has changed. Back in the 70s, our parents mostly hadn’t moved with the times. They’d look back to jazz, or Sinatra, or Elvis and would acknowledge The Beatles. But I doubt there were many 30 or 40 somethings in 1973 who were into Slade, or many Bowie or Pistols fans in 1977. A few, but not many. There was still the expectation that you would grow up  and shake off your pop leanings. Leave it to the youngsters. All just noise. All look like girls. All sounds the same…

Well, yeah, it’s just not like that anymore. Or doesn’t have to be. My generation, and the ones coming up behind me, have enjoyed our music and have the means to continue enjoying it: the technology, the concerts (and the money to pay for them), the festivals, and the longevity of the bands. Many splitting and then reforming when there is a chance to make serious money from the nostalgia. And we don’t all give up on new music either. If you grow up excited every week at what’s new in the NME  or on Radio 1, why should you lose that excitement later? It might be the Guardian and BBC 6 Music that you get your information from, or the web, Twitter, Facebook and countless other forms of communication. But you are still excited. About the new as well as the old.

Dadrock (which must now mean reverence for the 1980s and even 90s) and Dads – and Mums – rocking, are here to stay!

I remember another stereotype, conjured up in the 2000s, which was quite amusing. The Fifty Quid Bloke. David Hepworth, music journalist amongst other things, and one of the founders of The Word magazine (which sadly gave up the fight in 2012), is said to have invented the concept. Probably because he was that very bloke. It was the man who might go into HMV, or Virgin, or Borders to buy a CD, and come out with a CD or two, a DVD, a book, a magazine, mostly bought on impulse. Because he could. This stereotypical figure was keeping the music industry, the music (and DVD and book) industry alive. He had more spending power than teenagers, even if teenagers ultimately dictate where pop music is heading. He was both saviour and threat, because his love for the past was also leading to more conservative musical choices by the industry. Allegedly.

I had to laugh. Because I was one of those fifty quid blokes. In fact fifty quid was an underestimate.  I was pleased to be the saviour of the music industry and I was quite satisfied that I wasn’t holding it back.

But like so many people, I deserted the traditional retail model with the advent of Amazon and iTunes and all the rest. I stopped spending hours browsing in HMV and gave my money to Apple instead. I felt a bit guilty for a while. But we all have to move with the times…

The Dads moved on-line and so too did the music industry. It had to even if it didn’t want to. At least the Dads still paid for their music, unlike their sons and daughters. So they remained the saviours.

Yes, you can’t do it without the Dads.  They rule!”

I'm blogging about the things I love: music, sport, culture, London, with some photos to illustrate aspects of our wonderful city. I’ve written a novel called “The Decision”, a futuristic political thriller, and first of a trilogy. I’m also the author of a book on music since the 1970s called “ I Was There - A Musical Journey” and a volume of poetry about youth, “Growin’ Up - Snapshots/ Fragments”. All available on Amazon and Kindle.
View all posts by John S →
This entry was posted in Music - concerts, lists, reflections and tagged Britpop, Dadrock, Fifty Quid bloke, music, Oasis, Paul Weller. Bookmark the permalink.

7 Responses to Dadrock and Dads rock!