Aaah, I’ve been looking forward to this concert for so long, ever since I discovered Lindi’s music last November. I’ve played her three albums – “Cigarettes and Truckstops”, “Little Red Boots” and “Tin Star” – more than anything else recently. Put all three on an iTunes playlist and turned on shuffle. The Lindi Ortega triple album!

I wrote about her music in a recent blog on my Have You Heard? series. It’s country, but it’s soul, rock’n’roll, blues. The great sound of America.  Tonight the set naturally featured a lot of the latest album, “Tin Star”, but it was sprinkled with songs from the earlier albums and some wonderful covers. The sound was quite raw and bluesy, with Lindi and “Champagne” James Robertson on guitars, with a drum backing and no more. James Robertson played some amazing guitar, sometimes rocking, sometimes the blues, often eerie, and always complementing the incredible soulful voice of Lindi. I was surprised how often she ditched the guitar and just sang. But then the way she sang…

This is my best effort at the setlist. I knew most of the songs, but there were a couple of new, or unfamiliar ones.

Hard As This – Gypsy Child – Waiting on my Luck to Change – Tin Star – Desperado – Lived and Died Alone – Demons Don’t get me Down – Voodoo Mama – a new song, maybe called Cold Dark Ashes – one I wasn’t sure about – Bluebird – a blues/doo wop thing from a Canadian band – Little Lie – Encore: Ring of Fire – I’m So Lonesome I Could Cry –  Cigarettes and Truckstops – The Day You Die.

It seems wrong to pick out highlights, because it was all so good. But of course “Tin Star” was moving, with a lovely, humble preamble from Lindi, dedicating the song to all those singers who haven’t yet been lucky enough to get the break. She has worked hard and long to get where she is today and is clearly so appreciative. It was great to hear the Eagles’ “Desperado” given such a wonderful treatment. “Lived and Died Alone” was weirdly beautiful, with Lindi introducing its macabre lyrics with a touch of knowing humour. Likewise, she managed a self deprecating joke about the general gloominess of her subject matter, before she sang the upbeat “Bluebird”.  Except the gist of the song is that she isn’t a bluebird! 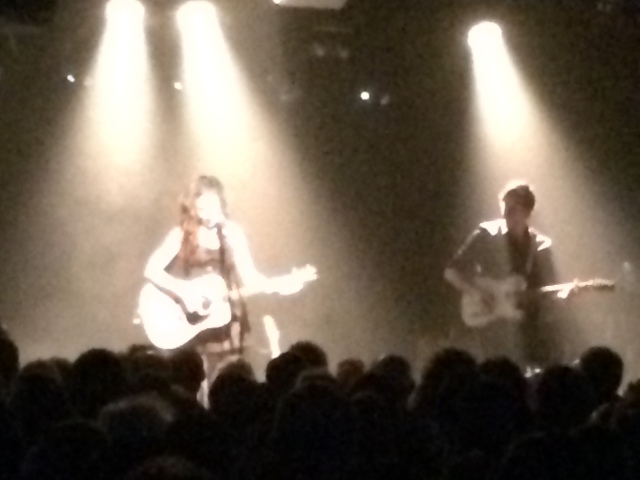 The encore was something else. Johnny Cash’s “Ring of Fire” was covered on Lindi’s first album, “Cigarette’s and Truckstops”. Here, live it was a raw blues, with Lindi in full voice and James doing all sorts of weird things on the guitar. Brilliant. Likewise “I’m So Lonesome I Could Cry”, written by Hank Williams and performed by so many, including Johnny Cash and Elvis Presley. And then, perhaps the highlight of the whole show for me, “Cigarettes and Truckstops”. Lindi described this as a song about an affair started when on the road. She was back in Toronto, her “date” in LA. She had to get there to see him again.  A familiar story, and resonant through its familiarity. And sung so movingly, on the album, and tonight at the Garage, that I can do no more than urge everyone to listen to it.  An achingly beautiful love song.

The set finished with the rock’n’roll of “The Day You Die”. Lindi promised to be at the “merch” stall, to sign things and have a hug. That was tempting!. But there was a long queue formed very quickly and I wanted to get home so I could write this while it was fresh in my mind. And I’ve got all the records already. So I didn’t linger.

Still, I felt a bit of regret, because I would have liked to tell her how much I loved the show, how I regard her as just about the best country singer I have ever heard (up there with Lucinda Williams, Gillian Welch, Laura Cantrell). And how, one day, she should do a duet with Bruce Springsteen. They could start with “I’m On Fire” which Lindi has already covered.  But maybe they could then sing “Tin Star” together.

Wow, how good would that be?

I'm blogging about the things I love: music, sport, culture, London, with some photos to illustrate aspects of our wonderful city. I’ve written a novel called “The Decision”, a futuristic political thriller, and first of a trilogy. I’m also the author of a book on music since the 1970s called “ I Was There - A Musical Journey” and a volume of poetry about youth, “Growin’ Up - Snapshots/ Fragments”. All available on Amazon and Kindle.
View all posts by John S →
This entry was posted in Music - concerts, lists, reflections and tagged concert, Lindi Ortega, music, The Garage Islington. Bookmark the permalink.

4 Responses to Lindi Ortega at the Garage, Islington, 30 January 2014