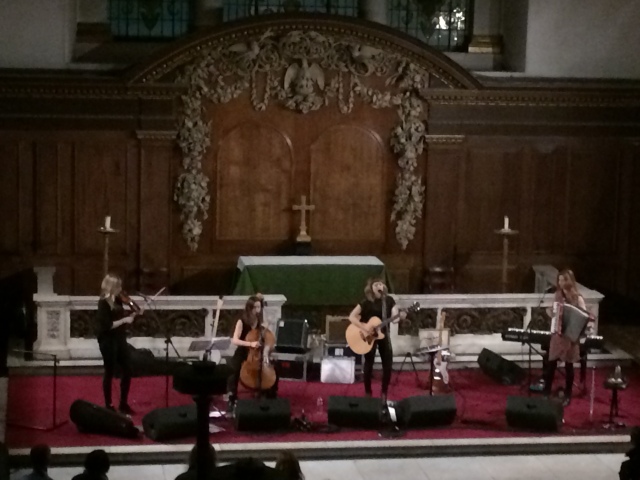 My wife, Kath, and I saw Emily Barker and the Red Clay Halo play one of their last concerts together tonight, in the unusual setting of St James’s Church on Piccadilly. The split is amicable – they are going their separate ways after nine years. The building was lovely, the acoustics just right for the beautiful music. Shame half the pews had terrible views, obscured by large wooden pillars, but we found a place upstairs that worked well, especially if you stood up.

Emily had invited requests for the show on Facebook and the show pretty reliably went through most of the old favourites like “Ropes”, “Nostalgia”, “Fields Of June” and “Witch of Pitteweem” and “Pause”, as well as a decent amount of songs from “Dear River”, which I now think is my favourite album. “Dear River” itself, which opened the show, “Letters”, “The Cormorant and the Heron”, “Ghost Narrative” and a heartfelt version of “The Blackwood” at the end. “Ghost Narrative” is for me the closest Emily comes to sounding like Bruce Springsteen, though she went one better tonight and played a Americana take of ‘Tougher than the Rest”. “Letters” has a wonderful, rousing chorus that builds to the point where I want it to break into a metal guitar solo, but of course it doesn’t. It’s still awesome though. 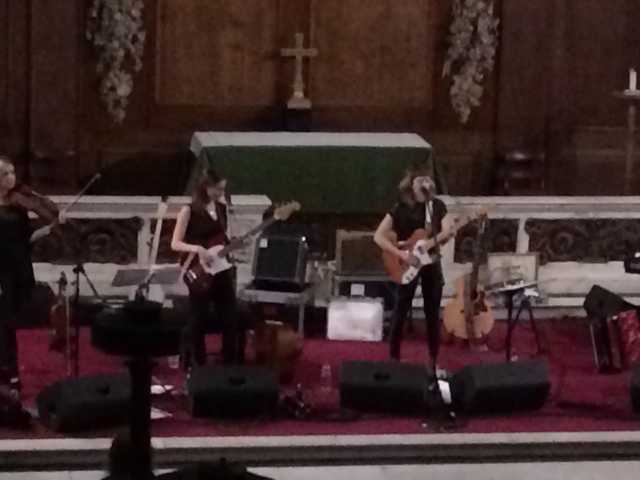 It was followed by a sublime violin solo by Anna Jenkins that sounded like an Irish folk piece. In the end it was an extended intro, I think, to a song called “Storm in a Teacup”.  There, in that beautiful church, it was a moment to touch the spirits.

As we walked to the church I thought of all the EB concerts I’ve been to since I discovered them at the Word in Your Ear event in March 2012. The song that really hooked me then and still transfixes me now is “Pause”, with Emily gently strumming an electric guitar and the Red Clay Halo – Gill Sandell, Jo Silverston, Anna Jenkins –  adding the most gorgeous harmonies. Ethereal! That song was the one I requested of course, along with “In The Winter I Returned” (which didn’t make it).

“Pause” was the first song of a trio in the encore. A moment of searing beauty. It was followed by a trip back to the first album, “Photos. Fires. Fables”, which has just been re-released on CD, with the lovely “Blackbird”. And then, rather fittingly, “Oh Journey” from the second album, “Despite the Snow”.  A poignant ending to a journey I hope they are all proud of. For me, Emily Barker and the Red Halo have provided me with so many of my favourite music moments over the past three years, since I discovered their music. I’ve been to six concerts, which I think is the second most I’ve seen of any band or artist live, beaten only by Elvis Costello.

I daresay Emily will continue to make excellent music in other guises, and I, for one, will be following that journey with interest.

Here’s that version of “Tougher Than The Rest”.

I'm blogging about the things I love: music, sport, culture, London, with some photos to illustrate aspects of our wonderful city. I’ve written a novel called “The Decision”, a futuristic political thriller, and first of a trilogy. I’m also the author of a book on music since the 1970s called “ I Was There - A Musical Journey” and a volume of poetry about youth, “Growin’ Up - Snapshots/ Fragments”. All available on Amazon and Kindle.
View all posts by John S →
This entry was posted in Music - concerts, lists, reflections and tagged Anna Jenkins, concerts, Emily Barker, Emily Barker and the Red Clay Halo, Gill Sandell, Jo Silverston, music, Piccadilly, St James's Church. Bookmark the permalink.