“I Was There” – my musical journey 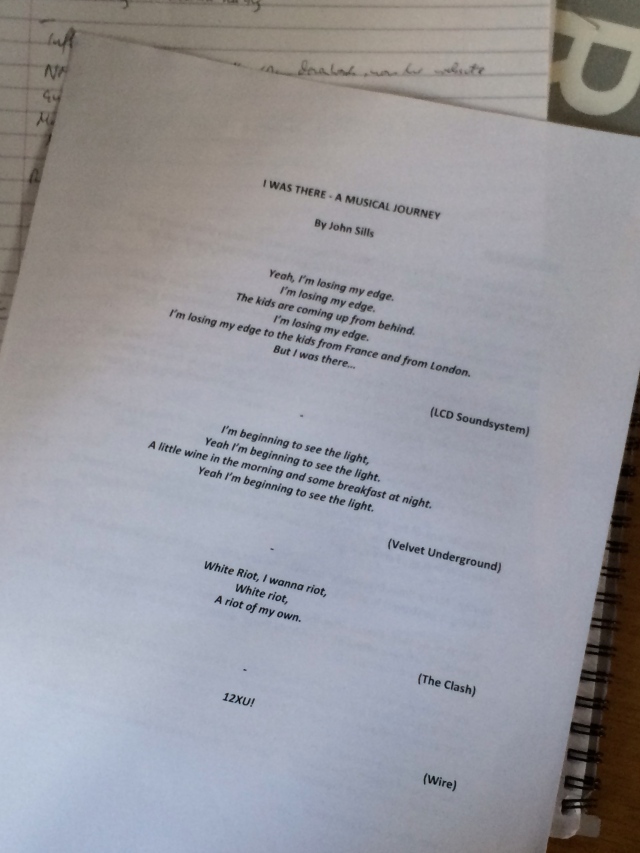 A big thing happened for me today. I finished the first draft of my music book, working title “I Was There – A Musical Journey”. The title reflects how I’ve always been there in spirit if not reality and because the brilliant lyrics of LCD Soundsystem’s “I’m Losing My Edge” speak to every ageing muso:

James Murphy then goes on to list how he was there for every cool musical event known to mankind! To a punching electro beat. So good and wonderfully ironic.

My book is sincerely about my love of music, but “Losing My Edge” keeps me grounded. As a 56 year old white middle class bloke, I know my place.

That said, I feel incredibly proud of what I’ve written, and I will be sharing it when it’s been edited and all the rest. It’s obviously not the first book to be written on the subject, but it is my story.

In that spirit, I thought I’d share with you a last, reflective piece I wrote today.

“Just before Christmas, 2012, Led Zeppelin released a DVD/CD of their wonderful 2007 reunion concert. When I first read about it, I spluttered, that can’t have been five years ago! I’d started writing this book before then, well before. How could it have been more than five years? It didn’t feel like it. And now it’s another two years on!

“So that’s at least seven. How many more am I bid?

“Well, I think it was in the summer of 2006 that I started in earnest. My first of a few notebooks of ideas and plans that I have kept starts on 16 August 2006, when I would have been on holiday in good ol’ Cala Gogo on the Costa Brava in Spain. I wrote a piece called “A Life Through Music”, some of which found its way into the introduction. There are some notes too, on the importance of The Clash and some reflections on some of those great concerts at Wembley Arena: Bruce in 1981, Talking Heads in 1984, Prince in 1987. One of my daughters, Rebecca, who was 7 years old at the time, has written at the top of the piece:

Well, not far off! My other daughter, Isabelle, same age, intervenes on the second page to list her favourites.

“So, eight years and five months later I have finally completed the first draft. Phew!

“It has been a labour of love, no doubt. Mostly written in snatches on evenings after work, or at the weekends, when I should have made more time, but always seemed to have something else to do. I’ve never been totally obsessive about the task, though it’s possible my family think I have been!

“A lot of the time dedicated to the task has actually been checking facts about record and concert timings, band members or listening to the music. I hold a fair bit in the memory banks, but not everything, not the detail. Hours digging out old vinyl, playing ancient NME cassettes, scouring Wikipedia to make sure I’ve got that album sequence right. Yes, Wikipedia: what a resource. Some people just criticise its accuracy in places, but for me it has been a godsend. Without it, I’d probably still be stuck on Chapter Fifteen, trying to figure out when the Bhundu Boys were formed!

“But I’ve done it. Editing will no doubt take a while. I may have to trim the quotes if I can’t get permission to use them before I publish it. But the first draft – the story – is done.

“My musical journey is far from finished. In many ways it has only begun. The discovery of new sounds and the rediscovery of old sounds is a constant source of delight and inspiration. Sharing the live experience with friends and family, sharing my thoughts with readers on WordPress, Facebook, Twitter. It is a world of endless possibilities.

“Time never stands still and nor does music. Music and time. Intangible, fundamental.

“The essence. The journey.”

I’ve been pondering whether to add another lyric to the ones on that page I took a photo of at the top of this piece. It’s by Emily Barker in her beautiful song, “In The Winter I Returned”. For her it’s about how she, as an Australian, has made England her home. But for me it sums up how I feel about this musical journey, and indeed, the journey through life…

Time passes and we stay,

All the choices I have made

Lead me to this place.

I'm blogging about the things I love: music, sport, culture, London, with some photos to illustrate aspects of our wonderful city. I’ve written a novel called “The Decision”, a futuristic political thriller, and first of a trilogy. I’m also the author of a book on music since the 1970s called “ I Was There - A Musical Journey” and a volume of poetry about youth, “Growin’ Up - Snapshots/ Fragments”. All available on Amazon and Kindle.
View all posts by John S →
This entry was posted in Art, books, theatre, cinema, Music - concerts, lists, reflections, Random stuff and tagged books, music. Bookmark the permalink.

11 Responses to “I Was There” – my musical journey