I and a few friends went to see Nils Lofgren at the Union Chapel last week. Who he? I hear you ask. Well, he’s a a great guitarist who made some excellent albums in the seventies and joined Bruce Springsteen’s E Street Band in 1984, as a replacement for Steve van Zandt. Little Stevie rejoined later, and Nils stayed. He has continued with his solo career in between stints with Bruce and has been touring Britain regularly, although this is the first time I have seen him solo. 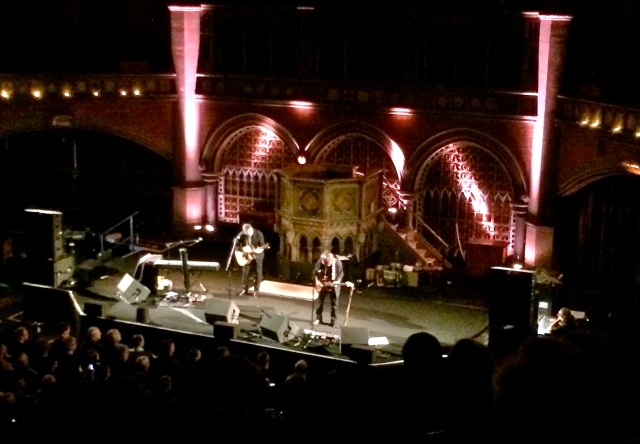 He’s now 63, but like so many great musicians, music has kept him young.

I remember buying his second solo album, “Cry Tough”, in 1976. It was a slight departure for me at the time. I was into metal, but veering towards punk, via Dr Feelgood and Eddie and the Hot Rods. I must have read a good review in NME, because I bought it with my limited funds while I was at school in Oakham in the East Midlands. It was mellower than most of my purchases, but the guitar sang and I loved the plaintive air in his voice. It’s an album I’ve loved ever since. Songs like “Cry Tough”, “Mud In Your Eye” and “It’s Not A Crime”. Timeless music. His eponymous debut album was pretty good too. It featured the classic tribute to Keith Richards, “Keith Don’t Go”, and had a couple of lovely ballads, “Going Back” (A Goffin and King song) and “Two By Two”. The third solo album, “I Came To Dance” had a good title track, but not much else grabbed me, and in the maelstrom of punk and new wave, I lost touch with Nils.

Until, of course he became part of the E Street Band…

We thought he’d be entertaining at the Union Chapel, but he was more than that: he was incredibly good. Great songs, with a few of those old seventies favourites, but more than anything, some astounding guitar. It was a largely acoustic show, although he picked up the electric guitar, complete with trademark scarf hanging from the neck of his axe, a couple of times, including for a rousing version of Springsteen’s “Because The Night”.  He was accompanied by Greg Varlotta who variously played trumpet, guitar and keyboards, with added tap dancing! Nils put his own dancing shoes on to join him for an encore, you guessed it, of “I Came To Dance”.

Nils told some engaging stories in between songs and just wowed us with his virtuoso guitar. There was a magnificent slowed down version of “Keith Don’t Go”, but best of all was a song called, I think, “Girl In Motion”. He created an insistent guitar rhythm, put it on loop with his bank of pedals and then played an amazing, intricate guitar solo over it. It reminded me of when I went to a classical guitar concert in a hilltop town in Catalonia, called Pals, in the summer, while on holiday. Beautiful patterns of sound. Nils is a maestro.

We came out exhilarated, expectations exceeded. We waxed lyrical over a couple of pints in the pub about his past music, the Bruce connection, and the marvels of his guitar playing. You don’t really need to know much about him to enjoy that.

In the words of one of Nils’ own songs, the sun hasn’t set on this boy yet!

I'm blogging about the things I love: music, sport, culture, London, with some photos to illustrate aspects of our wonderful city. I’ve written a novel called “The Decision”, a futuristic political thriller, and first of a trilogy. I’m also the author of a book on music since the 1970s called “ I Was There - A Musical Journey” and a volume of poetry about youth, “Growin’ Up - Snapshots/ Fragments”. All available on Amazon and Kindle.
View all posts by John S →
This entry was posted in Music - concerts, lists, reflections and tagged London, music, Nils Lofgren, Union Chapel London. Bookmark the permalink.

6 Responses to Nils Lofgren at the Union Chapel, Islington, 15 January 2015