The last couple of Friday evenings, after finishing work, I’ve walked to South Kensington tube from my place of work on Millbank, by the Thames. It takes about 45 minutes, winding through Pimlico, the bottom end of Belgravia, Sloane Square, the Kings Road, deepest Chelsea and then South Ken. Posh London, you could say. It’s a lovely walk, and one of the highlights is St Luke’s church, hidden in the middle of Chelsea’s opulent housing. Until I started doing this walk a couple of years ago I had no idea that the church existed.

Not exactly hidden London, but undiscovered on my part. It has some attractive gardens on one side and a load of five-a-side football pitches on the other. The church was designed by James Savage in 1819 and was part of a Gothic revival architecturally. It was built as Chelsea expanded from a village on the fringes of London to an integral part of the city. Charles Dickens married Catherine Hogarth there in 1836. 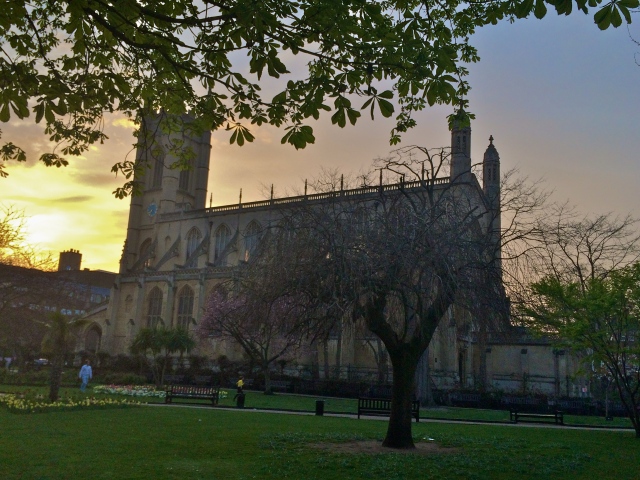 I'm blogging about the things I love: music, sport, culture, London, with some photos to illustrate aspects of our wonderful city. I’ve written a novel called “The Decision”, a futuristic political thriller, and first of a trilogy. I’m also the author of a book on music since the 1970s called “ I Was There - A Musical Journey” and a volume of poetry about youth, “Growin’ Up - Snapshots/ Fragments”. All available on Amazon and Kindle.
View all posts by John S →
This entry was posted in Photos - lovelondonscenes and tagged Chelsea, London, Photography, photos, St Luke's church. Bookmark the permalink.