Tonight Brian Eno gave a brilliant talk at the BBC 6 Music annual John Peel lecture. His theme was the importance of art and culture and that it wasn’t just about contributing to GDP or getting a job. Early on he came up with a very telling phrase: “Art is everything you don’t have to do”. It’s the extra mile we go as human beings, beyond the necessary.

How true that is, and it justifies all the time I spend on this blog – and my music book, “I Was There – A Musical Journey”, which I have now finished. Just have to compile some kind of index, design a cover and find a printer. Then it will be ready to give to friends, though it’s still a way from any commercial publication.

I’ve been playing around with photos for the front and back covers. The front I’m quite set on. In 2014, I saw Fat White Family at Latitude, in the i-Arena. I took a few snaps on my iPhone which were completely distorted by the flashing lights. But they gave me a subject – the lead guitarist. I love the pose, the big hair, the rawness. I’ve distorted it further, with room at the top for the book title.

Here’s the sequence from the original… 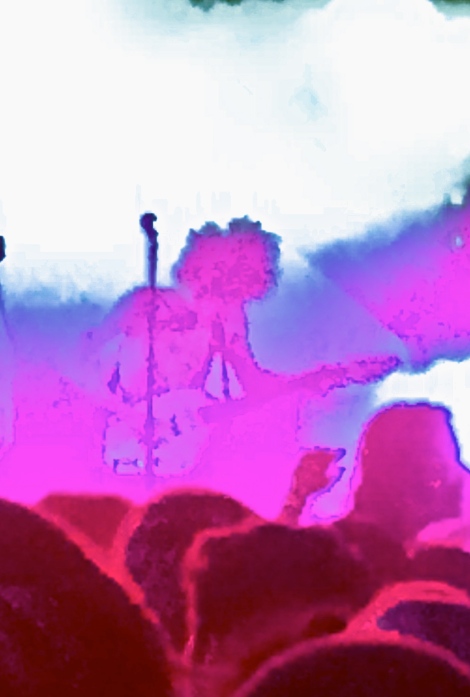 For the back cover I thought about nicking the sort of thing Bob Dylan did on “Bringing it all Back Home” and Oasis did on “Definitely Maybe”. Other than themselves, a few iconic objects spread about the place. Albums to the fore. And my guitars, of course. So I tried some variations. Then I thought, what about me playing guitar? A bit pseudy, but why not?  I got Kath to take a few snaps on the iPhone.

So here are a few options. I’ve numbered them and would be interested in any views you have on what you think would work best. 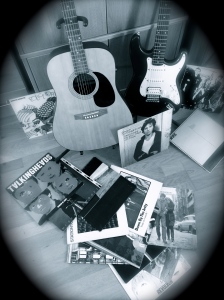 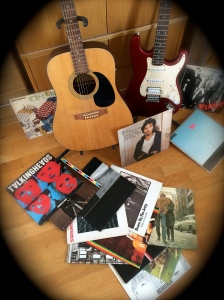 3 and 4. Books, West Ham scarf and trainers make an appearance. Too much information, possibly. 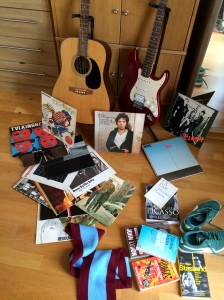 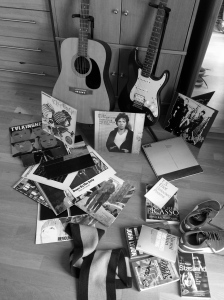 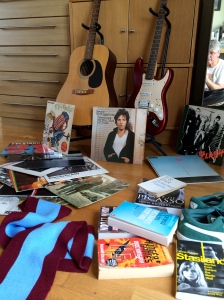 6 – Keeping it simple. But with whole of guitars and photo of Kieran at young age sneaking in. And Daddy’s little monkey, which Isabelle gave me one Father’s day.

9 – Bowie plectrum on Radiohead box set cover. Sums up quite a lot. 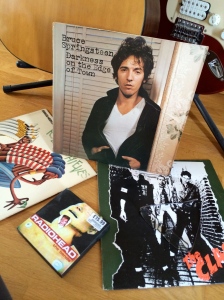 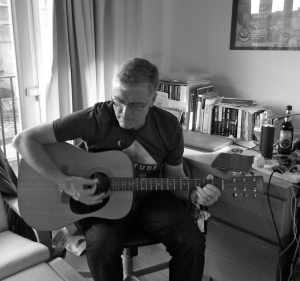 12, 13, 14  – Me x 3! Without beer. I kind of like this and the original (12) is now on my Facebook and WordPress photos, instead of some crappy iMac shot I took in haste back when I started. Having said that, I make no claims about my guitar playing. I strum a few chords – that’s it.

I'm blogging about the things I love: music, sport, culture, London, with some photos to illustrate aspects of our wonderful city. I’ve written a novel called “The Decision”, a futuristic political thriller, and first of a trilogy. I’m also the author of a book on music since the 1970s called “ I Was There - A Musical Journey” and a volume of poetry about youth, “Growin’ Up - Snapshots/ Fragments”. All available on Amazon and Kindle.
View all posts by John S →
This entry was posted in Random stuff and tagged music, photos. Bookmark the permalink.

10 Responses to Choosing a book cover