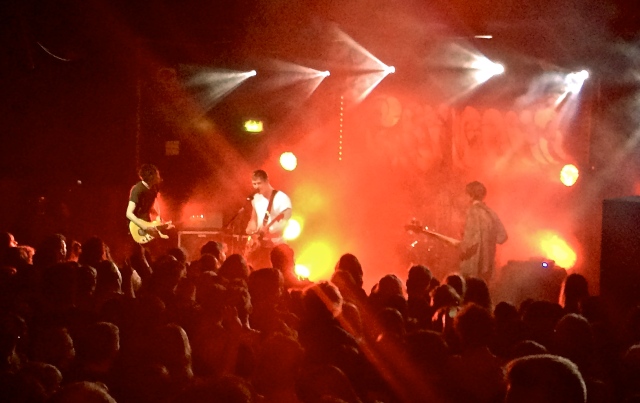 Gengahr at the Scala was always going to be good. Their album, “A Dream Outside” is almost certainly going to be my album of 2015, unless the new Chvrches release takes over. They were excellent at Latitude, in a half hour set. So it was just a question of whether they could translate that to a whole performance.

Of course they could!

The set was mainly the album in a different order, of course. But there were one or two unfamiliar tracks in there – whether they were from previous EPs or new, I don’t know. Strangely they opened the set with one of them. It may have been called “Loki”, judging by reviews of earlier concerts. Wasn’t a great move, as I would have thought you want your audience to get going straight away. The album opener, “Dizzy Ghosts”, works perfectly, as it did at Latitude. Anyway, the second track played was “Heroine”, which is one of the best, and it was plain sailing from there.

I’ve written about Gengahr previously. They play classic indie music with a twist. Felix Bushe’s falsetto vocals add a hint of vulnerability to the tunes. The guitars veer off in odd directions at times. There is something unsettling about it all, but also beautiful. The melodies throughout the album grow on you with every listen. So it’s a bit weird, but basically really good pop music.

Live the guitars come to the fore. A lot of the songs follow a classic indie slow – fast – slow – very fast pattern and mean that most of the songs end with a rousing climax. Great for the live experience.

So a tried and tested formula, but the best I’ve heard since who? Arctic Monkeys?

My three favourite songs right now – as with all great albums, this shifts around – were the last three. “Powder” ended the main set and gave Felix the opportunity to wander into the crowd as the riffs built. The encore began with “Lonely as a Shark, which may have the loveliest melody of all, and Felix appeared solo for the first part, before the rest of the band joined him.

And then, of course, we ended with “She’s a Witch”. A wonderful refrain, which the crowd sang in unison. It must be inspiring, early in your musical career, to have a song which everyone sings along to. Harmony with the audience.

A great concert then. I think Gengahr should become massive, but you just don’t know.  If the teens catch on to them, they’ll be a shoo-in. If it’s the Uni students, they’ll be Indie-big but not Pop-big. Right now, looking at the crowd at the Scala it’s the student posse (and a very few oldies like me).

Hopefully they’ll stick to what they believe in and see what turns up. And become huge.

I'm blogging about the things I love: music, sport, culture, London, with some photos to illustrate aspects of our wonderful city. I’ve written a novel called “The Decision”, a futuristic political thriller, and first of a trilogy. I’m also the author of a book on music since the 1970s called “ I Was There - A Musical Journey” and a volume of poetry about youth, “Growin’ Up - Snapshots/ Fragments”. All available on Amazon and Kindle.
View all posts by John S →
This entry was posted in Music - concerts, lists, reflections and tagged concerts, Gengahr, London, music, Scala Kings Cross. Bookmark the permalink.

4 Responses to Gengahr at the Scala, Kings Cross, 8 October 2015