I went to a concert on Thursday night just gone in Exmouth Market Centre. I guess you’d call it Clerkenwell. Not an area I know particularly well, but Exmouth Market looked cool – loads of restaurants, cafés and bars.

The concert was by Applewood Road. They were singing songs from their first and maybe only album, also called “Applewood Road”. The singers were Emily Barker, Amy Speace and Amber Rubarth. Emily’s music, of course, you’ll know I love, if you follow this blog. Amy and Amber were new to me. Both are based in Nashville now, though Wikipedia says they are from Baltimore and California. Amy referred to New York too.

They met in a Nashville cafe, brought together by mutual friends. They hit it off immediately and started making music together the next day. A one off track, Applewood Road, was well-received and that encouraged them to make an album. Which, tonight, they shared with us.

They were sensational. They each played four of their own songs in turn before coming together to sing songs from the album – and at least one beside. Emily went first. She started with a song on the piano, dedicated to Sister Rosetta Tharpe, sometimes regarded as the founder of rock’n’roll. That was followed by an unaccompanied song. Sung beautifully, of course. Then another new piece called “Over My Shoulder”. Finally we got “Disappear”, which was on her second album “Despite the Snow”. She has a new look too: short dark hair and quite a 60’s style outfit. Thinking of those singers who combined soul and country at that time? I was thinking Dusty Springfield for some reason.

Amber Rubarth was next . Lovely, simple songs, beautifully played and sung. I couldn’t help thinking of Jessica from the Staves. And finally Amy Speace. She told some good stories about a catholic girl from the North East locating to Nashville. She sang a moving song called Ghosts, which told the tale of her grandmother who waited 18 years to marry a man she met when they both worked on a passenger ship. He a Southern Baptist, she a Northern Catholic. She had vowed to look after her ailing parents until they died. 18 years.

Together, as Applewood Road, they were awesome. All the songs were new, but they immediately felt much-loved. They shared the guitar and singing duties. Emily played some banjo and harmonica. The harmonies were fantastic. Engrossing from start to finish. And, as well as songs from the album, they sang a truly beautiful version of REM’s “Losing my Religion”, which I think Amber has recorded previously. Unforgettable. 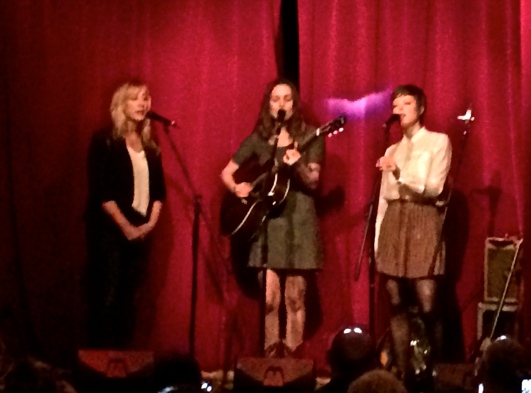 I had to think of the Staves, although their backgrounds and personalities and experience are quite different. But there is a shared love of American folk, country and soul – and those harmonies.

I don’t think “Applewood Road” is a long term project. They are doing a short tour of southern England and a few dates in the US, I think. But this is such a great start that I hope they give it another go.

I'm blogging about the things I love: music, sport, culture, London, with some photos to illustrate aspects of our wonderful city. I’ve written a novel called “The Decision”, a futuristic political thriller, and first of a trilogy. I’m also the author of a book on music since the 1970s called “ I Was There - A Musical Journey” and a volume of poetry about youth, “Growin’ Up - Snapshots/ Fragments”. All available on Amazon and Kindle.
View all posts by John S →
This entry was posted in Music - concerts, lists, reflections and tagged Amber Rubarth, Amy Speace, Applewood Road, Emily Barker, London Exmouth Market Centre, music. Bookmark the permalink.