I first came across Julia Jacklin at the End of the Road festival in September last year. The programme gave her a good write up, describing her music as a cross between alt. country and grungy lo-fi. I read about her love of pop music too, so her gig in the Tipi tent seemed worth checking out. Unfortunately it was the day that it pissed down with rain, and it was packed when we got there. We stopped for five minutes peering right from the back and decided to go somewhere else.

But I didn’t lose interest. I bought her debut album, “Don’t Let The Kids Win” and enjoyed it. Enough to put it in my top ten for the year. And we saw her again at Koko supporting Whitney. She only played a few songs, but I loved the sparse beauty of them. I needed to hear more.

Meanwhile, the album just grew and grew on me. And it was the ballads, the slow ones, that really did it for me, though I loved the whole lot. It started with “Motherland”. One day, just listening on the tube as I went into work, I had one of those moments when you realise how brilliant a track is. It was the way Julia’s voice slowly built over the music. It had that flow that just hits you, takes you with it. I was hooked. And with that, the beauty, the duende of some of the other songs became clear to me. This year, it has been an album I can’t stop playing. The one I turn to when I’m in a reflective mood. Songs like “LA Dream”, “Don’t Let the Kids Win”, “Same Airport, Different Man”, ”Hay Plain” are right up there with “Motherland”.

Julia’s ballads all have a musical simplicity, where she strums an electric guitar and there’s a sparse back beat. It’s the melody and her vocals that colour in the picture. Her voice has a vulnerability, but it’s not fragile – it’s expressive, it rolls. I’m influenced by my current reading here. Keith Richards’ “Life”. A fascinating and funny book, and most interesting when he talks about his philosophy of music. He is a disciple of simplicity, leaving space, letting the music breathe and express itself, without being overloaded. He is inspired by the blues masters. When it comes to rock and roll, he is about the roll, the groove. And this is what I get from Julia Jacklin too. Nothing is overdone. The music is stripped down to the essentials. But she has feeling.

And so I was really looking forward to last night’s concert at the Scala. I couldn’t persuade any of my friends that she was too good to miss, so I went on my own. It was sold out, the audience mostly in their twenties, early thirties, I’d say. I’m always interested to observe the demographic that someone attracts. I prefer it when the place is not just full of people like me!

Yeah, I’m biased now, but it was wonderful from start to finish. First song was “Hay Plain”, which is a lo-fi grungy thing which starts slow and builds up into a solid thud by the end. “Lead Light” – one of the poppier numbers (think “Rumours” Fleetwood Mac) – came next. And then we were into “Motherland”. Oh yeah! Julia’s voice completely captivating. There was a new song next and then “LA Dream”, where the band went off and left Julia alone with her electric guitar and voice. It was awesome.

And so it continued. Most of the album was played, plus another new song, which I think was called “Eastwick”. It built like “Hay Plain”. 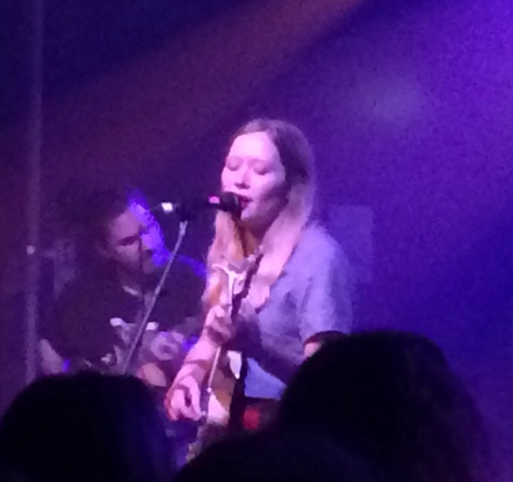 Two of the more upbeat (and most popular) songs, “Coming of Age” and “Pool Party” came towards the end and got everyone going. But last song was the lovely, rather sentimental, “Don’t Let the Kids Win”. Again, this was Julia solo. It’s a song about keeping your family ties. The title is deceptive – it’s not anti-kids, it’s let them learn, support them. If you want to hear the song try this.

Julia and the band came back for one song, which was a cover of the Strokes “Someday”, done quite differently. I wouldn’t have minded Julia solo again for “Same Airport, Different Man”, but you can’t have everything.

I just loved this concert. A singer making her way, chuffed at selling out the Scala. Getting bigger. She’s doing the UK festival circuit this year, and I’ll being seeing her at Field Day and End of the Road. Still hoping she’ll be added to Latitude. Music I never tire of. Give the album a try and go and see her!

I'm blogging about the things I love: music, sport, culture, London, with some photos to illustrate aspects of our wonderful city. I’ve written a novel called “The Decision”, a futuristic political thriller, and first of a trilogy. I’m also the author of a book on music since the 1970s called “ I Was There - A Musical Journey” and a volume of poetry about youth, “Growin’ Up - Snapshots/ Fragments”. All available on Amazon and Kindle.
View all posts by John S →
This entry was posted in Music - concerts, lists, reflections and tagged concerts, Julia Jacklin, music, Scala Kings Cross. Bookmark the permalink.