Three concerts in a week

I managed to pack in three concerts this week, while work was pretty intense too. I was pretty pooped by Friday evening – it took all my energy to watch the Masters on the TV. I’m writing this on a lazy, sunny Saturday, which is just what I needed. But no complaints about the gigs – they were all memorable.

It started on Monday, with a trip to the Roundhouse, to see Grandaddy, supported by my great favourites, Amber Arcades. On Tuesday it was the Village Underground in Shoreditch, to see Moonlandingz, supported by Goat Girl. After an evening off on Wednesday (which just meant I stayed late at work), it was the Royal Albert Hall to celebrate the 80s classic album “Lexicon of Love” with ABC. A few contrasts there!

Starting with Monday then, my friends Jon E and Dave and I headed to Camden for our customary pre-gig feast at Sushi Salsa on Camden Lock before heading up to the Roundhouse. First on were Amber Arcades. A big step up for them – an important moment. You could see that in their body language – there were undoubtedly a few nerves. But they played a good set, including all my favourite tunes: “Come with Me”, “Fading Lines”, “Constant’s Dream” and “Turning Light” included. There were a couple of new tunes, including new release “Can’t Say we Tried”, which has definite anthem potential. The sound was a bit bass-heavy at first, which meant some of the subtlety and flow of the songs was lost – at least for me, because I know them so well.  But that got better and they got a good reception from a Grandaddy crowd. 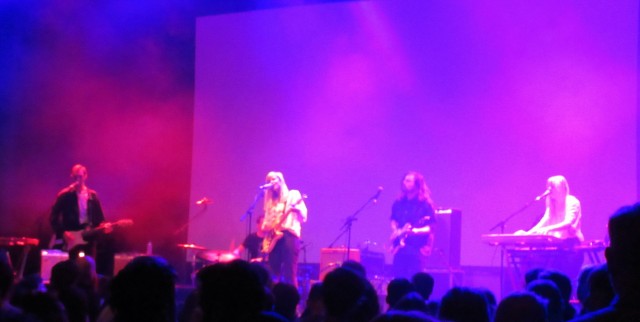 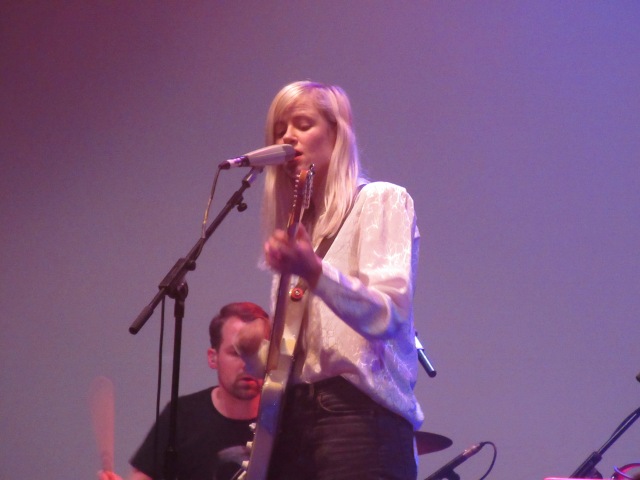 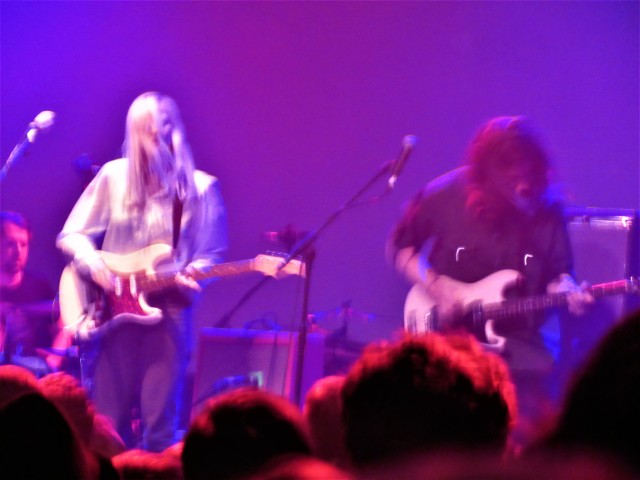 And yes, there is a Grandaddy crowd. The place looked sold out and there was a mix of ages, even though, until recently, the band’s last album was in 2006. There was a real energy too, in the response to the music. That’s a kind of Americana-plus; there’s greater sense of pop melody and some electronic doodlings in the mix. They’re in the same sort of category as Mercury Rev, Flaming Lips, Wilco, Fleet Foxes, even Bon Iver. What, for want of a better term, I called in my book “I Was There”, American pastoral. I downloaded the new album “Last Place” the weekend before the show, and really liked it. Quite poppy, even rocky, early on, but with some lovely, wistful tunes towards the end. It was one of the featured albums at Rough Trade East when I went there on Saturday afternoon – the band have indie credibility.

The show was captivating, helped by an intriguing film backdrop. Probably helps, as the band themselves are a modest lot, dressed in standard Americana gear. They’re not going to leap around the stage. The musicianship was top level and some of the songs felt like anthems – a lot of the crowd knew the words. You didn’t need to know the songs to enjoy them. I came away pretty impressed, having enjoyed them more than I expected. 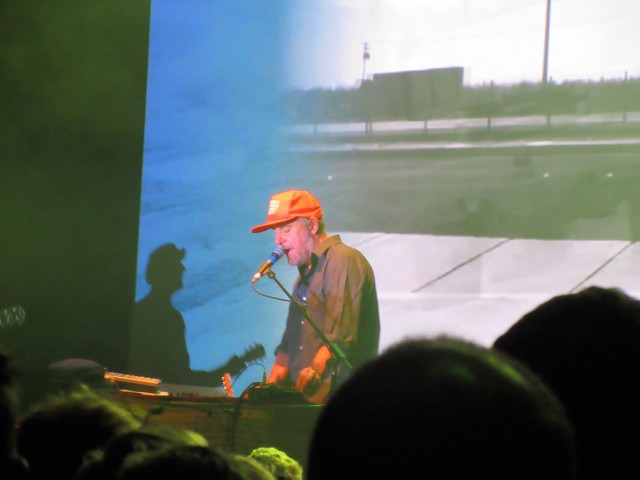 And I was pleased for Amber Arcades – the main reason for going, in my case. They did well and I hope it’s a stepping stone to greater things. A long haul.

Tuesday was my friend Jon G’s initiative. He, as am I, is a fan of The Fat White Family, and Moonlandingz is, is part an offshoot of FWF. The main singer, Lias Saudi, is in both, and just as crazed in Moonlandingz as he is in FWF. You do wonder if he’ll last the pace he’s set himself. When we got there a young punky three piece were on. I didn’t catch their name, unfortunately, but they made a good noise. 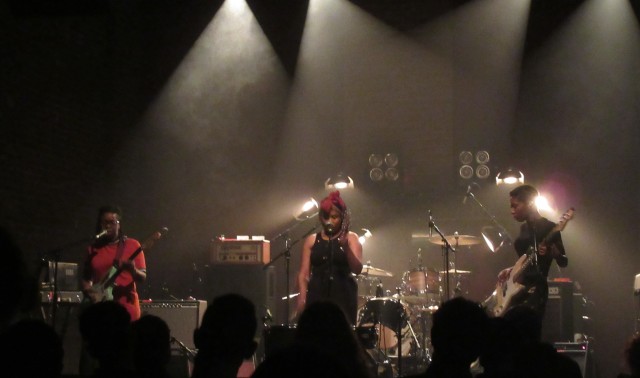 Next up were a support band we wanted to see, called Goat Girl (and I’ve just realised we missed a previous opportunity, as they opened for Parquet Courts and Eagulls last year at the Kentish Town Forum). They have a growing reputation, and are playing Latitude this year. Another all-woman indie/punk band – a good thing. They are from South London and play raw, jagged songs that veer off in interesting directions – it’s not an all-out punk thrash. Good when it is though! Really enjoyed their set, which, alone, made the evening worthwhile.

(The hats came off, but my photos weren’t great – strong lights).

And then Moonlandingz. Well, they started with some high energy, glam-stomping riffs which caused immediate moshing. Looked promising, if a bit chaotic – there were a lot of band members. Lias prowled around with a bottle of red wine and shouted a lot. As did everyone else. But after about three songs, something went wrong for me. I just start to feel, this is taking the piss. And I got bored. I felt like it was just a bit too contrived – like, what can we do to get them moshing, as opposed to, what is it we care about, love playing? I’m sure I’m doing them an injustice, and most of the crowd were loving it. So maybe I just wasn’t in the mood for that type of thing on the night. Maybe it was comparing them with Goat Girl, who had that sincere passion. Jon thought it was brilliant, and it’s not often we have such divergent responses. So, yeah, maybe it was just the circumstances. I’d happily check them out again at a festival, if they were on, and I might change my mind completely.

On to the Albert Hall, for a night of pure, new romantic nostalgia. ABC, backed by full orchestra. Playing “The Lexicon of Love”, their one big album. The tunes that everyone of a certain age remembers being “Tears are not Enough”, “Poison Arrow”, “The Look of Love” and “All of my Heart”.  And they went down a storm. There was a great deal of Mum and Dad dancing. And it was unabashed fun. Singer Martin Fry was on great form, replete in gold lame jacket for the second half of the show, when they played “Lexicon of Love”. The first half was good too – a mix of old and new – but of course it was the classics that everyone was there to celebrate. Much to-and-fro pointing  between Martin and the audience was had. The encore was an encore, in the French sense of the word: they played “Look of Love” again. And everyone went away happy. A spirit-lifting evening. 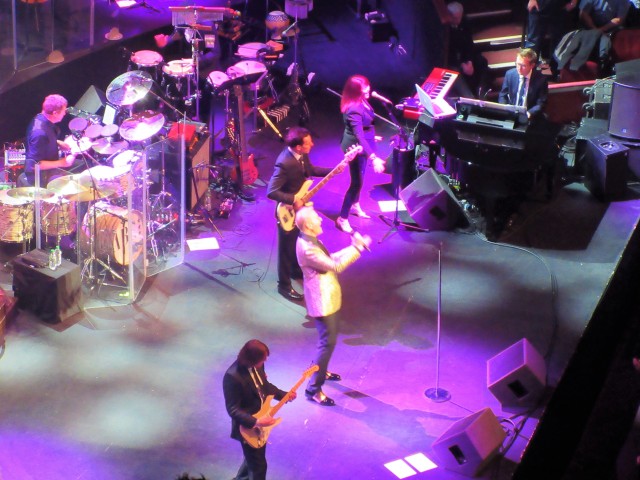 So, some pretty different bands over the week. I’d have to say the highlight was the ABC classics, followed closely by Amber Arcades (because I love Amber Arcades) and Goat Girl (because I love new, passionate, daring, rocking music). Grandaddy, very good, but not really a band to excite me; and Moonlandingz memorable, if not entirely for the right reasons on the night.

I'm blogging about the things I love: music, sport, culture, London, with some photos to illustrate aspects of our wonderful city. I’ve written a novel called “The Decision”, a futuristic political thriller, and first of a trilogy. I’m also the author of a book on music since the 1970s called “ I Was There - A Musical Journey” and a volume of poetry about youth, “Growin’ Up - Snapshots/ Fragments”. All available on Amazon and Kindle.
View all posts by John S →
This entry was posted in Music - concerts, lists, reflections and tagged ABC, Amber Arcades, concerts, Goat Girl, Grandaddy, London Roundhouse, Moonlandingz, music, Royal Albert Hall, Village Underground. Bookmark the permalink.

3 Responses to Three concerts in a week