Hanwell is a West London suburb, in between Ealing centre and Southall. Like quite a lot of west and south west London, it is part of the history of the 60s blues and rock’n’roll artists who took their cue from America’s traditions and made the sounds universal. Marshall amps began in Hanwell too. In 2013, the Hootie began. In that first year there were 13 bands in there official pubs. This year there are 85 bands in 14 venues, including two new outdoor areas, one by the historic Hanwell Viaduct, built by Brunel, and still a railway line into Paddington.

Strangely, I only went for the first time last year. It was pouring with rain, the pubs were all packed out and it was almost impossible to get a beer. I felt like it had become a victim of its own popularity. It was still really busy this (dry) year yesterday, but I sense that the two new park venues will have taken some of the pressure off. They also allow families to stay on longer.

Kath and I went along at about 7pm. Other duties called before that. Mainly, in my case, recovering from two work leaving do’s in two days and watching Harlequins last game of the season away to Northampton on BT Sport! We got the losing bonus point that means we qualify for the European Champions Cup next year, as sixth-placed team in the Premiership.

We saw three excellent bands while we were there. None are big names yet, but they all could be. First up were Rews, at the Village Green pub. It was rammed. Rews are Shauna Tohill and Collette Williams, one from Belfast, the other from London. Guitar and drums. Just like Honeyblood! I read the blurb that said BBC Radio s 1 and 6 were already interested and thought they sounded just right. And they were. They rocked! And the crowd reception was brilliant. Live of course, the guitar is louder, more distorted, and the drums piledrive. There were melodies in there, but the riffs were the thing, and they were good.  When we got home I checked their videos of four singles they’ve released, and the melodies got a bit more space. The parallels with Honeyblood are definitely there, if not quite the celtic melancholy of some of Honeyblood’s best – yet. I’ll definitely be looking out for Rews.

(Couldn’t get a decent photo of the band – too many tall blokes taking pictures. Er, like me!)

We tried something different after that – some jazz funk in the Viaduct meadow big top from a band called Okapi. They looked every inch the Shoreditch hipsters, though I’m not sure any of them are actually from London. All three guitarist/bassists had beards and the required clothing. They played some sharp rhythms, while singer Gina Tunbridge had a strong and soulful voice. I was getting a bit of the Brand New Heavies, a band I really liked in the 1990s.

We then went over to Sandy Park, which is bang in the middle of housing, so I wonder how they got permission. But it had a really nice vibe. It was close to many of the pub venues, and there were still loads of kids running around as Du Bellows laid down their 70s rock riffs and conscious lyrics. Jimmy Page is apparently a big fan, which is quite an endorsement. They are heavier than Zep, on the basis of last night’s performance. Somewhere between Zep and Black Sabbath, but with singer Jade Williams doing a bit of a Grace Slick/ Robert Plant thing too. I really liked them, and there were vociferous demands for an encore from a decent-sized crowd. Didn’t happen – they have to keep to time. They are playing at the Half Moon in Putney in June and I shall try to catch them again there. Still love a good bit of metal! 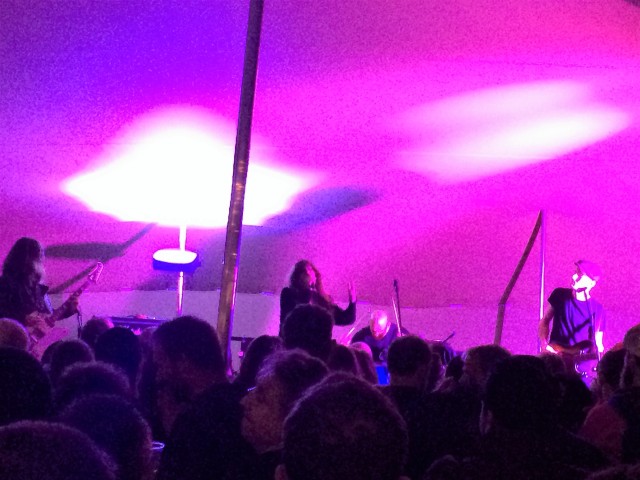 We called it a day after that, at 9.30. There were still a couple of hours left and I’m sure we would have seen some more excellent artists – if we could get in. It’s not a festival for fully established bands, but many of them are making strides, and from what I heard this year, deserve success. Competition is hot though. I wish Rews, Okapi and Du Bellows the best of luck!

I'm blogging about the things I love: music, sport, culture, London, with some photos to illustrate aspects of our wonderful city. I’ve written a novel called “The Decision”, a futuristic political thriller, and first of a trilogy. I’m also the author of a book on music since the 1970s called “ I Was There - A Musical Journey” and a volume of poetry about youth, “Growin’ Up - Snapshots/ Fragments”. All available on Amazon and Kindle.
View all posts by John S →
This entry was posted in Music - concerts, lists, reflections and tagged concerts, Du Bellows, Hanwell Hootie, London, music, Okapi, Rews. Bookmark the permalink.