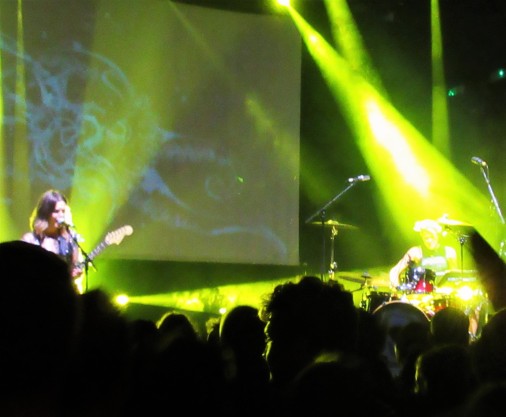 I’d been waiting for this one with real anticipation, ever since it dawned on me that Honeyblood had made two of the finest albums that I have heard for a long time. When I reviewed “Babes Never Die”, I was just getting into them. Since then I’ve hardly listened to anything else (only Slowdive made inroads). I love the combination of punky rhythms, great pop melodies, with plenty of singalong moments, feisty lyrics and some real melancholy soul – celtic soul. And for all the rock’n’roll exuberance, the two tracks which have resonated with me most are two of those with the celtic soul – “Hey, Stellar” and “Cruel”, poignant songs about breaking up, coping with life’s messes. Sung with such tenderness, regret and in “Hey, Stellar”’s case, defiance, by Stina Tweeddale. 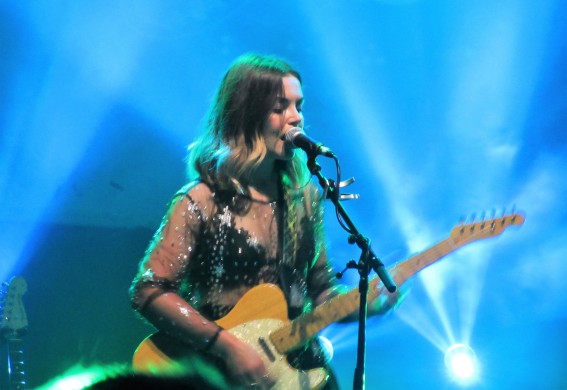 I was even a bit worried that the band might not live up to my expectations, which were so high. After all, they are a fairly young band, and this show at Koko in Camden was their biggest yet. And there are only two of them – Stina (lead vocals and guitar) and Cat Myers (drums and vocals), so some of the electronic embellishments would have to be pre-programmed or left out. No need to worry! They were brilliant and the crowd responded in kind. A great atmosphere in a great venue. Koko is the old Camden Palace and still is a club as well as concert venue. It’s well looked-after, has all the old ornate trimmings – and decent air conditioning, which was good for a warm evening in London.

The band played sixteen songs – see the playlist at the end – with everything from “Babes Never Die”, except closer “Gangs”, and all their best loved songs from the first album, “Honeyblood” (how I missed that when it came out in 2014 mystifies me). They started with “Justine, Misery Queen”, upbeat and poppy, despite the title. That went straight into the rumble of “Choker” from the first album. And great songs just kept on coming! The set was cleverly paced, and showed the band have real confidence in what they are doing, leaving what I would guess are now their two most popular songs, “Ready For The Magic” and “Babes Never Die”, to the encore. And what an upbeat send off that was. Euphoric! 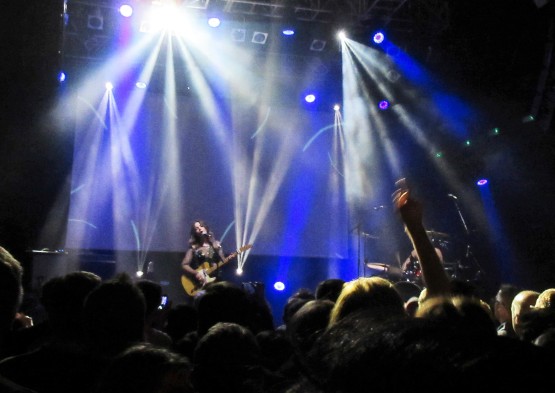 A highlight for me, being a sucker for that celtic soul, was the trio in the middle of the set, the beautifully despairing “Walking at Midnight”, then “Cruel” and “Hey, Stellar”. So glad they played both of them. I was rather worried that at least one of them might not make the cut if the emphasis was on the rock’n’roll. It was nice bit of pacing – a respite of sorts before they cranked up the rock and the chanting with a finale of “All Dragged Up”, “Sea Hearts”, “Super Rat” and “Killer Bangs”. Three of those are from the first album – “Sea Hearts” the exception – and the message there is, if you fall out with Stina, watch out! 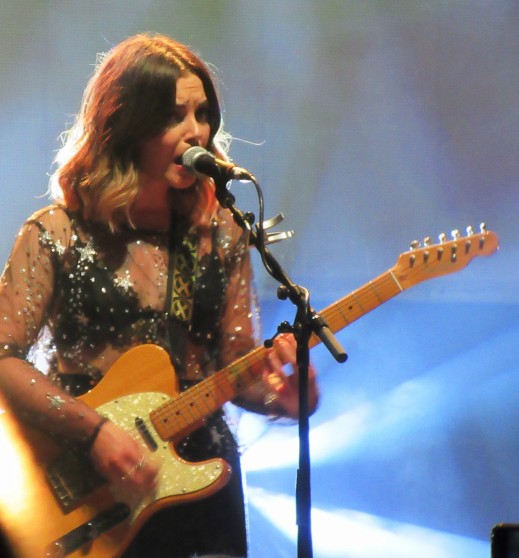 And then that encore. The surf punk of “Ready for the Magic” – the first Honeyblood song I heard, which hooked me right away. And the pure celebration of “Babes Never Die”, towards the end of which Cat left the drums and descended into the crowd, with Stina on the stage, grinning, waiting to finish off the song. A lovely end to the show. Throughout the performance Stina and Cat were declaring how much it meant to them. They were in awe to have got this far, and wow, it must be amazing for any band, especially in their early days, to find so many people responding to the music they’ve put their heart and soul into.

A joyous evening – the essence of rock’n’roll, with a dash of celtic soul. There isn’t much that’s better! Can’t wait to see Honeyblood again at Latitude. The Sunrise Arena is going to be heaving!

Here’s the setlist. Not often I can reel off all the songs played in an evening. Just goes to show how much I’ve been listening to Honeyblood!

Love is a Disease

(I’d Rather be) Anywhere but Here

Ready for the Magic

I'm blogging about the things I love: music, sport, culture, London, with some photos to illustrate aspects of our wonderful city. I’ve written a novel called “The Decision”, a futuristic political thriller, and first of a trilogy. I’m also the author of a book on music since the 1970s called “ I Was There - A Musical Journey” and a volume of poetry about youth, “Growin’ Up - Snapshots/ Fragments”. All available on Amazon and Kindle.
View all posts by John S →
This entry was posted in Music - concerts, lists, reflections and tagged Babes Never Die, Honeyblood, Koko, London, music. Bookmark the permalink.