On Wednesday 21 June a few of us headed down to Hampton Court for a bit of musical nostalgia. Bryan Ferry, once the lead man in Roxy Music, for which we will revere him forever. Set lists from earlier shows suggested that the Roxy catalogue was getting a bit of a revival on the current tour. This could only be a good thing…

And it was a good thing. In fact it was the Main Thing, which just happens to be the song they kicked off with. From Roxy’s 1982 coffee table classic, “Avalon”. The album that people, who would never otherwise have listened to Roxy Music, bought in 1982 and beyond. Smooth, sophisticated, a bit melancholy, but not too depressing. Perfect for the yuppie dinner party. It was a Bryan Ferry album really, as everything from the late 70s onwards was. And it was one of the albums that sums up music in the 1980s. I rather like it, by the way. I was an 80s twenty-something after all.

We took our seats, four rows from the front, with our “free” plastic glass of champagne (80s yuppies, yah?) after a pleasant Lebanese meal in East Molesey, the other side of the river from the palace. Called Mezzet, and on Bridge Street, if you are ever down that way. It’s the manor of my good pal DC, who arranged the evening. And it started well with “The Main Thing” and “Slave to Love” and then just got better and better. Song three was one of my favourite ever Roxy songs – “Ladytron”, from their first album. The spooky synth intro one of their finest moments. The classic “Out of the Blue” followed that. We were in for a good evening. 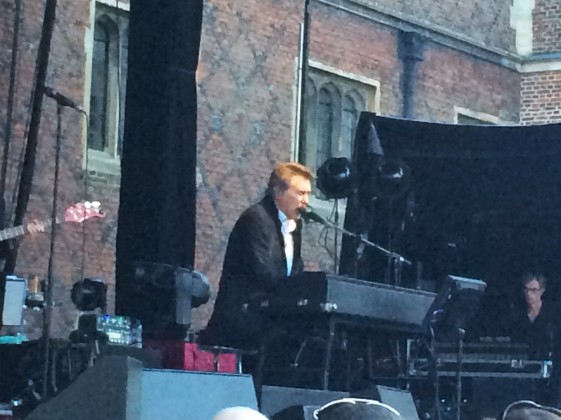 We saw Bryan in this same venue ten years before. At that time he was promoting his album of Dylan covers. Only one song from that got an outing this time: “Simple Twist of Fate”. But we did also get a cover of Neil Young’s “Like a Hurricane”, which gave one of the two excellent guitarists, Chris Spedding (he of “Motorbiking” fame, and session man par excellence, rumoured to have played the riff for the Sex Pistols’ “Anarchy in the UK”) a chance to play his best licks. The other guitarist was Jacob Quistgaard, who did a very good Phil Manzanera impression, adding his own style to the solos and riffs too. His outro to “Ladytron” was awesome. 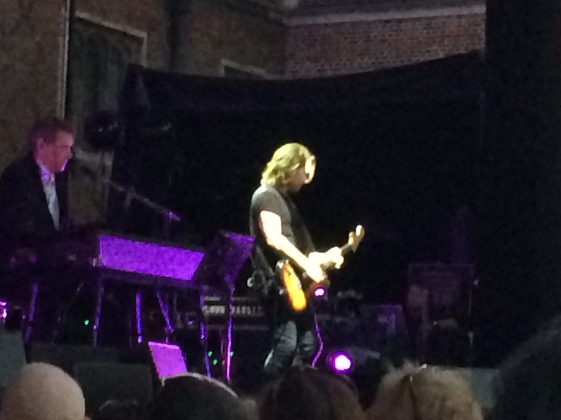 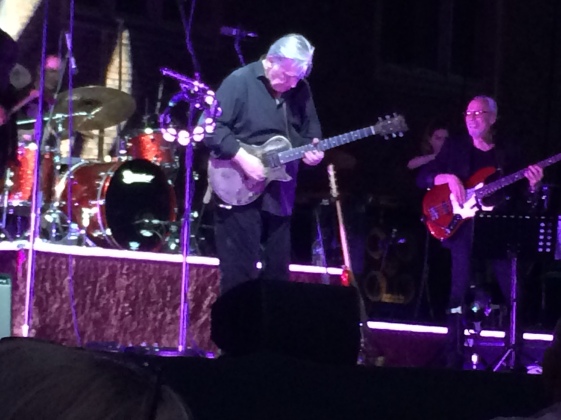 There was an interval of sorts when Bryan went off to change – white shirt to black shirt! – and the band played an instrumental, which showed off their talents. The star was saxophonist Jorja Chalmers, who has been with Bryan’s band for a while. She has a bit of that Roxy Music style – not quite conventional – and played some brilliant sax fills. Quite why she didn’t just stay at the front all the time I don’t know. Maybe Bry didn’t want her stealing the limelight. There was also an excellent violinist, Marina Moore. She stayed firmly in the shadows, but did all the bits that embellished Roxy songs even before Eno left and was replaced by an actual violinist, Eddie Jobson. 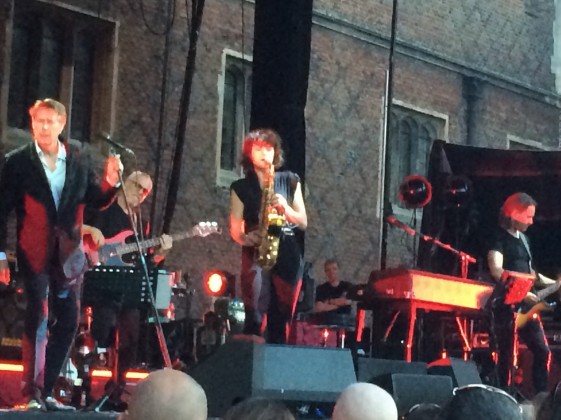 It should be noted also that, even at the tail end of a sweltering London day, with temperatures over 30 degrees, Bryan Ferry did not discard his jacket. Ever stylish, even as he creeps into his seventies. Wow, yes, his seventies, and he puts on a show like Wednesday. I’m in awe, and hope I keep as well when I reach that age – a bit to go yet!

But anyway, after that interval, with Bryan in all black, the show went from good to unbelievable. First, my favourite “Avalon” tune, “Take a Chance with Me”, all melancholy elegance. And then a trio which made any true Roxy fan go home in ecstasy. First and third, songs from the first album, “Re-make, Re-Model” and “If There is Something”, all rock’n’roll weirdness; and in the middle, the greatest song. The lights dimmed, Bryan at the keyboards, semi-lit, shadowy. So appropriate for the song, “In Every Dream Home a Heartache”. The bizarre ode to an inflatable doll. Decadence and sadness, in equal measure. As good a rendition as I’ve ever heard.

That kept us Roxy aficionados happy. Now it was the time for the rest of the audience. Just as we saw when Roxy played at the O2 in 2011 the place truly came alive when the band played the first bars from that coffee table classic album “Avalon”. This time it was “More Than This”, followed by “Avalon” itself. My friend, who calls himself “Dood” when he comments on my blogs, said in an email that it was a Pavlovian reaction from the forty and fifty-somethings. Suddenly all these people launched themselves from their seats, headed for the front and danced! And yeah, it was infectious. The vibe was good. No moshing, of course. Not in Hampton Court Palace. But Mum and Dad dancing par excellence! 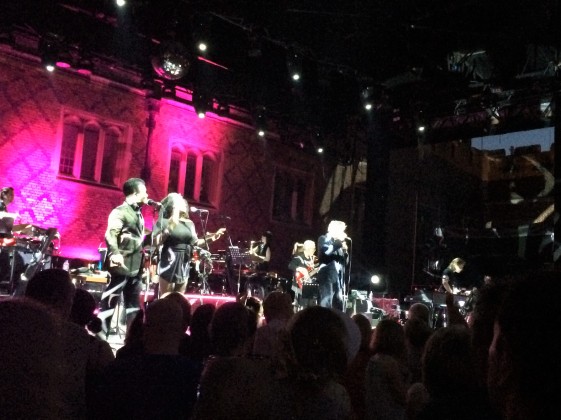 And the hits just continued. Back to the 70s, but recognisable to all. The iconic “Love Is The Drug” – dim the lights, you can guess the rest – the even more iconic first hit “Virginia Plain”, the highly danceable “Let’s Stick Together”, the frantic “Do the Strand” (one of the very greatest Roxy songs, with the immortal line, rhododendron is a nice flower, which DC, Dood and I chanted in unison, to the bemusement of people around us) and then, the final touch, the John Lennon song which Bryan has made his own, “Jealous Guy”. Played almost as a metal classic with the soaring guitar from Jacob. An anthemic end to a brilliant concert, the second half in particular just being a rush of wonderful songs and memories.

I veer around in my musical preferences. As any reader of this blog will know, I love Honeyblood more than anyone else at the moment, and their show last week was awesome. This was a total contrast, but I enjoyed it just as much. Roxy Music are one of the greatest bands in my musical story, and Bryan Ferry and his superb band kept the music of Roxy, and more besides, truly alive tonight.

PS. Didn’t have my trusty digital camera with me, so photos are from my iphone 5S. But they give you an idea, I hope.

I'm blogging about the things I love: music, sport, culture, London, with some photos to illustrate aspects of our wonderful city. I’ve written a novel called “The Decision”, a futuristic political thriller, and first of a trilogy. I’m also the author of a book on music since the 1970s called “ I Was There - A Musical Journey” and a volume of poetry about youth, “Growin’ Up - Snapshots/ Fragments”. All available on Amazon and Kindle.
View all posts by John S →
This entry was posted in Music - concerts, lists, reflections and tagged Bryan Ferry, Hampton Court, London, music, Roxy Music. Bookmark the permalink.