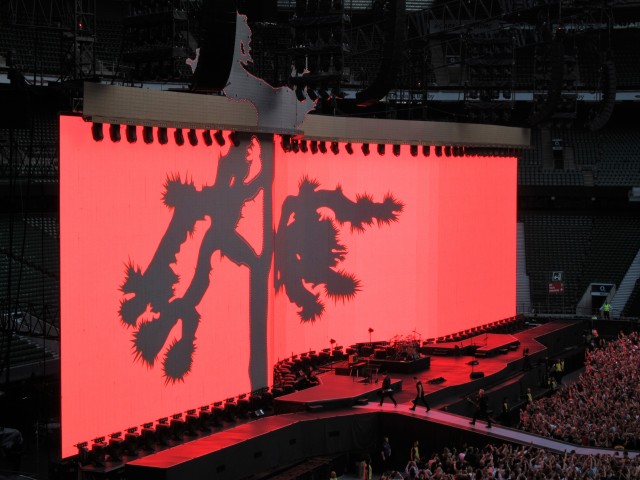 Now, I’m well aware that U2 divide opinion. They’ve been doing so ever since Bono strode out with a white flag in the early 80s to the strains of “Sunday Bloody Sunday”. And especially since Bono took on his role as a spokesman on the big issues the world faces: poverty, war, debt, exploitation, imperialism, hate. And some people just don’t like the music, which has always erred towards the grandiose. But I love the music, especially from the period that spanned “The Unforgettable Fire, “The Joshua Tree”, “Achtung Baby” and “Zooropa”. (I can live without the live album “Rattle and Hum”, though it had its moments.) For me they combined some of the great riffs and anthems with that thing I called celtic soul. Bono called U2, last night, “the loudest folk band in the world”. I get that.

It’s less than 2 years since U2 wowed us at the O2 with a mixture of new songs from “Songs of Innocence” and plenty of old favourites. And the videos and lights were spectacular. But nothing like 2017! The year when U2 returned to their most iconic album and embellished the rest of the set with suite of songs that were pretty much their greatest hits. Backed up by a video screen – and imagery – which was truly breathtaking.

First though, we had Noel Gallagher and his High Flying Birds. And that meant some Oasis classics, as well as the newer songs. It felt a bit odd seeing Noel playing second string to another band: “Champagne Supernova”, “Wonderwall” and “Don’t Look Back in Anger” the aperitifs before the main course. The crowd reacted enthusiastically, especially to “Don’t Look Back in Anger”. Noel didn’t have to do a lot of singing. It has always been an anthem, but it has taken on a new status recently as a way of expressing feelings for the victims of terrorism in Manchester and London,  and of terrible neglect in Grenfell Tower, with such disastrous consequences. In the Saturday show, Noel came out and sang the song with U2 at the end of their set. This time he kept it to himself, but its power was unarguable.

And so to U2. Just before 8.30. The light fading but still fairly bright, on what had been a beautiful day.   Drummer Larry came on first and headed for the extended stage, shaped like a Joshua tree. He struck up the drums as Edge, then Bono, then Adam made their way to the island in the crowd. And then “Sunday Bloody Sunday”. No white flag anymore, but a thunderous celebration, with Edge’s guitar crunching harder than on the record. And then that moved into “New Year’s Day”. Oh my God! My favourite U2 song, to this day. Never fails to stir something in me. A song that helped get me through 1983 after a love that went wrong. A punch-the-air song of hope and defiance:

I, I will begin again!

It didn’t stop there. Two more songs out on the Joshua tree. Two more I would have picked myself. “Bad” and “Pride”, both from the “Unforgettable Fire”. “Bad”, the song that turned U2 into global superstars after Bono pulled a girl from the audience at Live Aid  and danced with her in front of millions. “Pride” the song that got bounced off the set because “Bad” went on too long. “Pride”, an ode to Martin Luther King, which also has the best chiming Edge riff of all. An inspiration always, for me, even if the great comedian, Bill Bailey, also a talented musician, can mock how easy it is to play. Well, I say, no-one ever did it like the Edge, before the Edge.

So, after that fantastic four, the band returned to the main stage and took a bow, while the amazing screen came on. Unlit, it almost looked like cardboard, with a Joshua tree shaded on part of it. Lit, well check some of the photos for a hint of the wonders. It’s fair to say the screen was a fifth member of the band this night.

And a run through “The Joshua Tree” began. The album loaded its big hitters up front, and so, after the fab four starters for the show, we had “Where the Streets Have no Name”, “I Still Haven’t Found What I’m Looking For”, “With or Without You” and “Bullet the Blue Sky”. What can I say? It was pretty overwhelming. Not just the music, but the video images too. The big spaces and landscapes of the USA, the roads, the desert, the Joshua trees. The country U2 had a love-hate relationship with at that time. They were in awe of it, and the music of America, but also railed against the imperial war that still raged in Central and South America. “Bullet the Blue Sky ” with its incandescent guitars and brutal drums and bass, is the song that expresses that angst and anger. It has a twin on the album, the lesser-known “Exit”, which is the second last song, before the heart-wrenching “Mothers of the Disappeared”. For those who remember vinyl LPs, “The Joshua Tree” was a bit of an album of two halves. Side one was the monster. Side two was relatively subdued, and I’ll admit that I never paid it quite so much attention. But last night, U2 made it a revelation, adding power, and of course aided by the wonderful imagery. And, as just two examples, “Exit” had a frenzy about it, as Bono did a dervish dance in a cowboy hat, and Edge sliced through the riffs; while “Mothers” brought out the mobile phones for the first (but not last) time, to create a sea of stars, as Bono lamented the fate of the disappeared in South America and elsewhere, against an unchanging backdrop of women, mothers, holding candles aloft.

You know, there was so much to take in from this show. I’m still processing it.

The band went off briefly, and returned for an anthem and then a bit of rock’n’roll, U2 style. To my great delight we started with “Miss Sarajevo”, a wonderful song off the “Passengers” collaboration with Eno. A tribute to how people keep things normal in times of war. Transposed to the plight of Syrian refugees in Jordan. A big flag passed around the lower tier of the stadium to that effect. Then that rock’n’roll. Three songs with big riffs and kaleidoscopic backdrops: “Beautiful Day”, “Elevation” and “Vertigo”. It was noticeable around where we were sitting, which was quite expensive, as I’d pressed “best price” on Ticketmaster while loads of tickets were left, that these songs got the best reaction of the night. That tells me I was ten years older than a lot of the crowd in my area, and a bit less inclined to to the obvious favourites. And when people pushed by, going for beers during “Bullet the Blue Sky”, I did wonder why they’d come to the concert. But y’know, we all have our different U2s, just like we do our Bruces and Radioheads.

Then, finally, three from “Achtung Baby”, the album which, for me, rivals “Joshua Tree” as U2’s best. “Mysterious Ways” with its electro-funk beat, Bono’s vehicle for getting a woman out of the crowd to dance with him. And have her five minutes of fame, as the screen captured her image in multi-colours. Whatever you think of Bono choosing someone 30 years younger and getting out the video camera, it was a spectacle, and the fan had a night to remember, hugging the band members and being on that screen. Unreal.

Then it was “Ultraviolet” with its baby, baby, light my way refrain, as the screen showed the faces and names of great women from the last hundred years and more. Old and new. A genuine tribute – easily mocked, by cynics, I’m sure – and a powerful reminder that if the world was run by women we would be in a much better place. Probably… funny things happen to people when they take control. Male and female.

And last, inevitably, “One”. The phones out again. Communion. It’s an interesting song. Study the lyrics and you’ll see it’s that we are one, but not the same. It’s a song about a troubled relationship. But it has become a song about unity – in love. The title, the feel, has risen above the original intent. The togetherness has overcome the sadness. The celtic soul remains.

A wonderful end to an extraordinary concert, one of the best I have ever seen. So much to absorb – like I said earlier, I’m still processing, reflecting. While listening to U2 of course!

This was a return to the greatest album and the greatest hits, but it wasn’t an easy option, a tired rendition. This was a band as restless and innovative as ever. Taking time, this time, to celebrate the music they know their fans love most. But shaking it up, toughening it up, and using the sound and the vision to create an experience that may have surpassed anything they have done before.

It’s no coincidence that Bono took time to pay tribute to Brian Eno, the great innovator and sage, who was with U2 at the height of their journey, their achievement. Tonight’s magnificent display was testimony to his influence – to this day.

Just awesome. Here are the photos. 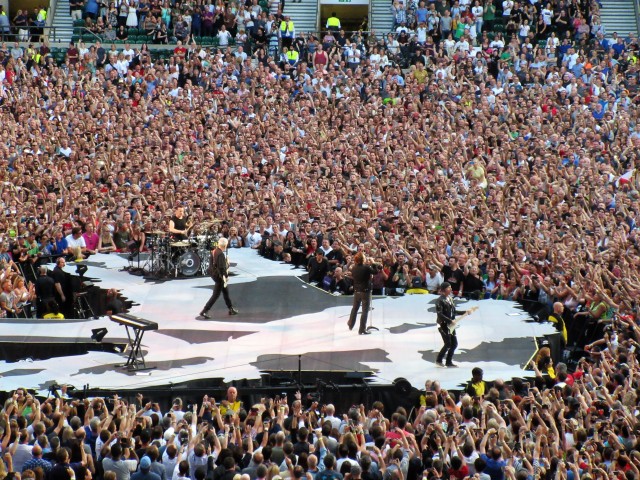 Where the Streets Have no Name.

With or Without You. 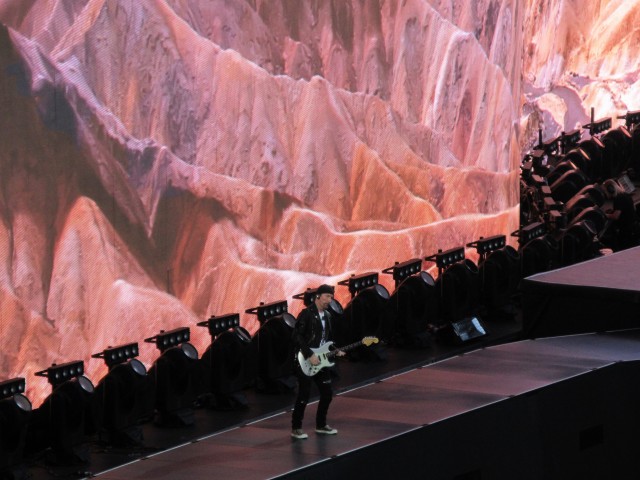 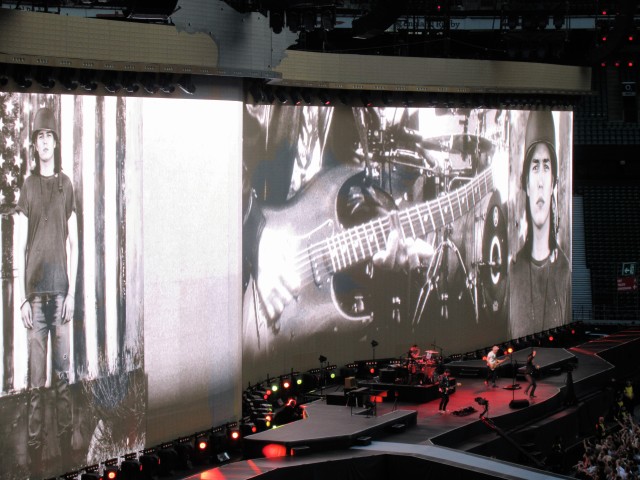 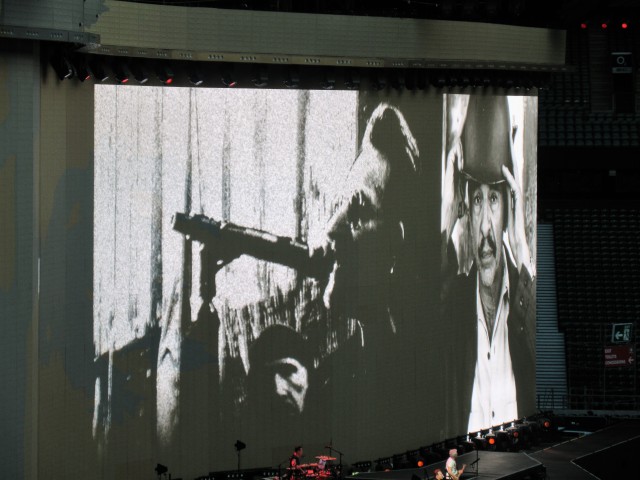 Mothers of the Disappeared. 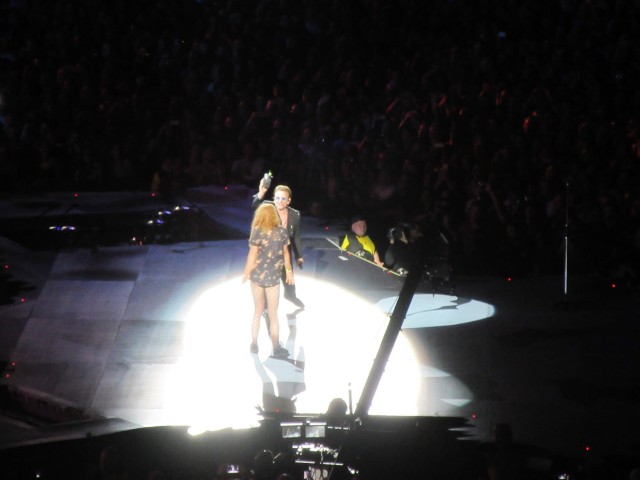 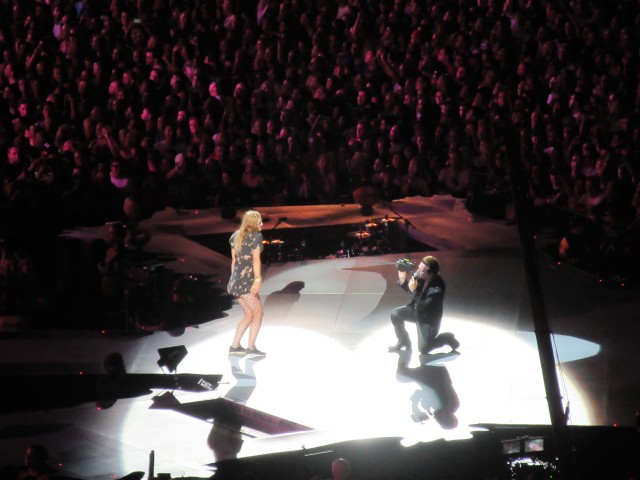 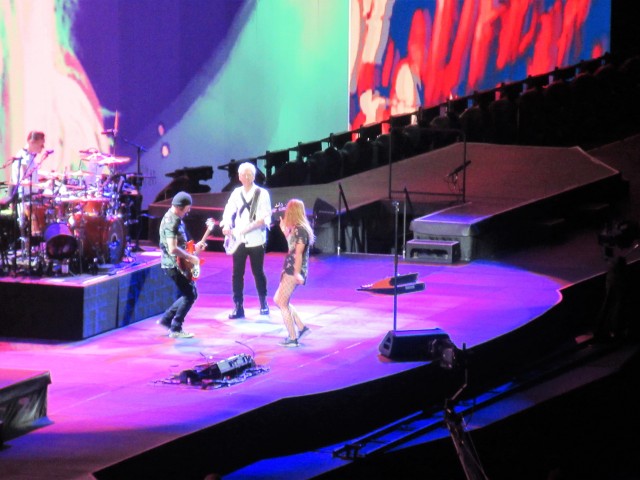 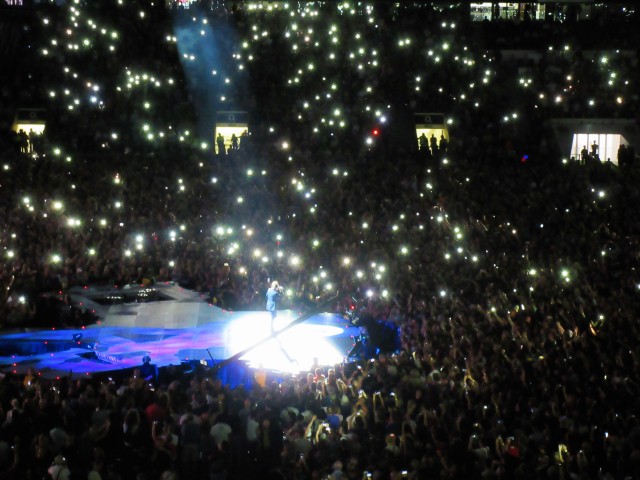 I'm blogging about the things I love: music, sport, culture, London, with some photos to illustrate aspects of our wonderful city. I’ve written a novel called “The Decision”, a futuristic political thriller, and first of a trilogy. I’m also the author of a book on music since the 1970s called “ I Was There - A Musical Journey” and a volume of poetry about youth, “Growin’ Up - Snapshots/ Fragments”. All available on Amazon and Kindle.
View all posts by John S →
This entry was posted in Music - concerts, lists, reflections and tagged concerts, London, music, Noel Gallagher, Twickenham, U2. Bookmark the permalink.