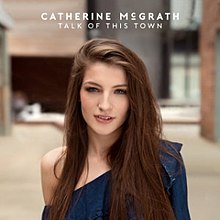 Catherine McGrath is a 20 year old country singer from Northern Ireland. She has recently released her debut album “Talk of this Town”. Regular readers of this blog will have seen all the reviews I have written about her concerts over the last year or so. I first saw her on the Alcove Stage at Latitude in 2017. I immediately liked her songs. Great melodies and sung beautifully. She had a really engaging stage presence too. I combined a couple of her EPs to get her into my top ten albums of 2017. And now we have the album.

And it’s a wonderful album. Of course it is! Country doesn’t really describe it. It may be the inspiration, but it is a consummate pop album. And yes, the template is undoubtedly early Taylor Swift.  It’s not a copy, but unquestionably an influence. My impression is that some people in the music business have seen Catherine’s potential and are giving her a bit of backing. She’s getting featured on BBC Radio 2, the production on the album is slick and pop-orientated. It has made the Top 20.

The album is a mixture of old (comparatively speaking) and new. Two of the best tunes have been recent singles. “Talk of this Town” is all about breaking free from the doubters at home and making her way in London. “Wild” has been around since that Latitude show and is a classic frustrated love song: we’re less than lovers and more than friends, and it’s killing me.  All happening at a Coldplay concert – based on a real life experience I think. And with a great bridge two thirds of the way in. Anthemic.

A few of the tracks are re-worked versions of songs from her previous EPs. “Just in Case”, “Cinderella” and “She’ll Never Love You”. Most of Catherine’s songs are wistful tales of love: lost or possible, rather than actual. Well, it is country music at heart! “Cinderella” has always been one of my favourites – a really beautiful tune – “Just in Case” has an upbeat sound and is often the concert opener, and the version of “She’ll Never Love You” has been stripped down to a piano version, with just a few strings. The last song. Truly lovely.

There are some infectious new songs too, with a bit of upbeat guitar; “Lost in the Middle” and “Enough for You” stand out for me at this point. These are the real Taylor Swift songs. But it’s all good. The subject matter, in classic country fashion, might be a bit miserable; but actually it is a truly uplifting pop album. It will be in my top five of the year, no doubt, battling it out with Kacey Musgraves, Lindi Ortega, Chvrches and Gengahr.

Give it a listen.  And then you can say, I knew her before she was massive.

I'm blogging about the things I love: music, sport, culture, London, with some photos to illustrate aspects of our wonderful city. I’ve written a novel called “The Decision”, a futuristic political thriller, and first of a trilogy. I’m also the author of a book on music since the 1970s called “ I Was There - A Musical Journey” and a volume of poetry about youth, “Growin’ Up - Snapshots/ Fragments”. All available on Amazon and Kindle.
View all posts by John S →
This entry was posted in Music - Have You Heard? and tagged Catherine McGrath, music, Talk of this Town. Bookmark the permalink.

4 Responses to Have You Heard? – (88) “Talk of this Town” by Catherine McGrath