Amber Arcades are a Dutch band, and the vehicle for singer and guitarist Annelotte de Graaf, an ex-civil servant. I can relate to that! I first came across them at the End of the Road festival in 2016, when I found their jangling Euro-melodies quite captivating. I even likened them to Velvet Underground and My Bloody Valentine, although later, I realised that Canadian band Alvvays were a closer comparison. These are all very good recommendations, and I loved their debut album “Fading Lines” so much that I made it my top album of 2016, pipping long time front runner “A Moon Shaped Pool” by the mighty Radiohead. It was the honest choice – I’d played Amber Arcades’ album incessantly after discovering it.

Since then I’ve seen the band three times: twice in Hackney, at the Moth Club and Oslo, and also at the Roundhouse, supporting Grandaddy. Always good, though perhaps a little nervous in the support slot at the time. Time moves on and the second album, “European Heartbreak” has just come out. It’s a mellower work than the first album; less guitar orientated. Maybe even more European. By which I mean lovely, tuneful, slightly melancholy melodies. Part of the album is genuinely a lament for Europe, and what looks like its gradual demise as a political entity, with the perfidious Brexiters leading the way. The song “Goodnight Europe” reflects this, without being too explicit.

I was listening to the album on repeat this week, ahead of the concert at the Dome in Tufnell Park, trying to familiarise myself. Early favourites were “Hardly Knew” and “Oh My Love (What Have We Done?) which had a First Aid Kit vibe. “Where Did You Go?” had the best guitar; while how can you resist a song called “Self-Portrait in a Car at Night”?

So I was hopeful I’d recognise most of the songs. And the preparation paid off, because the main set at the Dome was predominantly from the new album. In fact, the only song from “Fading Lines” was “Right Now”, the second tune played.  Annelotte and the band, who I think were all new except for the lead guitarist, played with a confidence and swagger which was a step up from the previous shows – the product of a couple of years on the road and the benefit of a fine new album. Annelotte, resplendent in the baggy gold outfit which she wears on the album cover, relinquished her guitar from time to time, just to sing… and dance. She had more guitars too. The keyboard player also embellished the sound with a bit of trumpet – that French jazzy sound.

The Dome – a nice, medium-sized venue – was pretty full, though it was good to have a little space to manoeuvre. There was a really positive atmosphere – people were loving the music and the band were enjoying playing it. The bass player in particular was really giving it some. At one point he jumped into the crowd, though there was no mosh pit for him to surf on! Maybe one day.

Last song of the main set was the rousing “It Changes”, a jangling bit of Americana (with a strong REM feel) which was released in between the two albums, and surprisingly didn’t find its way onto the new album. Or maybe not surprising – it would have been an outlier in terms of sound and feel. The band then came back for four more songs, which, I’m glad to say, included two of my shimmering guitar favourites from the first album, title track “Fading Lines” and the album opener “Come With Me”. The show ended with “Baby, Eternity”, which starts mellow, but allows the guitars to let rip. Live, that was the moment for a bit of a wigout. The spirit of Velvet Underground remains!

Who knows how far Amber Arcades and Annelotte de Graaf will go. “European Heartbreak” has been getting four star reviews in the British press, which is encouraging. Fingers crossed it’s just the start. A wonderful band, and one I will go to see at every opportunity, for sure. 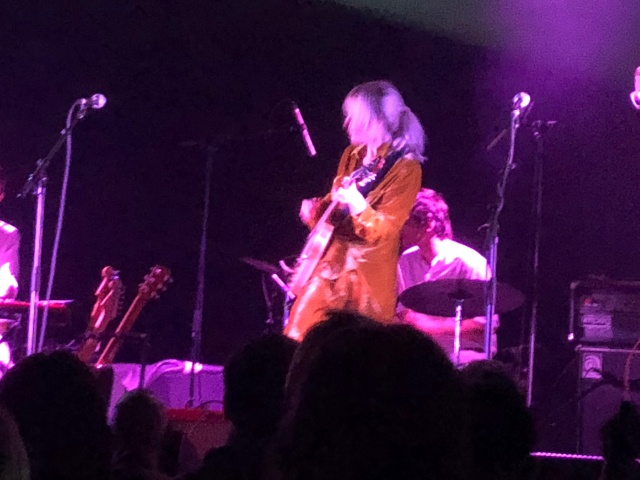 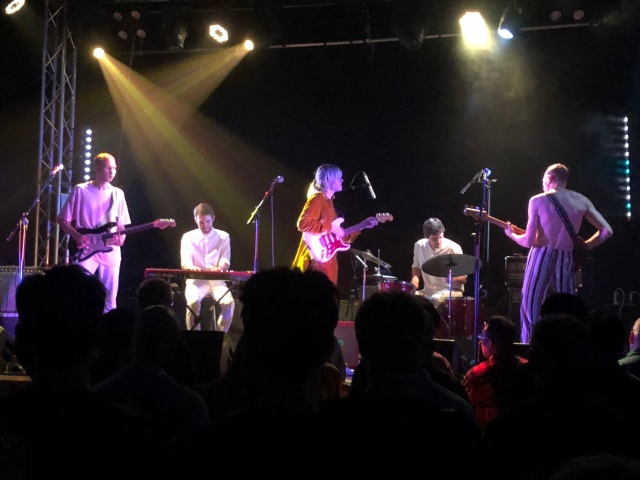 I'm blogging about the things I love: music, sport, culture, London, with some photos to illustrate aspects of our wonderful city. I’ve written a novel called “The Decision”, a futuristic political thriller, and first of a trilogy. I’m also the author of a book on music since the 1970s called “ I Was There - A Musical Journey” and a volume of poetry about youth, “Growin’ Up - Snapshots/ Fragments”. All available on Amazon and Kindle.
View all posts by John S →
This entry was posted in Music - concerts, lists, reflections and tagged Amber Arcades, Annelotte de Graaf, concerts, Dome Tufnell Park, London, music. Bookmark the permalink.