Now this is what you call the dream ticket! Soccer Mommy, featuring Sophie Allison, are one of the best new bands around, with a great full debut album, “Clean”, which will be in the high reaches of my top ten for 2018. And then Kacey Musgraves: well, what can I say? With Lindi Ortega, my favourite country singer, and responsible for one of the best albums of this year, and many others:  “Golden Hour”. An album that I have played more than any other in 2018, one that means a lot to me. With four songs – “Slow Burn”, “Oh What a World”, “Happy and Sad” and “Golden Hour” – that have become something of a soundtrack to my life and the decisions I have taken in 2018. So, yeah, you could say I was looking forward to this night!

The concert was held in the cavernous Wembley Arena – not my favourite venue by any means, but big enough to house all the people who wanted to attend. It wasn’t quite a sell-out, but it was pretty full. Somehow, despite buying the tickets months ago, I contrived to get two seats in the second back row! The upside was that it wasn’t full there, so Kath and I had room to find the best view. The sound was good and Kacey Musgraves’ stage show was beautifully lit, with large screens to enhance the viewing experience. And it was unusually easy to get a beer, so what was not to like?

I’ve seen Soccer Mommy twice this year: first at a packed Moth Club in Hackney in March and then in an equally brimming Tipi Tent at End of the Road in September. The band is the vehicle of Sophie Allison, who sings about love, anguish, anger – life basically. The sound is indie/Americana, with added sensitivity and some beautiful melodies.  A sound I like: Faye Webster, Snail Mail, Sharon van Etten amongst others sing and play in a similar vein. Amber Arcades aren’t too far removed either. Wembley Arena was quite a step up in size for Soccer Mommy, but there was a decent sized crowd, and a few people who were familiar with their music. She joked about the “two or three” who were. The set was mostly from “Clean” unsurprisingly, including what are almost old favourites now:  “Your Dog” (a real put down of men who expect subservience), “Cool” and ”Last Girl”. They opened, as usual, with “Henry”, a tuneful mid-tempo piece. And, in what was an eight song set, Sophie went solo for two songs near the end. One was the lovely “Still Clean”; the other her cover of Bruce Springsteen’s “I’m on Fire”. A lot of artists have covered this song – there’s a real pent-up passion, frustrated desire in there. Sophie strips the song right down and lends it a restrained beauty. It was quite a brave song to sing in the big arena, to an audience who would know the original but not her version. But it worked wonderfully – a moving movement. The first of many! The set finished with a band version of “Scorpio Rising”, another song that Sophie sang solo at End of the Road. She talked a lot more than usual too, introducing most of the songs. A good move, acknowledging that many people wouldn’t know much about her. A great start to the evening.

And then Kacey… oh my God! At the top of the stairs, swathed in beams of light, acoustic guitar, the first bars of “Slow Burn” starting up. Did I have a tear in my eye – of course I bloody did! Such a wonderful song. I’m alright with a slow burn, taking my time, let the world turn… apparently she wrote the song under the influence of LSD, which may explain the line we can take a walk and look at all the flowers. So the show started on a high and just stayed there all night.

The set was a generous hour and three-quarters. Every song from “Golden Hour” got an airing. To hear them all live, with a very slick band, and fantastic lighting and effects was a wonderful experience. Perhaps my favourite song of all, “Oh What a World”, lost the rather unnecessary vocoder effects and was stripped back to its country essence. A song about wonder, happiness in love. How could it not be truly moving? Because I became rather attached to those four songs I mentioned earlier, there have been times when I neglected the rest of the album. But it is all a treat – Kacey’s move into a more pop-orientated sound for sure, but so many beautiful, touching melodies – and sentiments. After “Slow Burn”, for example, we had “Wonder Woman”, “Butterflies” and “Lonely Weekend” in succession. The crowd all stood up and never sat down again. It was a celebration. By “Merry-go-Round”, one of the great songs from her debut album “Same Trailer Different Park”, Kacey let the crowd sing a verse on their own. And from the tone you could tell that most of the voices were female. 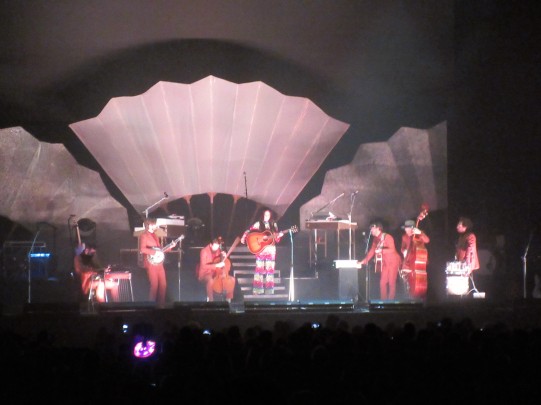 Kacey seemed genuinely humbled by having such a large audience – this is her first arena-scale headlining tour. Like Taylor Swift before her this year, she naturally had things to say about the mad world in which we live at the moment. And of course love was the answer: cue “Love is a Wild Thing” with colourful natural scenery as a backdrop. Before “Happy and Sad”, she talked about that melancholy you can feel when you’re having the time of your life, because you know it won’t last. To which the answer can only be, enjoy the moment, carpe diem. Easier said than done sometimes. Her short tribute, “Mother”, sung alone in darkness, was very touching too. Especially when that segued into “Oh What a World”! 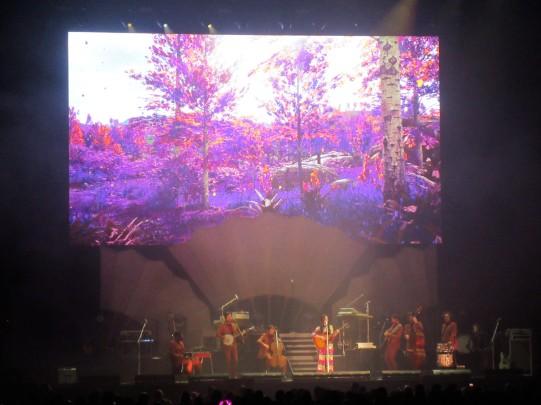 There were a couple of guest appearances. First, during the main set, was from Tom Chaplin of Keane. Kacey is a big fan of their music. They sang a song from Keane’s first album called “Somewhere Only We Know” (the song, not the album). I’d rather forgotten about Keane, though I do own the album. There was a lot of hype around them at the time. The second guest was Sophie Allison, which was nice. She came on during the encore for a cover version of “Tearing Up My Heart” by NSYNC. (I only know this thanks to Setlist FM!). They made a bit of a contrast those two: Sophie in her stoner girl gear, Kacey in her spangled red, white, yellow and blue outfit – a sort of American flag without the stars? But they are two of the same heart, singing about the same things. 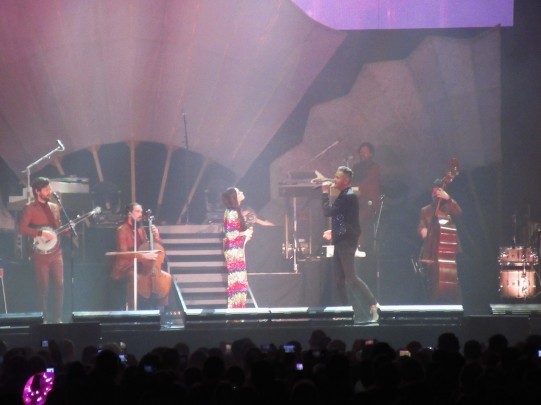 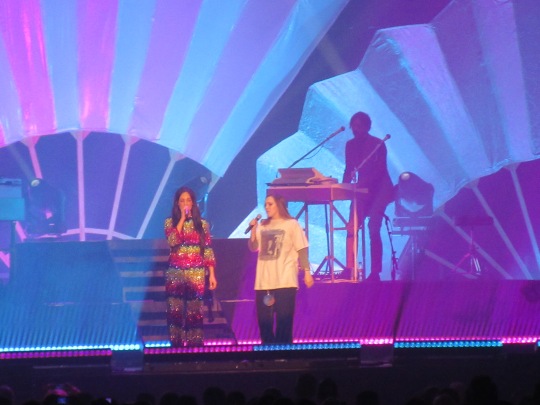 The run-in at the end of the main set featured a dance-along “Velvet Elvis”, the aforementioned “Happy and Sad”, a suitably cosmic “Space Cowboy” and finally, the song that probably made her name, “Follow Your Arrow”. The video showed a bit of Kacey from that time, in her cut-off jeans and white cowboy boots (see the cover of “Same Trailer Different Park”). That song established her as a country singer who was not going to fall in line with the Nashville norms for women. Country in sound, but not in mind. Of course she is now venturing further from the country sound too. Following the Taylor Swift template to a degree, though I can’t really see Kacey going quite as wholeheartedly into dance/R&B. “High Horse” is her biggest step in that direction, and appropriately that was the last song of the show. That sent everyone away in upbeat mode. There was a lovely version of “Rainbow” to start the encore too – Kacey’s plea for tolerance and respect for all. A fitting finale for a show that was full of love and joy. 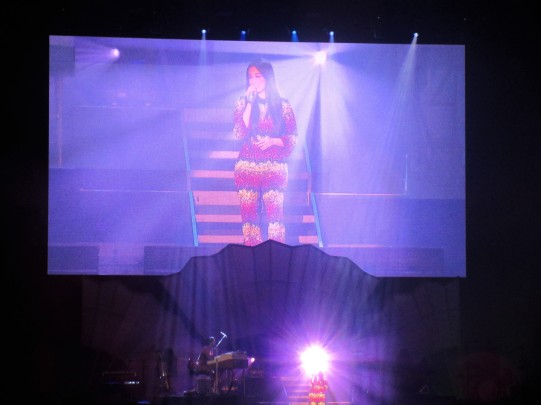 I’ve been fortunate to see many great shows this year, some big, some small. I love them all. But Kacey Musgraves was up there with the very best. With able assistance from Sophie Allison and Soccer Mommy. A wonderful evening.

A few more photos from Kacey’s show below. 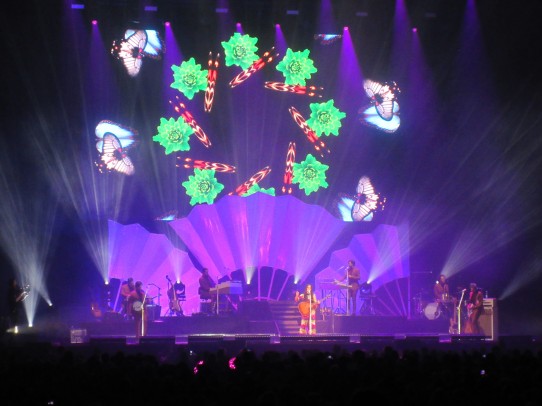 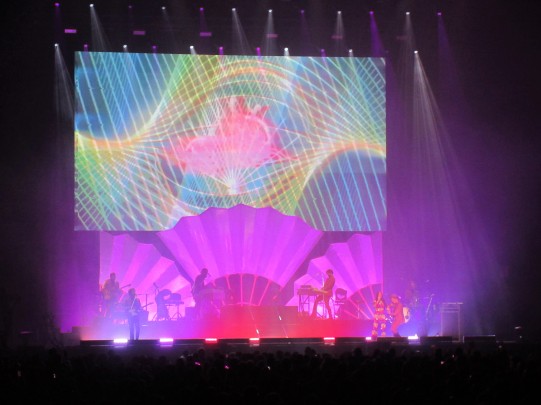 I'm blogging about the things I love: music, sport, culture, London, with some photos to illustrate aspects of our wonderful city. I’ve written a novel called “The Decision”, a futuristic political thriller, and first of a trilogy. I’m also the author of a book on music since the 1970s called “ I Was There - A Musical Journey” and a volume of poetry about youth, “Growin’ Up - Snapshots/ Fragments”. All available on Amazon and Kindle.
View all posts by John S →
This entry was posted in Music - concerts, lists, reflections and tagged concerts, Kacey Musgraves, music, Soccer Mommy, Sophie Allison, Wembley Arena. Bookmark the permalink.