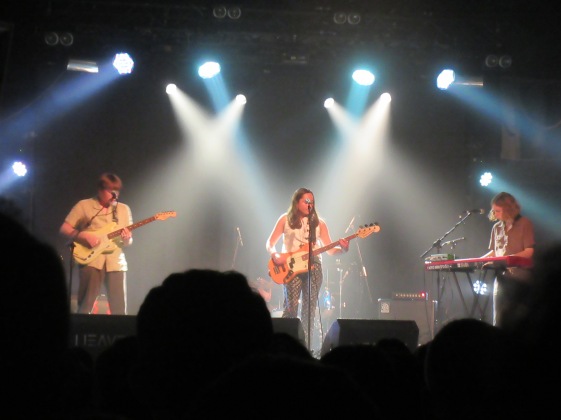 The Orielles are a young band from Halifax, who have been getting increasingly good reviews, both on account of their excellent live shows and a very good debut album, “Silver Dollar Moment”, which was released in February this year. I’ve seen them a couple of times this year, at Latitude and End of the Road. They feature, on bass and vocals, Esme Dee Hand-Halford; and on guitar Henry Carlyle Wade. Their trademark sound involves jangling, echoey guitar, a dose of diamond-edged funk, punchy basslines and Esme’s wafting vocals. If it reminds me of anything it is mid-80s indie – Orange Juice and the Pastels spring to mind. But actually, they don’t really sound like anyone else – they have something which is very much their own.

Last Thursday they played a showcase London show at Heaven, which, I have to say, is an excellent venue for concerts. Holds a decent number of people, has an airy feel to it, and just a good vibe. Given that the two shows I’ve seen here – Girl Ray and the Orielles – attract a benign crowd not dominated by rowdy blokes, that obviously helps.

And this was the best I’ve seen the band perform so far. Full of confidence, really enjoying themselves, the music tight and at times, very funky, in a 70s Isley Brothers way – remember those guitar workouts they used to have at the end of songs like “Summer Breeze” and “That Lady”? Esme and Henry make a contrast centre stage. She stands slightly side on, swaying to the beats as she sings, while Henry at times does an impression of Wilko Johnson on steroids, with his guitar held high on his chest, a bit like John Dwyer of The Oh Sees. And his guitar is something to marvel at – when he gets going with the choppy riffs, the woozy solos, the funk workouts, he really gets going. The highlight in this respect is the closing song of the encore, the epic “Sugar Tastes Like Salt”. A magnificent tune and an uplifting finish to the show. The Orielles’ “Freebird”! 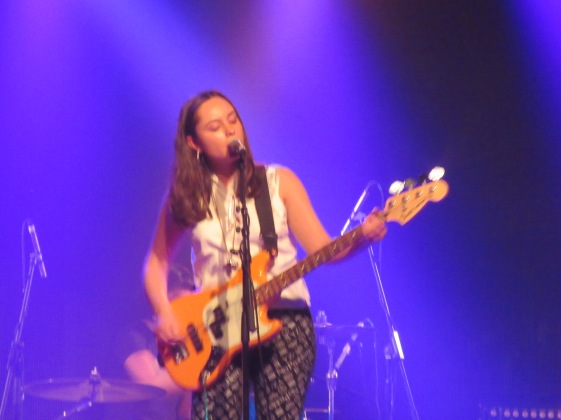 The set covered most of the album, kicking off with “Old Stuff, New Glass”, with a twangy bassline and a triumphant swirling riff. The star tune “Let Your Dogtooth Grow”, with its classic dreamy melody and jangling indie guitar appeared four songs in. That was followed by the bluesy slow one, “Liminal” and its companion “The Sound of Liminal Spaces” where the keyboard player came into his own, with a lovely 60s movie groove. Those two songs show that this band could go anywhere in the future, which was confirmed by the next song, a new one called “Bobbi’s 2nd World”, which is their 70s funkiest yet. It may have been about someone’s cat!

And you couldn’t complain about the last two of the main set, “Sunflower Seeds” and “Blue Suitcase (Disco Wrist)”. Orielles high points. Both with those distinctive stop-start beats and riffs. Truly infectious. The encore started with a new one, “Flowers” (thanks Setlist FM!) and then that epic which I mentioned earlier, “Sugar Tastes Like Salt”.

And that was it. 10 o’clock, and Heaven ready to change back into a club. But what a good evening. Unquestionably one of the best new bands around. And they have the potential to get better and better. Watch out for the Orielles!

I'm blogging about the things I love: music, sport, culture, London, with some photos to illustrate aspects of our wonderful city. I’ve written a novel called “The Decision”, a futuristic political thriller, and first of a trilogy. I’m also the author of a book on music since the 1970s called “ I Was There - A Musical Journey” and a volume of poetry about youth, “Growin’ Up - Snapshots/ Fragments”. All available on Amazon and Kindle.
View all posts by John S →
This entry was posted in Music - concerts, lists, reflections and tagged concerts, Heaven Charing Cross, music, The Orielles. Bookmark the permalink.