2018 – what a year!. Politically it has been turbulent around the world, and in the UK our politicians appear either to have lost their minds or their nerve, as we head towards a break with the European Union which will yield no benefits whatsoever, just deep division and self-inflicted damage to our economy, our society, our nation and our influence in the world. Personally, it’s been a time of change, especially with my decision to retire, which I did in September. And boy, have I enjoyed being freed from the shackles of commuting, dealing with moaning MPs and spending hours in meetings that no-one wanted to be at! More positively, I’ve been doing lots of writing, reading, a bit of painting, plenty of cycling and walking, visiting galleries – and seeing friends. And, of course, enjoying a huge amount of music: on the radio – 6 Music, I salute you! – on Spotify and my iPod, and live. Oh yes, live! I think this is probably my record year for concert-going. In a spot of statto-nerdism, I went through my diary and blogs the other day and counted 44 concerts, plus three festivals: the one-dayer at All Points East in Hackney back in June, and then the two fixed points in the year  – Latitude in July and End of the Road in August/September. Those last two events added another 50-plus shows to the list! A lot of music, and a lot of wonderful experiences and precious memories.

It’s been a great year for recorded music, too. I say that every year, but there is so much creativity, so much variety, innovation, excitement. Plenty of tried-and-trusted experiences too – nothing wrong with taking comfort from the familiar, something to rely on, retreat to, in this mad world. I published my Top Ten of 2018 a couple of weeks ago, and mentioned another ten albums and a few tracks, just for good measure; but since then I’ve been listening to a lot of music that I’ve heard in 6 Music round-ups or read about in the best-of lists in the media. It’s mind-boggling! There is so much good stuff out there that I hadn’t heard – or even heard of. That’s despite spending a fair amount of my life listening to and seeking out new music. One of my favourite DJs on 6 Music is Lauren Laverne. She has been on between 10am and 1pm for many years, although she is about to take over the breakfast show. The timeslot has meant that I didn’t get to hear her that often, although you can listen to anything on delay these days, and she also does a very good “Recommends” hour one midnight each week. I’ve been listening a lot more since I retired, and just before Christmas I caught her round-up of her favourite tunes of the year. It was brilliant! A fair few tunes made their way immediately onto my Best of 2018 playlist on Spotify, including “Boys” by Lizzo, “Charcoal Baby” by Blood Orange, “Boyfriend” by Confidence Man and “Girlfriend” by Christine and the Queens. None of these are obscurities, but I was only just hearing them. “Tints” by Anderson.Paak (ft Kendrick Lamar) and “Offence” by Little Simz were already on the list, courtesy of earlier shows.  I’m getting my dance music bug back, after the dominance of indie and country in recent years. Back to the 90s!

But let’s not get carried away. Indie and country remained my staples, especially in the live environment, and on my endlessly listened-to playlists which accompanied a lot of my writing and even more of my tube journeys. My top albums were both by country artists – Kacey Musgraves and Catherine McGrath – although both were basically just very good pop albums. With, for me, some very moving and resonant songs. I was really pleased to see the recognition that Kacey has received for “Golden Hour”. And in the way of these things, a media bandwagon develops and suddenly the album is getting in everyone’s Best-of lists. So much so that in the recent BBC poll of 35 music polls, “Golden Hour” came top. Well-deserved; and I hope similar recognition will, in time, come Catherine’s way. Her debut album, “Talk of this Town” didn’t make any Best-ofs I’ve seen (though I’m sure it would have featured in some UK country lists) but she has made a great start to her career and is a joy live. I saw her three times this year, each show a sell-out and each a step up from the previous one. The last was at the Scala, Kings Cross, in September, part of her tour to promote “Talk of this Town”. It was a couple of days after my retirement, so I guess it will stay in my memory for that reason too! 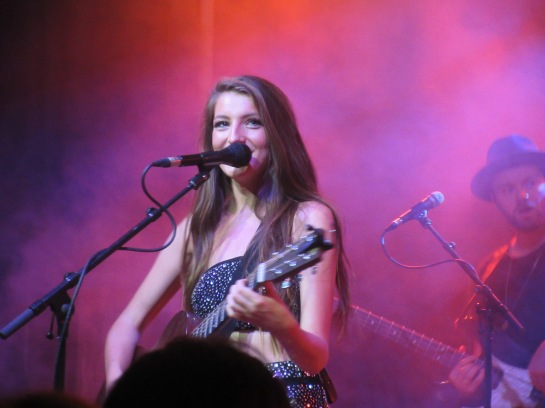 Catherine McGrath at the Scala, September

Kacey’s show at Wembley Arena in October was one of the highlights of my musical year.  A really wonderful, moving experience. I’d put that show in my top three of the year. It’s hard to pick three from so many; but without taking time to analyse it, or go through the list and start to revise the choice, there were three that jumped out. The other two were Taylor Swift at Wembley Stadium, who really was amazing; and, of course Bruce Springsteen’s solo show on Broadway. I had the good fortune, thanks to my friend and colleague at IPSA, Matthew, to get a face value ticket for the show on 30 June. Face value was bloody expensive! But it was a once-in-a-lifetime experience, an extraordinarily powerful mix of the spoken word and Bruce on acoustic guitar and piano. His wife, Patti Scialfa, joined him for two songs, but otherwise it was just Bruce and his story. While I was watching, I’m not sure I took it all in. It was afterwards, walking the streets of New York, that I started to process it, to remember key moments, to reflect on what it meant to me. I’ve written before on how Bruce’s music, from when I first heard “Darkness on the Edge of Town” at the age of 19, became a soundtrack to my life – a bit less so these days, but a lot so in my 20s and 30s especially.

A recording of “Bruce on Broadway” is now on Netflix. I’ve watched it once; in the New Year a few of my old friends are coming round for a Bruce and beer-fest. Back to 1978 all over again!

In the here and now, Latitude and End of the Road (EOTR) were, once again, highlights of the year. Crucial moments. Moments of liberation, discovery, celebration, community, conversation and Carlsberg! Lots. And this year sun, sun, sun, both festivals. Which at Latitude, means dust, dust, dust! As ever, the music was fantastic and provided a template for music-listening for much of the rest of the year. Highlights for me at Latitude included: Palace Winter, Lower Slaughter (so angry!), Durand Jones and the Indications, Black Midi, Alvvays, Mogwai, Holly Cook, the Orielles, Idles, Wolf Alice and Jon Hopkins. At EOTR my pick were: Tiny Ruins, Amyl and the Sniffers, This is the Kit, Fat White Family, Shame, the Orielles again, Caroline Spence, Soccer Mommy, Vampire Weekend, Japanese Breakfast and Snail Mail. 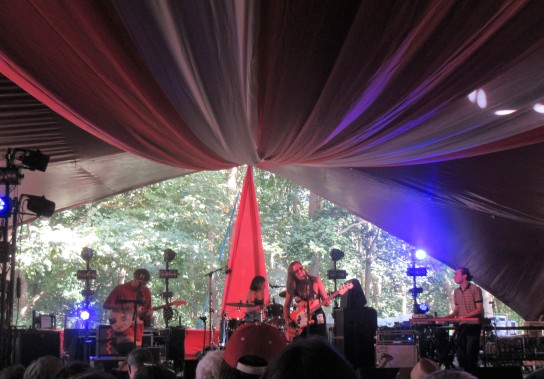 A word on Idles and Shame. Both have won plaudits this year, both for their raucous live performances and their albums, “Joy as an Act of Resistance” and “Songs of Praise” respectively, which have ranked high in most Best-ofs that take punk/indie music seriously, including 6 Music, NME, Loud and Quiet and Rough Trade.  Even the Guardian, which now just follows the mainstream pop/dance choices on the whole, acknowledged them. I’ve enjoyed their live performances, but on record, the odd track at a time is enough for me. I find whole albums, especially Idles, a bit too relentless, and, to be honest, a bit tuneless. The riffs are a bit sludgy too. Best experienced on the stage, I think; and stand back a bit unless you like a lot of laddish moshing.

I thought I’d end with another list. Twenty-one of my favourite live moments of 2018, in no particular order. 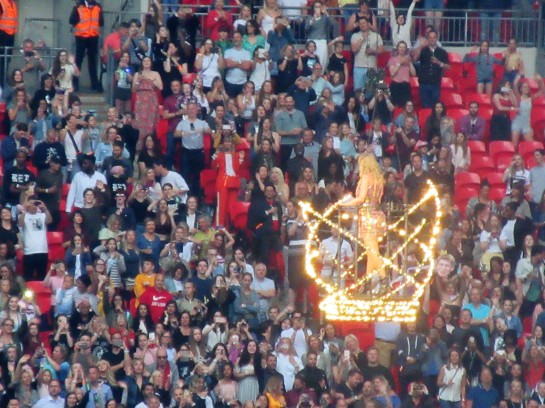 So, 2018 was pretty good! 2019 is already shaping up nicely, with a few gigs already booked, including Faye Webster, Adrianne Lenker (singer with Big Thief), Francis Dunnery (not again!), Black Midi (amazing and rather mysterious young noiseniks), Rival Sons (not heard any of their music, but I’m told they rock), Chrvches (hooray!), Sharon van Etten, Ward Thomas, Nick Mason’s Saucerful of Secrets, Steve Hillage (really!) and Kylie, who is playing Hampton Court Palace in the summer. That should be rather special.

Many more will be added to that list, including, quite soon I hope, the return of Honeyblood, promoting a new album. Can’t wait for that! No 1 album of 2019 slot already booked? We’ll see. Nothing is certain. I mean, we might even end up staying in the EU…

Fingers crossed and have a great 2019.

I'm blogging about the things I love: music, sport, culture, London, with some photos to illustrate aspects of our wonderful city. I’ve written a novel called “The Decision”, a futuristic political thriller, and first of a trilogy. I’m also the author of a book on music since the 1970s called “ I Was There - A Musical Journey” and a volume of poetry about youth, “Growin’ Up - Snapshots/ Fragments”. All available on Amazon and Kindle.
View all posts by John S →
This entry was posted in Music - concerts, lists, reflections and tagged Bruce Springsteen, Catherine McGrath, concerts, Kacey Musgraves, music, review of 2018, Soccer Mommy, Stina Tweeddale, Taylor Swift, The Orielles, Wolf Alice. Bookmark the permalink.