Last week I found myself in North London on three successive nights for my first concerts of 2019. Monday and Wednesday were both at the Lexington in Pentonville aRoad and were part of the Line of Best Fit’s (link) “Five Day Forecast” – a show case for up-and-coming artists. Tuesday was Adrianne Lenker, singer with a Big Thief, at Union Chapel, in Islington.

I took a bit of a punt on this show, not knowing any of the artists beforehand, save for a quick run through on Spotify on the day. There were four bands, all with women in the lead. First up was Deyyess. She only had one track on Spotify – her recent single “Escher Heart”. That’s a lively piece, with a dance beat and a dramatic melody. That was a feature of most of her songs, though she came on and played with just an electric guitar for the first song, “Detail”. I rather liked that song, though it wasn’t typical. A strong theme in Deyyess’s songs was independence and empowerment, as it was throughout the evening. An interesting detail about Deyyess is that she used to play football for the Arsenal women’s youth team, but decided to concentrate on her music. 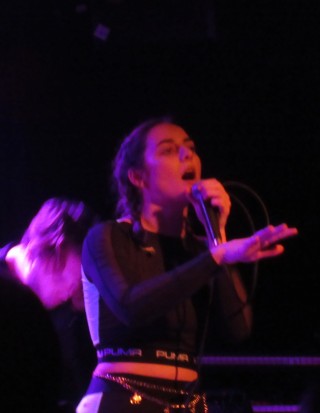 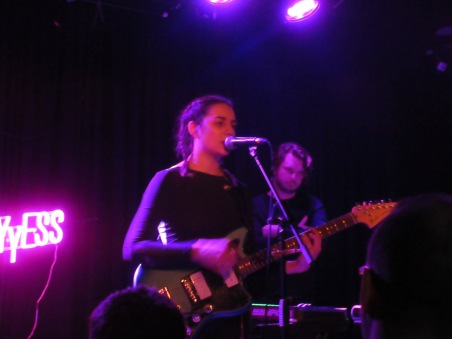 Next on was Millie Turner. She’s quite well-established – one of her tunes, “Eyes on You”, has more than 3.8 million streams on Spotify. Her music was pre-programmed on what looked like an old ghetto blaster or radio. She had an engaging style and the songs reminded me a little bit of Lorde. For a couple of the more introspective tunes she brought on a guitarist to play along with her. On the night, I particularly liked “She was a Dancer”. On listening again to her music, there are some good sounds, including “Underwater” as well as the two already mentioned. No album yet, but I could see her being pretty successful. 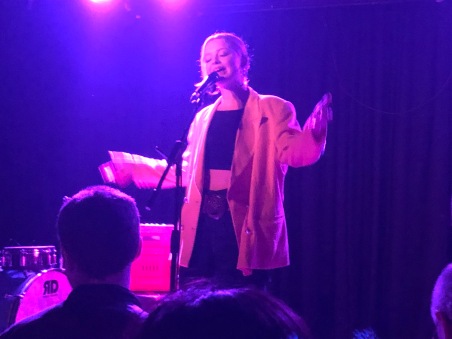 Call Me Loop followed Millie. They feature singer (and dancer!) Georgia Buchanan. Her songs were the most dance-orientated of the evening, and that comes across even more on her recorded output. I think she will benefit from being on a bigger stage, as she likes to move, and the Lexington is not that big. I particularly liked a song towards the end called “Business”, which is a catchy bit of R&B.

Finally, Emily Burns. She’s a bit more well-established, and by now the place was packed. There were also a lot of young women in the audience, many of whom seemed to know all the words. Earlier the place had been a bit blokey, as you get at most indie events (even if the cast list tonight was pretty pure pop). I’m one of the old geezers so I’m not making any judgements! Emily played acoustic guitar and her songs, accompanied by some bouncy pop keyboards, were catchy and likeable in that modern style. Men didn’t come out too well in the lyrics – even the one who was just too nice! “Friends don’t kiss Friends” was one of the standouts. I liked “Girlfriend at the Time” too. She came back for an encore, which she didn’t seem to be expecting, and played “Cheat” to much acclaim.

So, an enjoyable evening. Not much of it was the sort of music I generally listen to – though Emily Burns and Catherine McGrath aren’t miles apart – but it’s good to try different things. And it was only £9. Great value.

I have End of the Road 2018 to thank for my getting to know the music of Big Thief, a New York indie/Americana band, with alternative twist. I didn’t actually get to see them at EOTR, as they clashed with Fat White Family and the Orielles, but my preparatory listening introduced me to great songs like “Masterpiece”, “Shark Smile”, “Paul” and “Parallels”. Adrienne Lenker sings and plays guitar. She has a beautiful, quite fragile voice, which was perfectly suited to the echoey spaces of Union Chapel. She released a solo album called “abysskiss” in October 2018, and tonight’s show was based on that. She came across as being quite nervous, and tuned (or retuned?) her guitar endlessly between songs. It was worth it though, as she had a lovely, mellifluous finger-picking style, which was a perfect accompaniment to her beautiful, dare I say it, ethereal vocals. I was thinking of Nick Drake and early Bob Dylan at times. She opened up to the audience as time went on, and was clearly in awe of the setting and number of people who had come to see her. An absolute delight.

The support act, Squirrel Flower, was pretty good too. Just one woman and her electric guitar. I saw about half her set. The sound was mellow and atmospheric. No engagement with the audience. After her set she raced down to the Lexington and played in the Five Day Forecast.

I had to go to this one. Any excuse to see Faye Webster perform her beautiful songs. I lurrvve her recent single “Kingston”. It is so sumptuous. There were a couple of other acts first. Ohtis was one man and his acoustic guitar, though he usually has a band. He had a couple of catchy country-ish tunes on Spotify. At the Lexington he played some quirky, rather macabre songs, about things like heroin addiction and psychiatric wards. Mmm, nice. 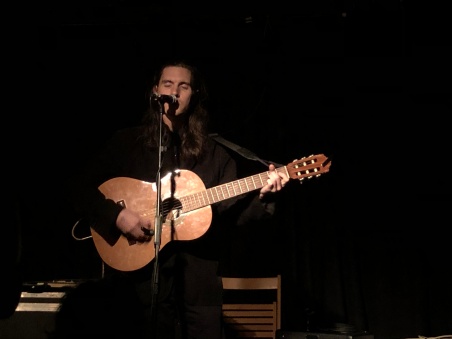 After Ohtis, it was the turn of Gia Margaret. She has an album out called “There’s Always Glimmer”. I rather like it – it’s a wistful, dreamy collection of songs. Her most streamed song is “Birthday”, which has a lovely, upbeat feel to it. It was mainly her and her electric guitar, with some subtle accompaniment from drums and keyboards. It was the first concert she’d played outside her native US – she is from Chicago. She was very modest about things, but played a lovely set with some fine guitar.

Gia’s unassuming style was replicated by Faye Webster. She sat down too and was more subdued than she has been in the past. She did say she’d felt light-headed, so maybe that was the reason. She played mostly new songs (unless they were from her first album “Run and Tell”) but, surprisingly, not “Kingston”, even though she had her pedal steel man, Kippy, with her to provide those sumptuous swirls and twangs. The new songs were lovely, and instantly likeable. Must be a new album soon, so I’m really looking forward to that. The first song was called “I Should Get Out More”, which is a classic Faye Webster title! There were only two songs from the wonderful “Faye Webster” album: “Alone Again” (hooray!) and the closing song of the set, “Is it too much to ask?” No “She Won’t go Away” or “I Know”, which was disappointing, especially when the set was quite short. Maybe it was because she wasn’t well, or maybe it was just because she does things her own way, and doesn’t like to conform to expectations. Which is fair enough. Like I said earlier, the new songs were great. Just surprising, when you are still making your way, and heading up a prestigious gig in a foreign country, that you don’t play your best hand. Here’s to the next time… 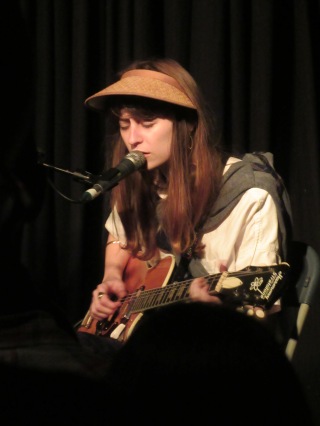 I'm blogging about the things I love: music, sport, culture, London, with some photos to illustrate aspects of our wonderful city. I’ve written a novel called “The Decision”, a futuristic political thriller, and first of a trilogy. I’m also the author of a book on music since the 1970s called “ I Was There - A Musical Journey” and a volume of poetry about youth, “Growin’ Up - Snapshots/ Fragments”. All available on Amazon and Kindle.
View all posts by John S →
This entry was posted in Music - concerts, lists, reflections and tagged Adrianne Lenker, Call Me Loop, concerts, Deyyess, Emily Burns, Faye Webster, Gia Margaret, Line of Best Fit, Millie Turner, music, Ohtis, Squirrel Flower, the Lexington, Union Chapel London. Bookmark the permalink.