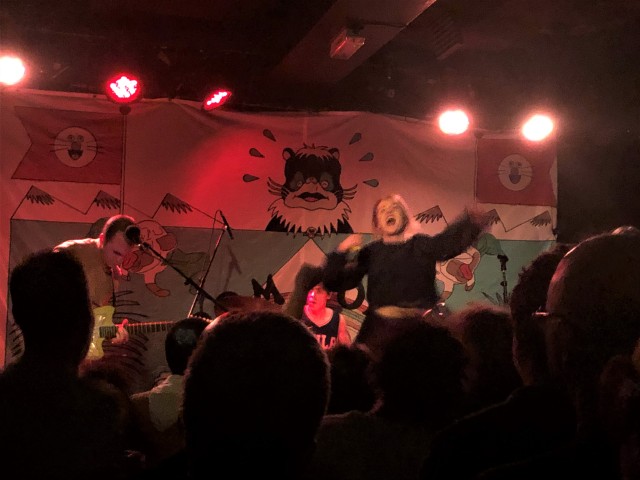 Pom Poko are from Norway. They are an interesting band. A short description of their music would be post-prog-punk. In other words, lots of time changes, all sorts of guitar noodles and some wild riffs. Sounds familiar, but also like nothing else. They all met at the Trondheim Music Conservatory. Their debut album, “Birthday”, was released this year. Marc Riley on BBC 6 Music is a big fan, which is where I got wind of them, and thought their concert last Wednesday at the Lexington, on Pentonville Road, was worth a shot.

And wasn’t it just! It was really pretty amazing. Just so exhilarating. The proggy parts were harder-edged than on record and the punky rhythms were just awesome!  Singer Ragnhild was terrific. She had real charisma – bounced around a lot, smiled a lot too. Effervescent would be a good description. Guitarist Martin made the distinctive sound. Never changed guitars – just piled on the riffs and the variations with aplomb. Fuzzy, discordant, but razor sharp too. The rhythm section of Ola and Jonas held down all those time changes and created the incessant beat.

The whole thing was great. They started, I think, with two great blasts: “”Theme #1” and “My Blood”. Near the end, “Crazy Energy Night” lived up to its name. It was just such fun, made so in large part by Ragnhild’s engaging attitude.

I came out of the concert thinking, when can I see them again? Answer: End of the Road in August/September and then the Scala in October. Can’t wait!

I'm blogging about the things I love: music, sport, culture, London, with some photos to illustrate aspects of our wonderful city. I’ve written a novel called “The Decision”, a futuristic political thriller, and first of a trilogy. I’m also the author of a book on music since the 1970s called “ I Was There - A Musical Journey” and a volume of poetry about youth, “Growin’ Up - Snapshots/ Fragments”. All available on Amazon and Kindle.
View all posts by John S →
This entry was posted in Music - concerts, lists, reflections and tagged concerts, music, Pom Poko, the Lexington. Bookmark the permalink.