Big Thief are a band from New York who play music that gets defined as indie/folk, although they don’t fit easily into any category. They are: Adrienne Lenker (vocals, guitar), Buck Meek (guitar, backing vocals), Max Oleartchik (bass) and James Krivchenia (drums). I first came across them when I was mugging up for End of the Road, where they were playing last year. The first song I heard was “Masterpiece” off their first album of the same name. I was immediately impressed. It was anthemic and delicate at the same time. The delicacy came from the fragile vocals of singer Adrienne Lenker. It was a good place to start my appreciation of Big Thief’s music.

As it happens, I missed the band at End of the Road, as I was watching Fat White Family then the Orielles, but I continued to listen to their two albums, “Masterpiece” and “Capacity” and really grew to like them. The songs are often quite gentle, but will then lurch into a jarring guitar break. The words are rather other-worldly, elliptical; musing on relationships, but not in a conventional way. The songs that emerged as favourites for me were “Shark Smile”, which starts with a screech of guitars and then settles into a rumbling, rolling rhythm, while Adrienne murmurs in a country style about the woman with a shark smile; and second, and most of all, Parallels”. I love that song – I’ve listened to it as much as any other in the past few months. For me, it’s the quintessential Big Thief song. It has a lost soul feel to it, that delicacy, and builds to a chant about parallels, which seems to switch key at one point. The lyrics feel like they are about a relationship, but they might also be about another dimension of space and time. The guitar drifts in and out. And caterpillars come into it at one point! This is all good.

Elliptical, meandering, entrancing, jarring, other-worldly, lost, anthemic, beautiful. The words that describe Big Thief’s music are similar to the ones I’d use to describe Radiohead – think “In Rainbows” crossed with “The Bends”. That occurred to me more than once as I watched the band play at SWX in Bristol on Friday night. They are touring to promote their new album “UFOF”. It’s a lovely album, but you have to listen to it a few times to allow the essence of the songs to reveal themselves. It’s mostly on the subdued end of their musical spectrum, with fewer guitar outbursts (although opener “Contact” gets quite shouty at the end). “UFOF” overall sounds quite like Adrienne’s enchanting solo album from last year, “abysskiss”.

The concert was terrific. I’d not been to SWX before, and liked it. Medium size, a few hundred, maybe a thousand. It was sold out, and the band got a great reception, from a mostly millennial crowd (with a sprinkling of older types, like me!). Looking at set lists from recent shows , it looked like the newer songs would dominate, but that it was unpredictable, as the set varied every night. And we got lucky: there was a great balance of new and established songs. In fact, almost all of my favourite songs got an airing, including “Parallels” about half way through. That was a bit of a bonus, as I hadn’t been expecting to hear it, going on previous set lists. “Shark Smile” was second song in and was greeted like an old friend. Their bounciest tune, though rivalled now by the bluegrassy “Cattails” off the new album. The crowd loved that one too. “Paul”, which might be their best known song, followed  “Shark Smile” – always good to start with some crowd pleasers.

Perhaps the most popular song on the night was “Mythological Beauty” from “Capacity”, a mid-tempo beauty with characteristic lyrical twists. If not that, then it was “Masterpiece”, which was second last in the main set. What a great song! Last was “Mary”, which has the intriguing wordiness of The National, another band with which Big Thief have something in common. An uplifting end to the set. Huge applause, followed by a two song encore: two lovely tunes from “UFOF”, “Orange” and “From”. The first was just Adrienne and her acoustic guitar, though the band looked on.

Big Thief aren’t a demonstrative band: there’s no leaping around, and few words in between songs. Not aloof, although they have a certain New York alternative cool about them. I think they are a pretty modest lot – they express themselves through the music. I was quite taken with the reception they got – I think the band were too. I thought that Adrienne wasn’t far off being in tears as she acknowledged the applause. I saw her solo show at the Union Chapel in January this year. She was quite nervy then, and re-tuned her guitar endlessly. There was less of that in Bristol – being one of four band members isn’t as exposing, even if you are the (reluctant) star.

But modest or not, Big Thief are a band of real substance, who take some standard musical forms – indie, folk, Americana – and twist them into something quite different. They are clearly building quite a following too. Like the National, they might find themselves becoming pretty big without really seeking it. And that’s because they make music that intrigues you and draws you in. And surprises you. You hear new things all the time. If you haven’t heard them, give any of their albums a try, though I’d recommend going through them chronologically, starting with “Masterpiece”. Which is guess what…?

A few more photos (iPhone and cropped, to get rid of the head of the tallest man in the place, who stood just in front of me!). 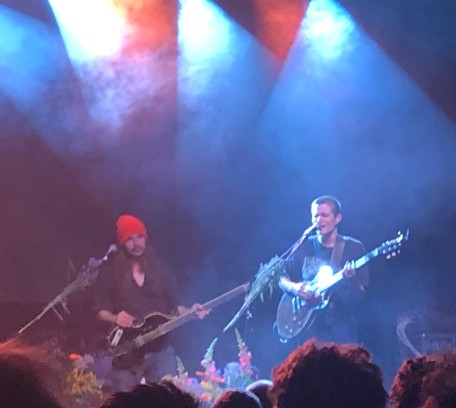 I'm blogging about the things I love: music, sport, culture, London, with some photos to illustrate aspects of our wonderful city. I’ve written a novel called “The Decision”, a futuristic political thriller, and first of a trilogy. I’m also the author of a book on music since the 1970s called “ I Was There - A Musical Journey” and a volume of poetry about youth, “Growin’ Up - Snapshots/ Fragments”. All available on Amazon and Kindle.
View all posts by John S →
This entry was posted in Music - concerts, lists, reflections and tagged Adrienne Lenker, Big Thief, concerts, music, SWX Bristol. Bookmark the permalink.