A Thames Journey: (5) From Cholsey to Marlow

This, the fifth of my Thames Journey series, covers a 36 mile stretch of the river, which we covered in three walks in 2016 and 2017. It’s a part of the journey where the river does a 180 degree turn, heading south then east, then north, before turning east again. Bending and twisting all the while. The Chiltern Hills lie to the north and as the land rises we have some of the most spectacular scenery along the river. There is some of the most spectacular wealth too.

We picked Cholsey to start this leg because it had a railway station. We finished at Tilehurst, just before Reading, for the same reason. I’m not sure quite how long the walk was, as the Cicerone Walking the Thames path guide divides up this stretch of the river differently, but I’d say around 13 miles, give or take a mile. It felt long! Partly because we walked past Tilehurst towards Reading, then changed our minds and doubled back. Can’t quite remember why now. I think it was a pretty featureless stretch and we decided Reading station was a bit too far.

We made our way down from Cholsey station to the river and headed downstream. The first landmark was the Beetle and Wedge pub in Moulsford. I’d been there for dinner many years ago after a trip up to Oxfordshire for the annual reunion I have with some of my friends from university. The food was pretty good, as I recall. We just stopped outside for a tea break this time. 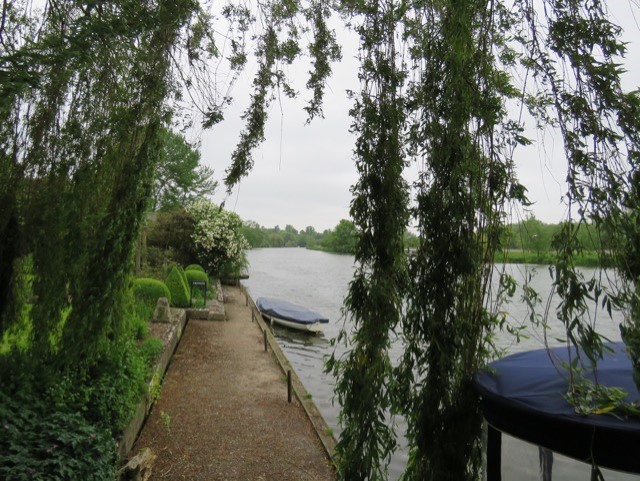 Looking upstream from the Beetle and Wedge 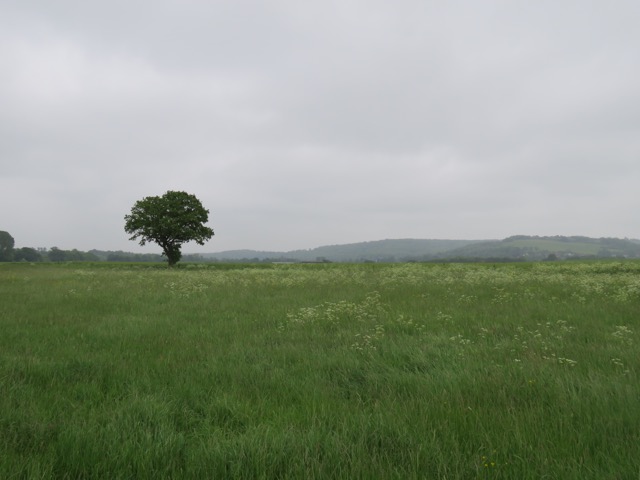 The walk along the river towards Goring was pleasant: meadows and clusters of trees. The village of Goring, twinned with Streatley on the opposite side of the river, dates back to ancient times. The church is from the 13th century. The Icknield Way and Ridgeway cross the Thames at this point. We stopped for lunch at a pub, which I think was the John Barleycorn. I recall having a rather nice pie and a couple of pints, which took me a while to walk off! 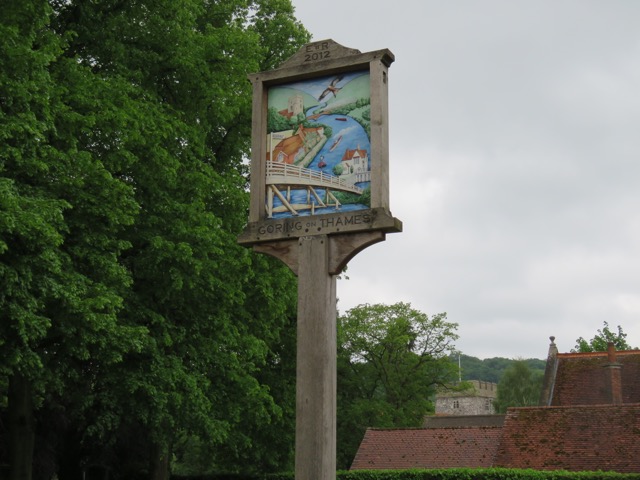 This is Gatehampton railway bridge, just downstream of Goring.

About half way between Goring and another pair of villages, Whitchurch and Pangbourne, you divert off the river path and head uphill. There were some lovely views.

We descended into Whitchurch. The iron bridge there, painted white, was opened in 1902, and is one of two remaining toll bridges on the Thames. The other is Swinford Bridge, which featured in part three of this journey. Pedestrians have been able to cross the bridge for free since decimalisation in 1971; for vehicles the cost is 20p! We crossed over into Pangbourne, named after the River Pang, which joins the Thames at this point. Pangbourne is today best known for being the home of Kenneth Grahame, author of The Wind in the Willows, for the last eight years of his life (he died in 1932). The adventures are inspired the river in this part of the world.  A little further downriver, Mapledurham House is thought to be the model for Toad Hall. I knew nothing about this when we walked this stretch, so all I have is a photo of Mapledurham Lock! 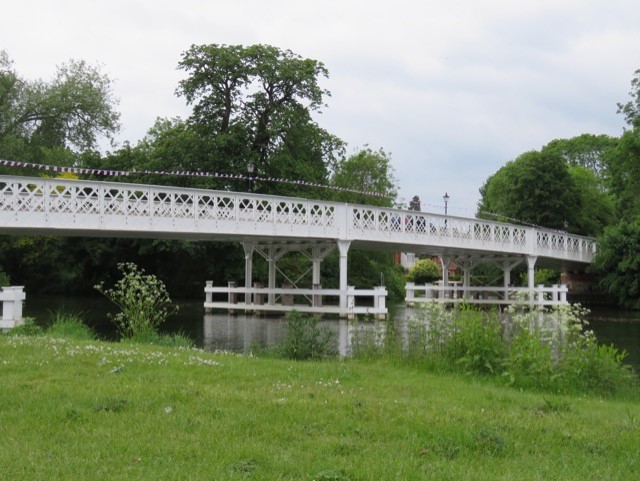 The toll bridge at Whitchurch.

More lovely scenes as we headed out of Pangbourne towards Mapledurham. With thanks to Jon for the photo of the goose patrol. 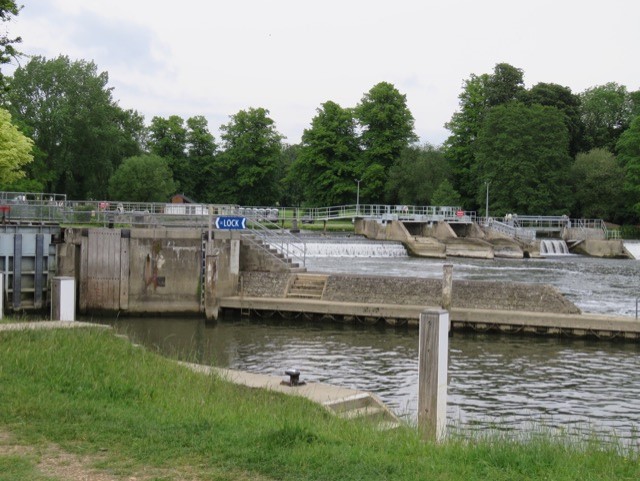 Eleven months later we returned to Tilehurst to walk the next stretch of the river, to Henley. This was one of the most picturesque of the journey – once we had got past Reading! In fairness, once we had left Tilehurst, where we were walking along a fairly narrow path enclosed by a high railway embankment, the Thames Side promenade was quite pleasant. Caversham was opposite, recently connected by a footbridge called the Christchurch Bridge, after the meadows on the Caversham side.  It opened in 2016. There was a competition to name it in which one of the popular choices was De Montfort bridge. That’s a name I tend to associate with Leicester, but nearby Fry Island is known for being the site of a duel in 1163 between Robert de Montfort and King Henry II’s standard bearer, Henry of Essex. The latter was accused by the former of dropping the royal standard in a battle with the Welsh. A duel ensued, in which De Montfort triumphed. Henry of Essex was taken to Reading Abbey where he recovered from his wounds. Thereafter he became a monk! 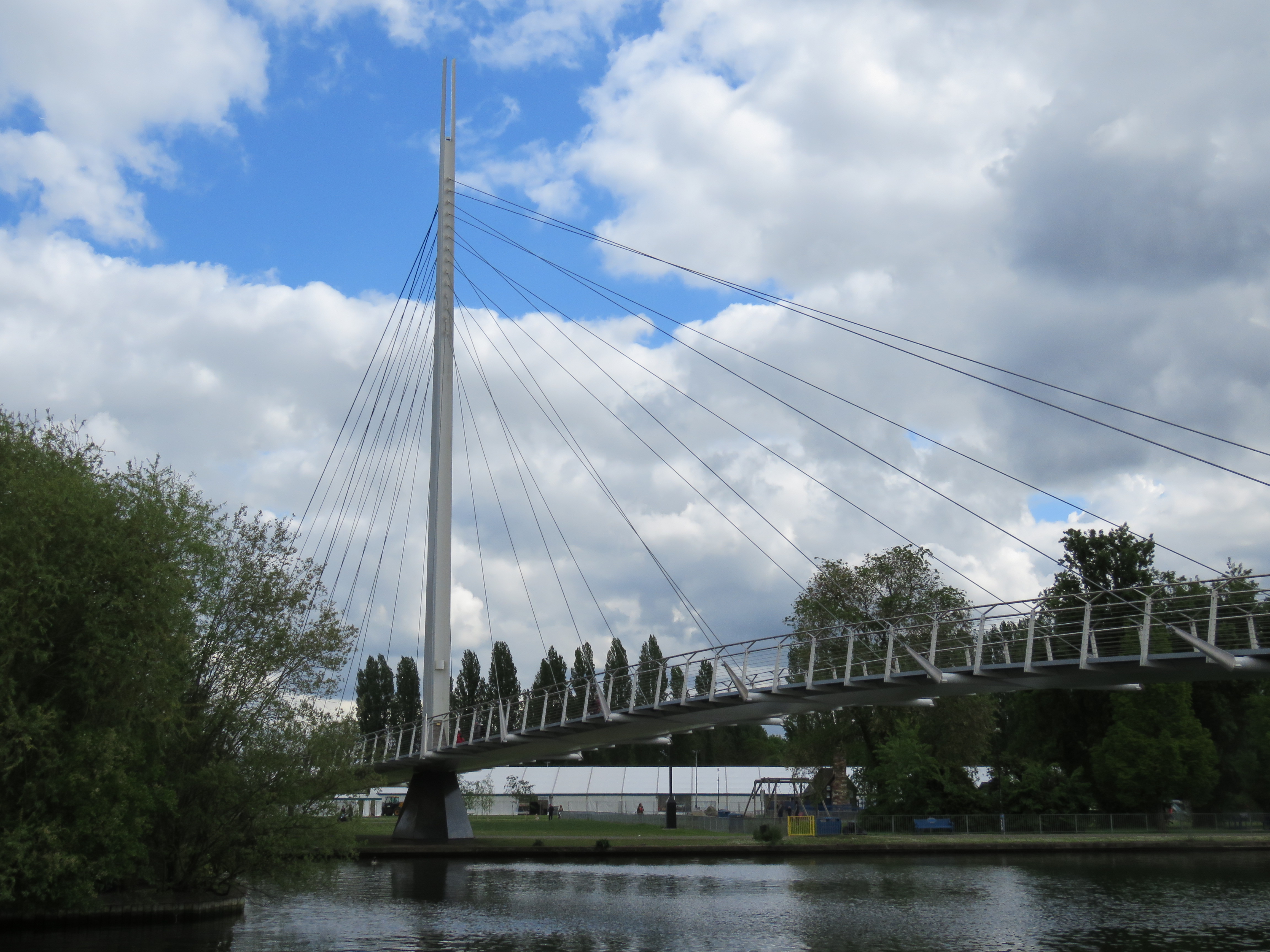 Evidence of Reading as a town dates back to the 8th century. Peter Ackroyd offers three possible sources of the name: the settlement of Reada, a Saxon leader who invaded the area; the word rhea, which means river; or redin, which is fern. My money’s on the Saxon leader. It was an important trading and ecclesiastical centre in the Middle Ages, with the Abbey at its centre. It suffered in the Civil War and was the scene of the only significant battle on English soil during the 1688 Glorious Revolution. The iron and brewing industries grew in the 18th century, and later it became well known for biscuits! Today it has become a major centre for high tech industries, taking advantage of its good transport links and proximity to London. And, of course, there is the Reading Festival, the biggest music festival after Glastonbury, and teamed now with a parallel event in Leeds. It has gained a reputation in recent years for being a post-GCSE gathering for all the 16 year olds; but it started as the National Jazz Festival in Richmond, London in 1961. It settled in Reading, next to the river, in 1971. By the mid-70s it was the main rock festival in the UK. I recall putting Reading fourth in my university choices for the sole reason that it was the home of the festival! But I have never been, having only started going to festivals in my 50s. I think I’ll stick with Latitude, End of the Road and Green Man now. Here’s hoping they’ll be back in 2021, but it may be a close call.

Soon after the Christchurch Bridge we came to the point where the River Kennet joins the Thames. That brings back memories for me and Jon. In the summer of 2013, in blazing heat, we cycled from Reading to Bath along the river and the Kennet-Avon canal, stopping overnight in Hungerford and then Devizes. It was a great adventure, quite arduous in places, but with some wonderful scenery and some interesting encounters. I wrote a piece about it at the time, which still gets quite a few hits to this day. See the link above.

We passed by Sonning and Shiplake as we made our way to Henley. Sonning is another Saxon settlement – Sunna’s people – though there is a history of earlier settlements too. Shiplake means the stretch of water where sheep are washed. Tennyson married there and Orwell lived there as a boy. There is a college on the banks of the river, a private school. We didn’t know this as we approached. There was no-one around and it seemed possible to walk through some of the grounds. So we had a little look. Maybe it was half term. 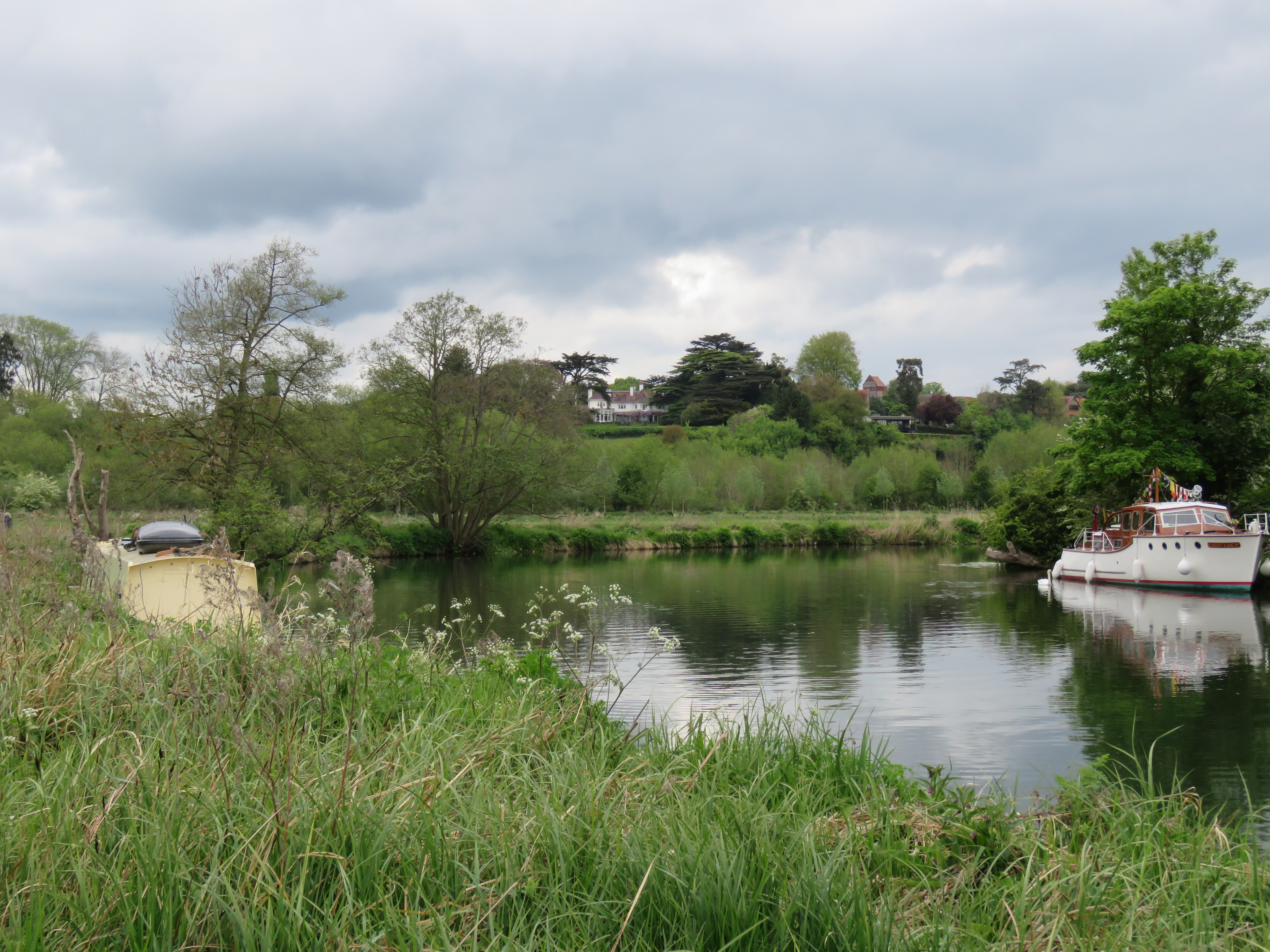 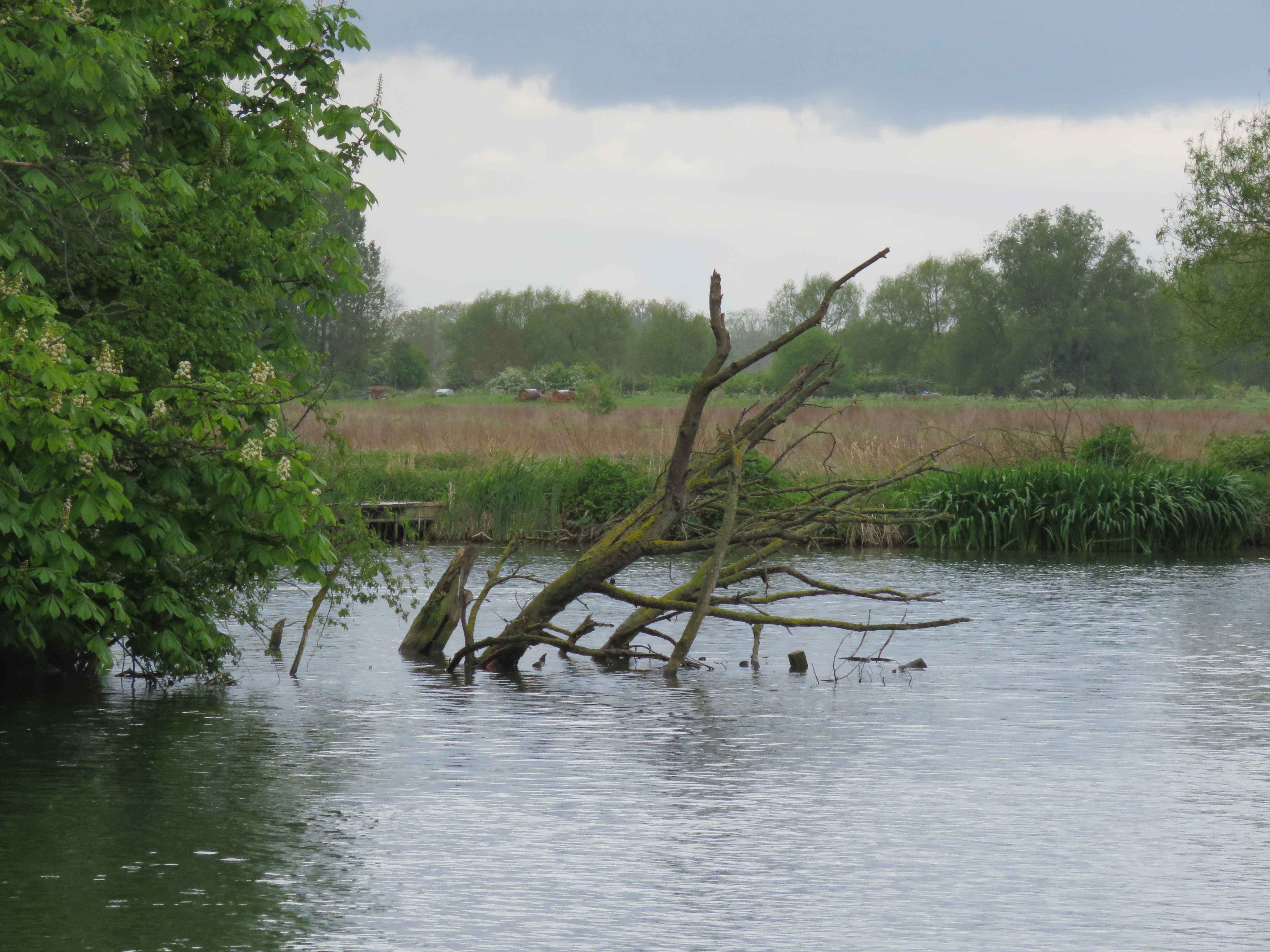 Close to Henley we came upon Marsh Lock and weir. It is an impressive construction, and the surrounding houses are equally striking. 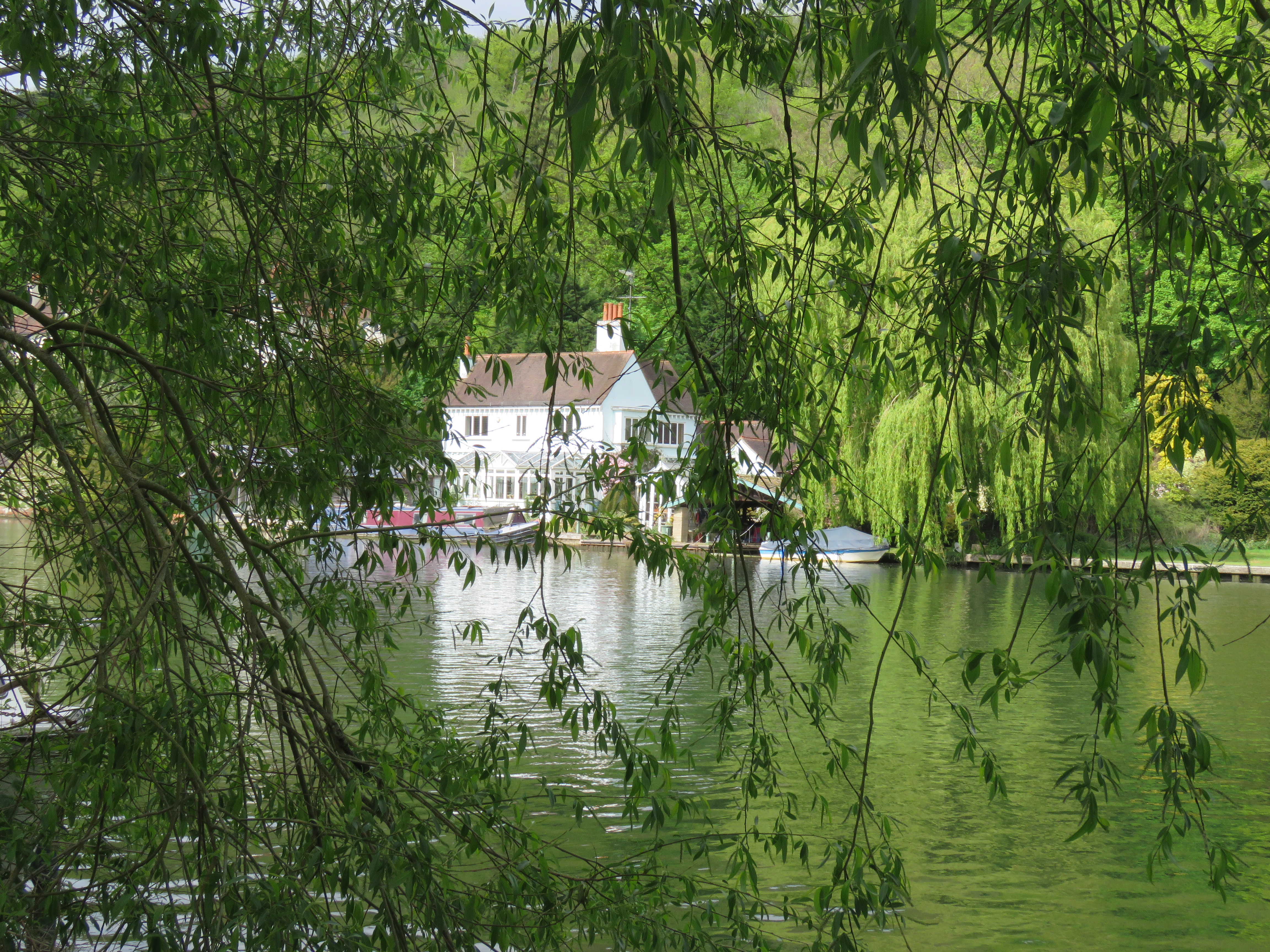 The view of Henley as you approach is rather beautiful. The church tower looms over the town. The bridge is much admired  – compared in the past with those of Florence. The church itself seems to date from the early 13th century; the tower was built around 1550. Henley means high wood or old place. Today it is best known for its regatta. That began in earnest in 1839; but before that Henley was the location for the early boat races between Oxford and Cambridge universities. The first was in 1829, starting from Hambledon Lock, downstream of Henley. Soon after the race began the boats collided, and it had to be re-started. Oxford won. 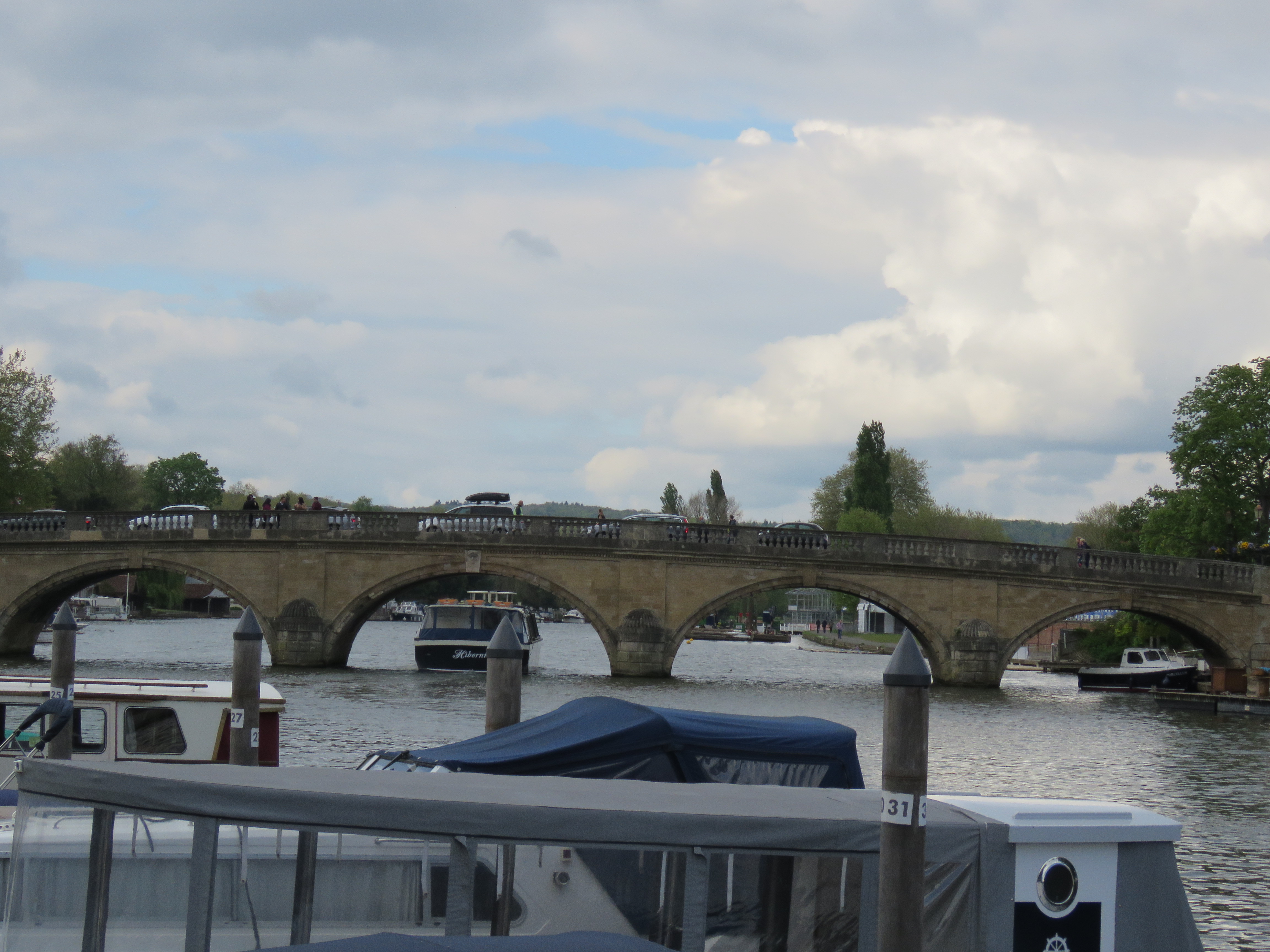 We arrived in Henley and felt like some refreshments. We came across the Chocolate Café, on Thameside, upstream of the bridge. Highly recommended if you are ever in Henley and want to stop for a tea or coffee. The cakes – chocolate and otherwise – are sumptuous!

This was another attractive stretch of the river. Just out of Henley we came upon Temple Island, which is the starting point for races in the Regatta. The Temple was originally a fishing lodge for nearby Fawley Court, an historic house, and was designed by architect James Wyatt in 1771. Today it is owned by the Henley Regatta and is both a place for grand functions and a nature reserve. Presumably the nature reserve has the upper hand at the moment.

Further downstream there was a brief diversion from the river bank, slightly uphill. From that vantage point we could see the distinctive white buildings that were originally part of Medmenham Abbey, a Cistercian abbey founded in 1201 under the ownership of Woburn Abbey. It was closed in Henry VIII’s purges, but not destroyed. It took on a number of lives after that, most notoriously when it became the venue for the Hellfire Club in the mid 18th century, a group of establishment figures who met to indulge in activities frowned upon by polite society, including “obscene parodies of religious rites.” Today the place is in more discreet private ownership. I didn’t know any of this at the time – it looked to me like it was probably a conference centre. This part of the world is conference centre land – easily reached from London, but a world apart. 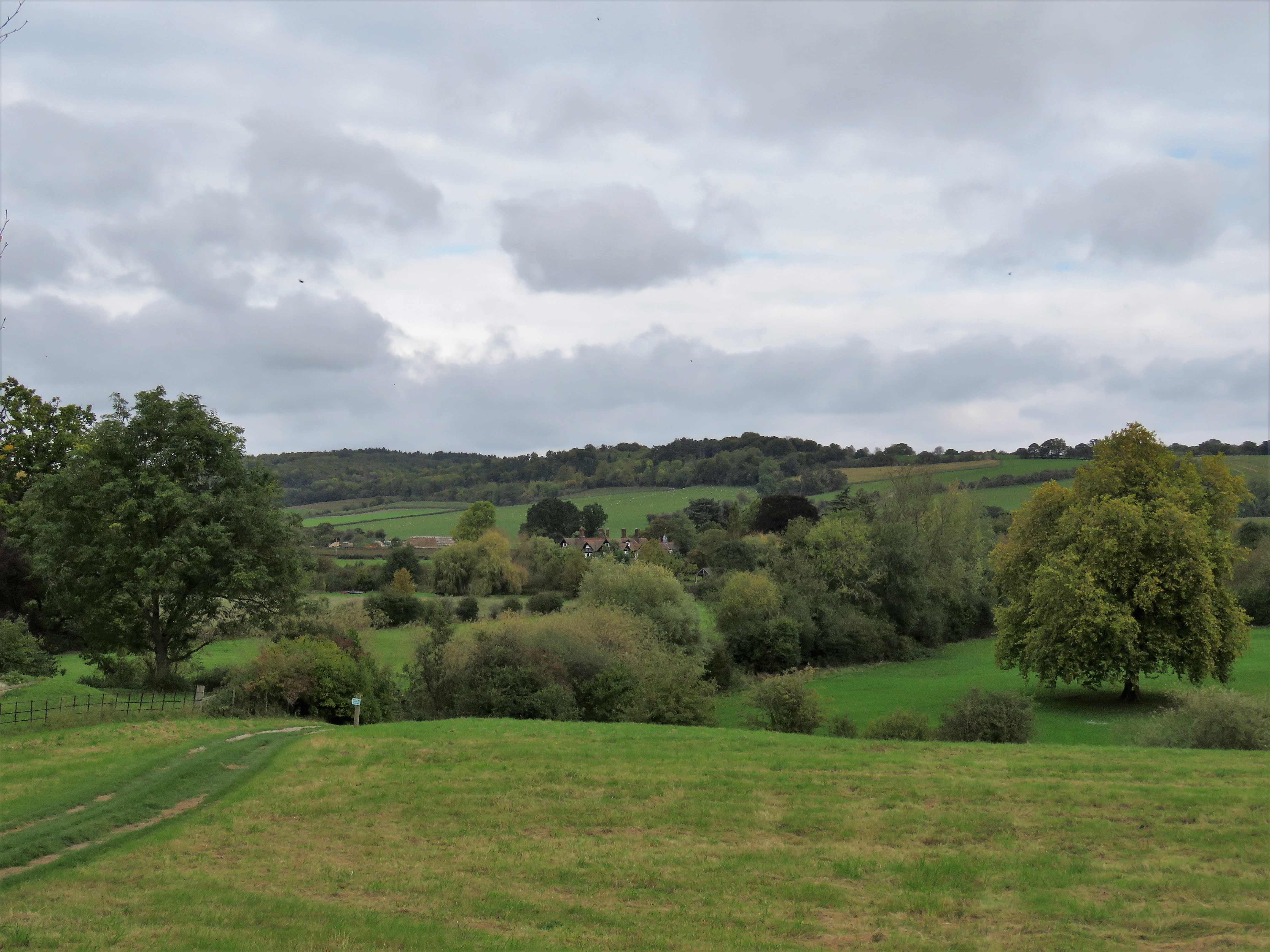 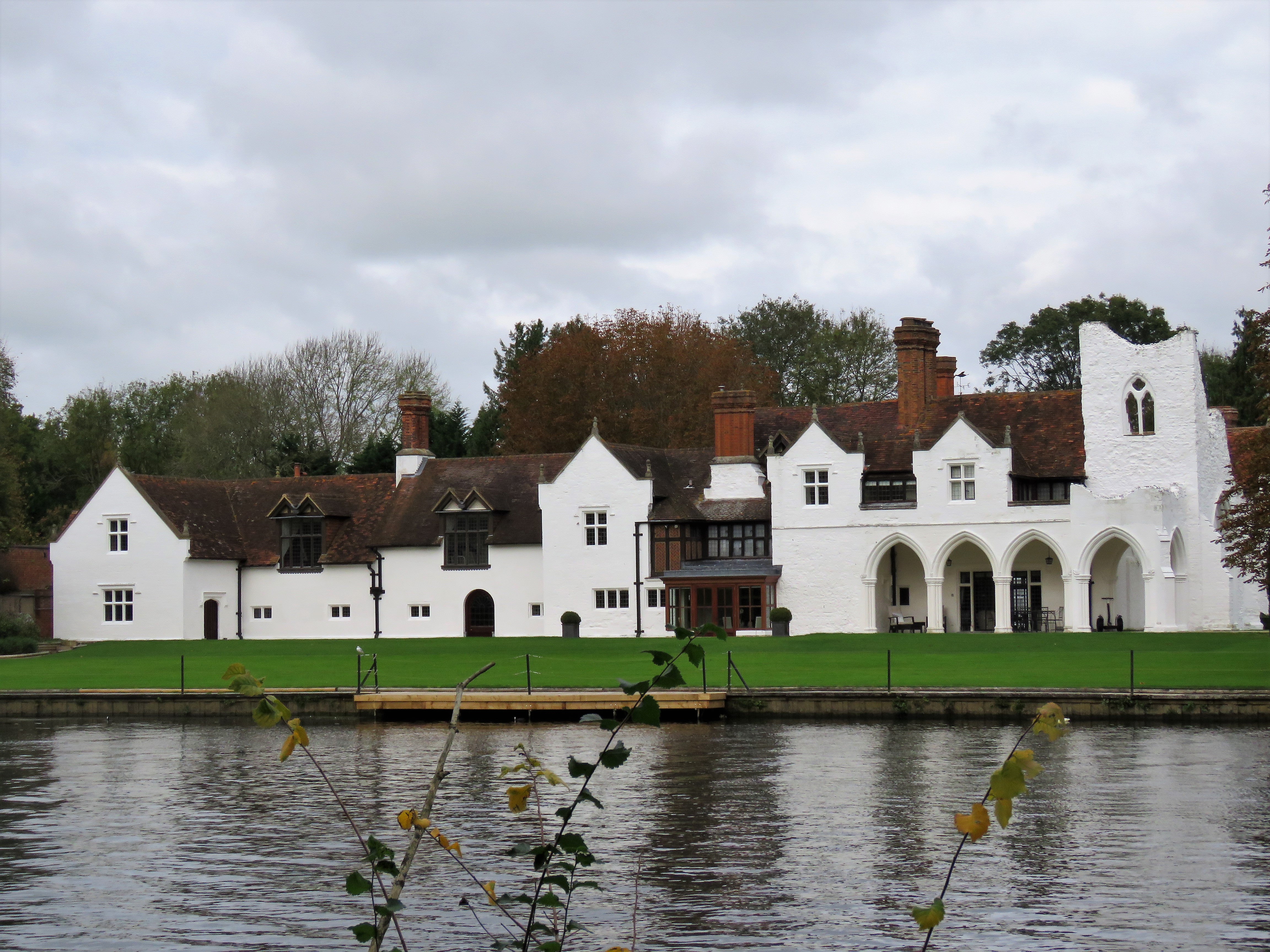 Nearby Danesfield House, up on the hill in the next photo, is now a hotel. Way back, the site may have been a hill fort, occupied by the Danes. In the 20th century it was owned for a while by the RAF and was an intelligence centre during the Second World War. 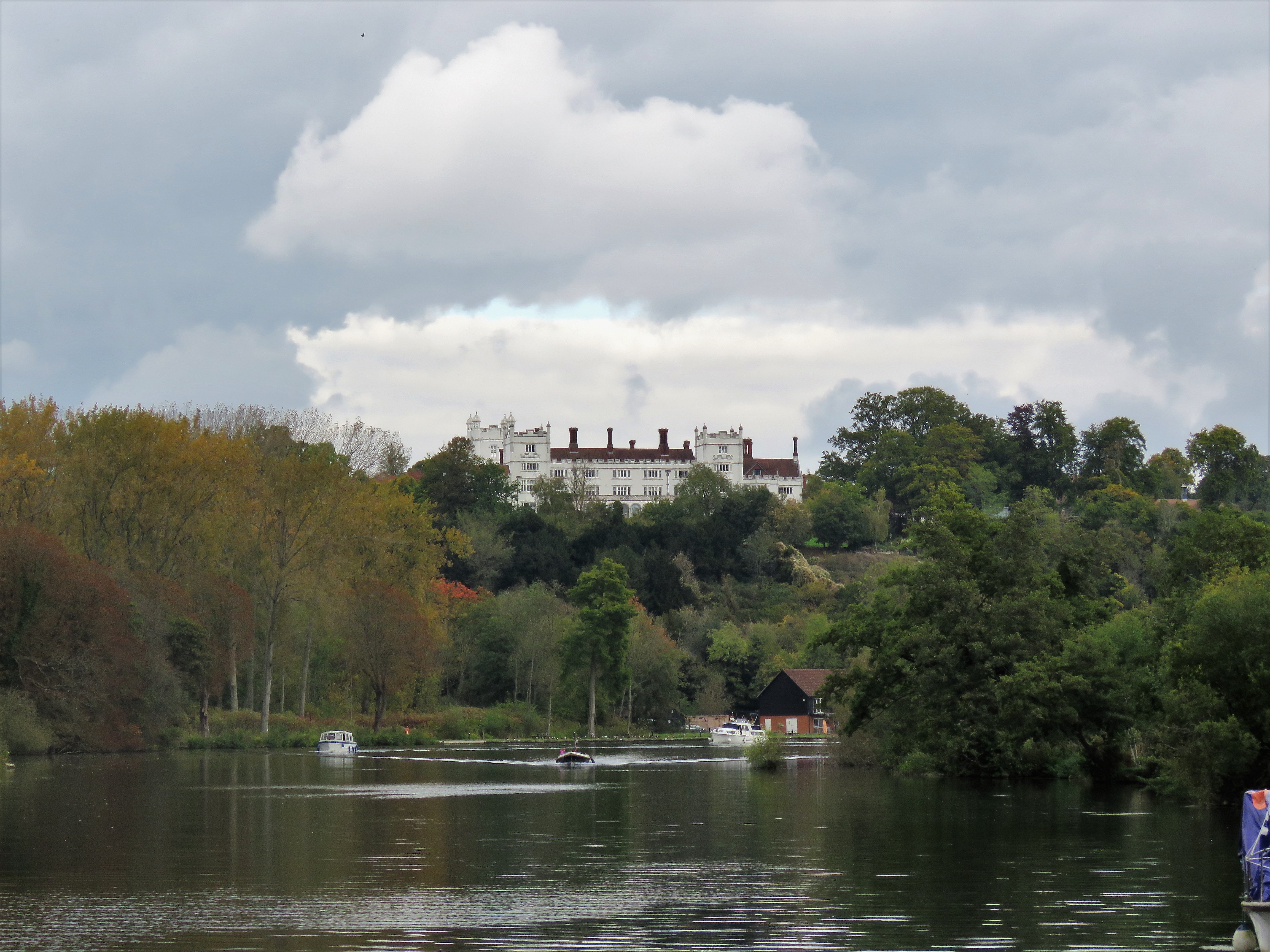 Marlow means low and marshy ground. It has suffered from floods – the worst in recent times was in 2014. The approach from upstream is quite similar to that of Henley – the bridge and the church tower standing out. The bridge is relatively recent by local standards – opened in 1832. It was wooden before that. The architect, William Tierney Clark, modelled it on Hammersmith Bridge, a place dear to my heart, as a later episode will expound upon! He went on to design the bridge that connects Buda and Pest in Hungary. Now, that is something special. 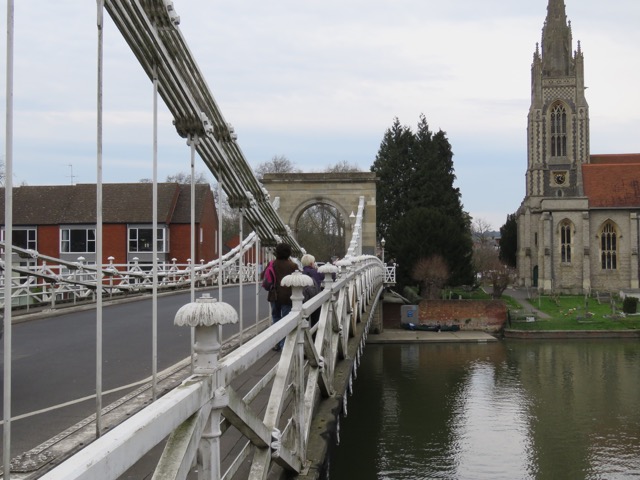 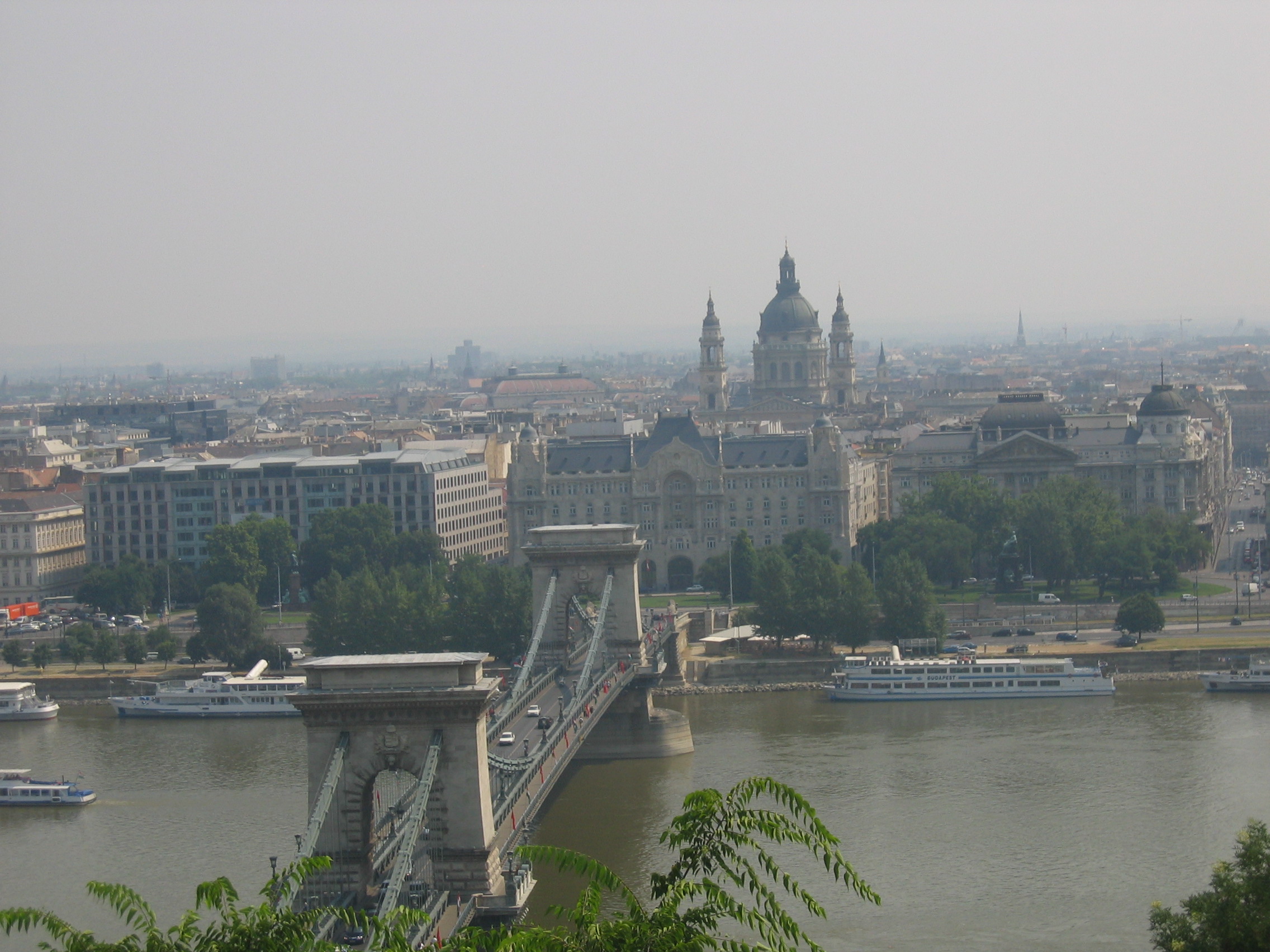 That’s it for this part of the journey. In the next episode, we will creep towards the outskirts of London, where the Thames grows mighty and tidal.

I'm blogging about the things I love: music, sport, culture, London, with some photos to illustrate aspects of our wonderful city. I’ve written a novel called “The Decision”, a futuristic political thriller, and first of a trilogy. I’m also the author of a book on music since the 1970s called “ I Was There - A Musical Journey” and a volume of poetry about youth, “Growin’ Up - Snapshots/ Fragments”. All available on Amazon and Kindle.
View all posts by John S →
This entry was posted in A Thames Journey and tagged Henley, Marlow, Photography, photos, reading, River Thames. Bookmark the permalink.

1 Response to A Thames Journey: (5) From Cholsey to Marlow