Last night was a night of nostalgia, the best sort of nostalgia. A celebration of the music of David Bowie, performed by Holy Holy, a group put together by the great producer Tony Visconti, who worked with Bowie on many of his finest records, from the Man Who Sold the World in 1970, to Bowie’s final album before his death in 2016, Blackstar.

The concert, at the Barbican, was originally scheduled for 2020. Since then Woody Woodmansey, the drummer from the Spiders from Mars, Bowie’s legendary backing band in the early 70s, has dropped out – over covid vaccination issues, according to the press. Last night’s band comprised Visconti himself on bass, Steve “Smiley” Barnard on drums, guitarists James Stevenson and Paul Cuddeford, Janette Mason on keyboards, Visconti’s daughter Jessica Lee Morgan on acoustic guitar, sax and backing vocals, and finally Glenn Gregory on vocals. Glenn made his name as the vocalist for the brilliant 80s electro-pop band Heaven 17, whose hits included Temptation and (We Don’t Need This) Fascist Groove Thing. Classics, both.

Holy Holy have been playing Bowie songs since 2014, though I must admit I hadn’t come across them until Dave asked if we fancied going to the Barbican show. Their website asserts, “We are not a tribute band; we are the real deal.” Well, maybe they are both: a really good tribute band, but with authentic Bowie connections, primarily through Visconti. And they are all very accomplished musicians – the quality of the performance last night was astounding.

The only thing more astounding was the setlist. It was unbelievably good! They have a fantastic back catalogue to draw upon of course, but this really was a dream. The best thing to do is just list it – any Bowie fan will immediately just go, wow!

A strong emphasis, you can see, on the early 70s albums, and some good rocking too. Funnily enough, the only one of these that Visconti produced exclusively was The Man Who Sold the World. In previous incarnations Holy Holy have performed the whole of this album. We – Dave, Jon, Tony and me – were kind of expecting that to be the case last night. It would have been interesting, as long as there were a few hits afterwards. But when Glenn announced Lady Grinning Soul after the darkly rocking Width of a Circle, we knew we were in for a night of pure entertainment. I’ve loved Lady Grinning Soul from the moment I first heard it on Aladdin Sane when I was 14. It is such a beautiful, jazzy tune, with a typically strange Bowie twist. It spoke of things I knew nothing about, but I could imagine what they might be. That applies to a lot of Bowie’s great work in the 1970s. As a teenager living in Suffolk and then the East Midlands, I was so far removed from the world that Bowie inhabited. But I, and millions of others, could inhabit it through his songs.

The crowd, unsurprisingly, tended towards the fifty-pluses, but it wasn’t long before a decent number of people were up on their feet, encouraged by Glenn Gregory. So many anthems! I was interested to see how well Boys Keep Swinging went down. It has a great beat, if it isn’t one of Bowie’s best known. Naturally Ashes to Ashes was an early highlight; and All the Young Dudes has truly been reclaimed from Mott the Hoople. But for me, the very best of all was the sequence which began with an eerily beautiful Space Oddity, continued with The Man Who Sold Who Sold the World, with that wonderful guitar motif; took in a sublime Starman, the song that introduced so many of us properly to Bowie; and finished with Heroes, forever a song of hope as well as a moment of defiance and celebration. Like many in the audience, I’m sure, my thoughts turned to the people of Ukraine and what they are going through right now. I wanted the stage to be bathed in yellow and blue light at that moment. Heroes for a lot more than one day. 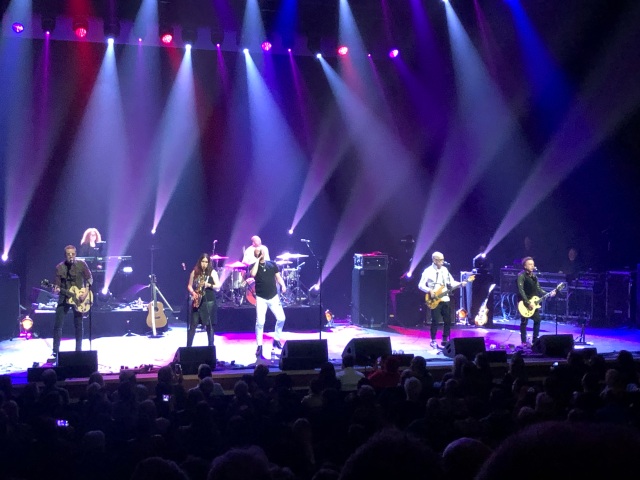 How could you top that? Well, the band certainly did their best to match it for the rest of the show. Glenn introduced Rock’n’Roll Suicide as the song he most likes to sing. He told us a story about how, when Tony Visconti invited him to join the band after an encounter at Abbey Road studios, he said that Glenn’s voice had a little bit of Bowie in it. Of course it did, Glenn said to us. Every pop singer in the early 80s, especially in a cutting edge band like Heaven 17, was going to have been hugely influenced by David Bowie. And that dramatic song was followed by another, perhaps the most dramatic, Life on Mars. Another one that stirs so many teenage memories! And then the guitars cranked up for the last song of the main set: an awesome Moonage Daydream. James Stevenson had Mick Ronson’s Gibson Les Paul sound off to a tee throughout. Wikipedia tells me he was in the London punk band Chelsea, then Generation X, then Kim Wilde’s band. He later became a member of Gene Loves Jezebel. Steeped in rock’n’roll. 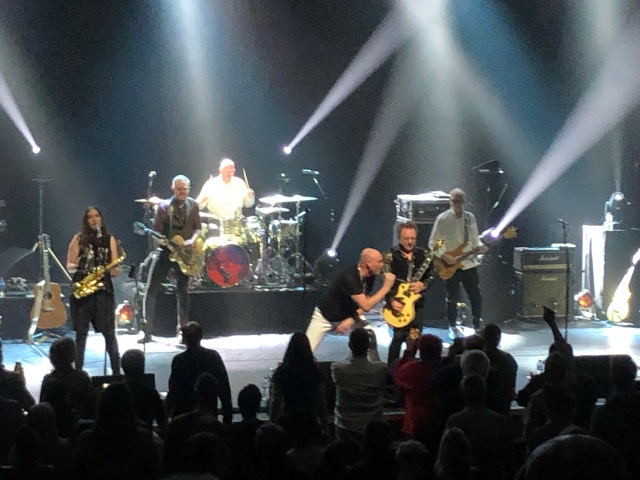 There was a lovely touch in the encore, when we fast-forwarded to Bowie’s penultimate album, The Next Day (2013) for a rendition of the lead song from that album, Where Are We Now? At the time it came out I found it a bit depressing – it might have been the video, as well as my resistance to songs about growing old (I’ve got over that!). Now I find it a beautiful, wistful tune, which, of course, now has an extra touch of the elegiac. And all those Berlin references strike a chord too. There was a lot of love for Bowie in the audience at that moment.

It wasn’t going to end with that though. The band changed gear and we had a rousing version of Rebel Rebel. Just fantastic. A timeless song, but one that also takes me back to hitching lifts home from school in Oakham on Saturday afternoons in 1974. Yes, we did that sort of thing in those days.

And that, we thought, was it. But no, Tony took centre stage to tell us a couple of Bowie stories, the first about his time in Berlin with Iggy Pop, the second about a time in Switzerland. At that point Glenn whispered in his ear that if they wanted to do another song he’d better get on with it. Good call! The story was wrapped up and the band reassembled for another punch-the-air rock’n’roll celebration, Suffragette City. Truly, the band that keeps on giving!

I'm blogging about the things I love: music, sport, culture, London, with some photos to illustrate aspects of our wonderful city. I’ve written a novel called “The Decision”, a futuristic political thriller, and first of a trilogy. I’m also the author of a book on music since the 1970s called “ I Was There - A Musical Journey” and a volume of poetry about youth, “Growin’ Up - Snapshots/ Fragments”. All available on Amazon and Kindle.
View all posts by John S →
This entry was posted in Music - concerts, lists, reflections and tagged Barbican, concerts, david bowie, Holy Holy, music, Tony Visconti. Bookmark the permalink.

4 Responses to Tony Visconti’s Holy Holy at the Barbican, 13 March 2022