I’m wrapping these four shows up in one review as I have a busy November coming up, with 12 gigs at the last count – and the start of the World Cup!

The concerts took place over the last three weeks. I saw Roxy Music in that time too, but that had to be a separate review as it was such a special event. (Click on the link above if you’d like to read it.)

Jazz, folk, soul/funk and abstract folk noise (or something like that) are all on the menu. I’ll take them in chronological order.

Ravi Coltrane at the Barbican, 11 October

This was a sensational two hours of music, led by Ravi Coltrane, the son of two jazz greats, John and Alice Coltrane. Ravi is in his fifties and told us that he had avoided playing his parents music all his life – until now. On the whole he steered clear of John’s best known pieces, though there was a version of Giant Steps, which I didn’t really recognise until near the end. I think they might also have played Alice’s Journey in Satchidananda – certainly the opening bars of one tune received a big cheer. It didn’t really matter what they were playing because the band was so good: Ravi on saxophones, Rashaan Carter on bass, Gadi Lehavi on keys and Elé Howell on drums. (I’m grateful to the website Marlbank for the band members’ names). The virtuosity of all the band was astonishing at times, particularly Elé Howell’s drumming. It was fascinating to watch him: elaborate, but always holding down the beat. Rashaan Carter’s bass – double and electric – was subtle and vibrant. Two pieces began with his bass solos – so warm and melodius. And Gadi Lehavi’s piano runs were breathtaking – think the best of 70s jazz rock.

And leading the way, Ravi Coltrane himself. Not trying to sound like his father (who died when he was two). But with a range of expression which was worthy of the great man. I particularly liked it when he played the soprano sax (the long thin one). An instrument that combines eerie beauty with journeys to the outer realms.

The two hours flashed by. The sounds, the rhythms, they were all so absorbing. I think Dave, who was with me, would agree: we were lost in music. 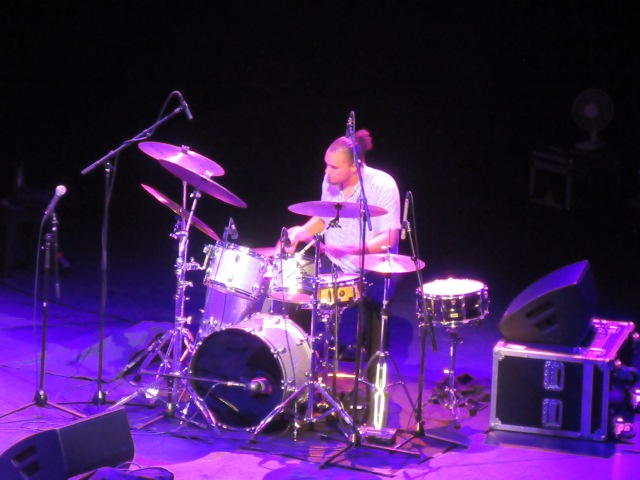 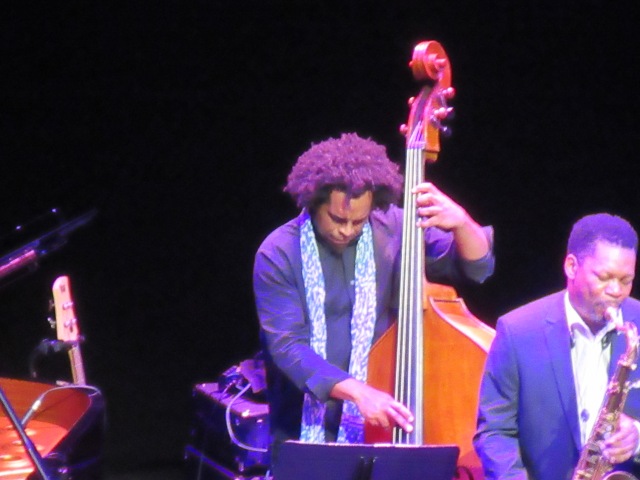 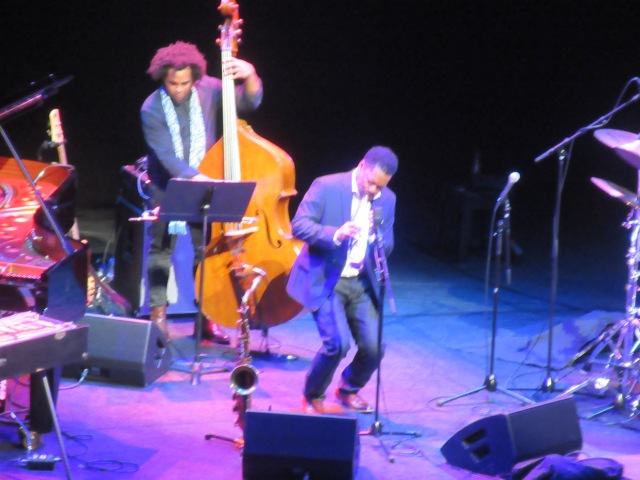 The Unthanks at King’s Place, 15 October

The Unthanks are two sisters, Rachael and Becky, who make richly varied folk music that is rooted in their native North-east. They have core of band members, including Adrian McNally on piano and keys (also a songwriter and arranger), Niopha Keegan on violin and vocals, Chris Price on guitar and bass and Lizzie Jones on trumpet. Kath and I saw them at the first of two shows on the same day at King’s Place. Ours started at 4pm, and with interval, finished around six. Both shows were sell-outs.

I’d known about the band for some time before I really got into them with the release of their album Mount the Air in 2015. I particularly liked the dreamy Flutter and the more traditional Magpie from that album. The two sisters sing some beautiful harmonies, tinged with that north-east accent. They have just released a new album, called Sorrows Away. It’s full of tales of love and mystery, broken hearts – and disused coke ovens! It formed the basis of the evening’s music, though there were visits to their past, including wonderful versions of Flutter and Magpie. I think they said the latter was now part of a soundtrack to the Worzel Gummidge film.

The band was an eleven-piece for these shows, which lent itself to that rich variety of modern and traditional folk. The harmonies, often supplemented by Niopha Keegan, were a joy, though they strained at some of the higher ranges. A highlight was Lizzie Jones’ trumpet, resonant and wistful. Inevitably I thought of that beautiful, sad trumpet accompaniment to Elvis Costello’s song Shipbuilding. That could have fitted seamlessly into this set.

If you haven’t heard the Unthanks, do give Mount the Air and Sorrows Away a listen. You’ll find them a rewarding experience. This concert certainly was.

VS Soul and Funk Orchestra at Ronnie Scott’s, 20 October

Kath and I met up with Dave and Fiona for this one. It was another early show – 6 o’clock – with the band playing another set that night. Quite a common feature at Ronnie’s, Dave tells me. It was billed as a tribute to James Brown and Prince, so we expected it to be very funky. Dave and I speculated beforehand about what Prince songs they might play: maybe some of the earlier, less well-known material, where the funk ruled. Controversy, I Wanna Be Your Lover, that sort of thing. Wrong! They kicked off with an awesome Let’s Go Crazy, and then it got even better!

Twelve band members were crammed onto the small stage – and just off it, in the case of the strings. As well as strings we had brass – the full funky soul arsenal. It’s a great but slightly odd experience at Ronnie’s; you’re close to the band, a full on experience; but you are sitting at a table and quite possibly eating. I found myself tapping a toe to the funk while still working my way through my steak!

And what a show! The band were superb – they had everything to do justice to the great songs they were playing. Prince and James Brown alternated, with a few more Prince songs. The lead singer, Ashton Jones had a terrific voice and a personality to match. His rendition of James Brown’s It’s a Man’s Man’s Man’s World was out of this world. And the selection of Prince songs was a dream come true: 1999, Alphabet Street, Kiss and Sign o’ the Times, to name a few. I was really surprised (and delighted) to hear the latter. It was played faster than the original and with full horn accompaniment. A brilliant treatment.

It was so good throughout, but the last two songs deserve a special mention. Get Up (I Feel Like Being a Sex Machine) was so funky that everyone just had to stand up and dance, even in the confines of Ronnie’s. Such a groove! And then, after a brief pause, that guitar began… It couldn’t be could it? Yes it was! Not funky, just one of the all-time classics. Purple Rain. Blimey, I think there was a tear in my eye at that point. Guitarist Harry Greene is the mastermind of the ensemble. He stayed near the back and played the funk for the most part; but for this one, when it was time for the solo, he let rip. It would have done Prince proud. And it was such a loving rendition of the song that they even had that stately string outro. It was a nice touch, giving the string players a moment in the spotlight – the final say in fact.

VC Soul Funk Orchestra are a south London collective, I think. I’m grateful to Close Up Culture website for the band members’ names; if you read the review on the site, there’s a lot more detail. And if you love the music of Prince and James Brown try and see this band. I’d love to see them again.

No photos for this one – not allowed at Ronnie’s.

This was the third time I’d seen Caroline this year – the other two shows were at Cecil Sharp House (the home of English folk music) and at Latitude festival. Each time I review them I struggle to define their music. It’s rooted in folk, for sure, but the sound is deconstructed and reassembled, so it’s like nothing else you’ll hear. I went to the show with Shane last night. Afterwards we were thinking of descriptions. I came up with psychedelic folk meets avant-garde jazz; but I think I’ve just thought of something better. Cubist folk. Just as the art form takes an image, breaks it up and reassembles it, Caroline do something like that with music. Not in every song – IWR is a thing of simple beauty, like a medieval religious chant. Dark Blue, which ended the show, could be Mogwai. But then you have the staccato Skydiving onto the library roof – even the song title is Cubist!

I was pleased that the band played in the EartH upstairs theatre, where you can sit on the wooden tiers. Gets a bit uncomfortable after a while, but it gives you a chance to contemplate, to absorb, which is want you want with Caroline. This is engrossing music, best enjoyed in the dark.

The band released their debut self-titled album this year. It’s a superb piece of work – not overburdened with tunes, but constantly intriguing. The live shows are an extension of that, with the tunes elongated, stretched, embellished. Endlessly fascinating. And it’s evolving – it was noticeable that the two violinists are playing an ever more prominent part in proceedings, with Magdalena McLean also taking on some singing duties. There was some new material, including an embryonic piece in which twelve people were invited on stage, sat in a circle, all but one with an acoustic guitar, which they started to play as they picked up the chord sequence from one of the members of the band, Jasper Llewellyn. It went on a bit and didn’t develop much beyond a gentle chant; but it was a very Caroline thing to do. There’s a real inclusivity about the band, both within the ensemble and with the audience, even though they don’t do much talking. That said, one of the guitarists – Casper Hughes, I think – did briefly take on the role of spokesperson, expressing their gratitude for the year they’d had, the places they played. And this show, he said was the culmination of everything. That felt genuine and felt good. It was great to be there, to share in this celebration of music that challenges and enthrals. There really is nothing else like the music of Caroline. 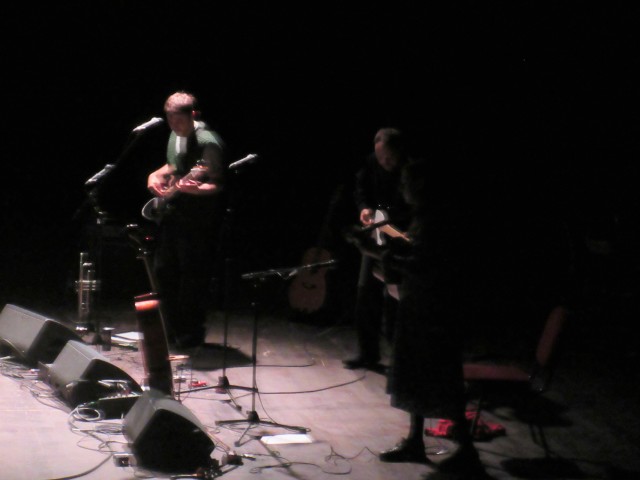 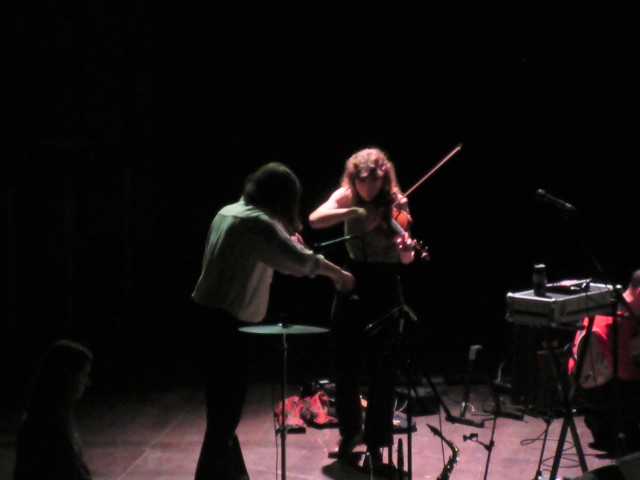 I'm blogging about the things I love: music, sport, culture, London, with some photos to illustrate aspects of our wonderful city. I’ve written a novel called “The Decision”, a futuristic political thriller, and first of a trilogy. I’m also the author of a book on music since the 1970s called “ I Was There - A Musical Journey” and a volume of poetry about youth, “Growin’ Up - Snapshots/ Fragments”. All available on Amazon and Kindle.
View all posts by John S →
This entry was posted in Music - concerts, lists, reflections and tagged Caroline, concerts, music, Ravi Coltrane, The Unthanks, VS Funk Soul Orchestra. Bookmark the permalink.