As I was watching Metallica, with Lou Reed, pulverise the Velvet Underground’s “White Light/White Heat” on Jools Holland last week, my thoughts turned to the album which might be the least known of Metallica’s, but which is actually my favourite.  Heresy for any true Metallica fan because it was an album of covers, the songs that inspired the band. It was called “Garage Inc” and it was a double CD. I first heard it in 1999 when a good friend, who I will call “Dave”, bought it in Oxford HMV so we could hear it at a weekend party. We could certainly hear it! Again and again.  When I first heard it, roaring in the background, my reaction was, Wow! This really rocks, what is it? I didn’t try that hard that night to find out, but the following morning I picked up the CD and figured it out. 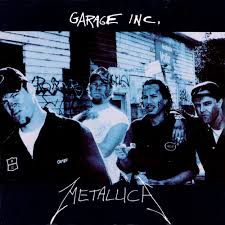 At that juncture I’d never been hugely into Metallica.  I’d had my metal phase in the mid -seventies, until punk came along in 1976 and blew everything apart. Ten minute songs about demons and wizards or hard lovin’ women lost their lustre at that point. And that was it for some time. I liked Metallica without knowing much about them.  “Enter Sandman” was a hit in 1991 and I checked that, but not much else.

So, I heard this rocking album and thought, I must buy this.  It was brilliant.  It was Metallica’s paean to the metal and punk music of the past which they loved.  But with their huge, scything riffs, and thrashing beats, they made the music their own.

Listen to their versions of Queen’s “Stone Cold Crazy” and Thin Lizzy’s “Whisky In The Jar. Not massively different to the originals  in structure (bearing in mind that “Whisky In The Jar” is originally an Irish folk song) but with Metallica’s piledriver riffs making them harder and harsher and faster. They go a bit soft and get out their acoustic guitars for  Lynyrd Skynyrd’s “Tuesday’s Gone” and it really works.  It’s their bit of light relief – and ours.  There’s not much let up on the album.

The whole album rocks, but my favourite sequence is the one that goes “Am I Evil?”, “Blitzkrieg”,  “Breadfan”.  The first is a song by a band called Diamond Head. It’s similar to Black Sabbath.  It starts with a thudding sequence of riffs, and then twirls in to a speedy machine gun  rhythm which again recalls Black Sabbath – “Children Of The Grave”, if you know about these things.  The lyrics are daft – My mother was a witch – but it’s just so brutal. Piledriving stuff. It’s not the heaviest sound I’ve encountered – that accolade goes to Slayer, whose “Reign In Blood “Album is so heavy – and fast – that listening to more than two tracks just does your head in. But “Am I Evil?” rocks very hard indeed.

“Blitzkrieg” is an interlude, a chugging metal riff which might even make you want to dance, in a leaping up and down sort of way. There’s a hint of Dutch prog rockers, Focus’s, “Hocus Pocus” in the riff.  And then it’s “Breadfan”, a song by Budgie, a Welsh three piece band, who did their best stuff in the mid seventies – I saw them at Leicester de Montfort Hall when I was still at school. It heads off at high speed, but Metallica insert an absolutely classic metal “slow bit” in the middle, a piercing guitar solo that takes the song to another level, before it succumbs to a chuntering riff and a return to the main theme. It’s a caricature, almost, of the genre. But a brilliant one. If you are laughing, it’s with, not at.

Every song on the album is a labour of love.  It’s uncompromising and relentless. One or two are best avoided in polite company.  I can’t listen to too many tracks before I start to feel pummelled.  Beaten up and left gasping. The riffs are like chainsaws.  But it has a seam of melody too, something that many Metallica originals lack, though there are brilliant exceptions like “The Day That Never Comes” (my all time Metallica favourite).  Tunes and riffs –  you can sing along while you play your air guitar!

What could be better?

I'm blogging about the things I love: music, sport, culture, London, with some photos to illustrate aspects of our wonderful city. I’ve written a novel called “The Decision”, a futuristic political thriller, and first of a trilogy. I’m also the author of a book on music since the 1970s called “ I Was There - A Musical Journey” and a volume of poetry about youth, “Growin’ Up - Snapshots/ Fragments”. All available on Amazon and Kindle.
View all posts by John S →
This entry was posted in Music - Have You Heard? and tagged Metallica, music. Bookmark the permalink.