Misty Thames – and where did the water go?

Cycling from Kew Bridge to Hammersmith today, I witnessed the battle between the fog – just a thin film of mist at two o’clock, but thickening later – and the sun, which only peeked out briefly today.

Only had my iPhone for a camera, but got one or two nice shots, especially as the sun set.

These first two are taken from Kew Bridge, facing east and west.

Heading towards Barnes Bridge, it seemed to glow in the light of the setting sun.

In Hammersmith, on the Upper Mall, I stopped as the sun shone red through the regathering mist.  It looked like an Impressionist painting and the second of the shots below, which is taken with the iPhone zoom, which reduces clarity, actually works rather well for that effect, I think. 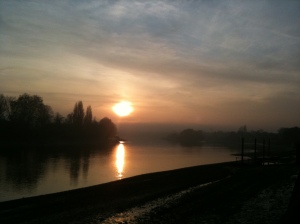 Just scrolling right, avoiding the full-on effect of the sun, the scene takes on a different hue.

The coming together of three elements – the mist, the setting sun and the river at low tide – created a scene of great beauty.  The gentle wonder of nature.

What happened to the water?

The tide is the tide. It goes in and out.  Always has done. But I’m still in awe of the changes the river undergoes as far inland as Hammersmith and Richmond.  Last weekend I took this shot at the western end of Chiswick Mall about half an hour before high tide that day. It was about 3.30pm. The water was beginning to encroach on the street. I might have been riding through water half an hour later. The second shot was taken at about the same time today, but this time it was low tide.  Which for this section of river means no water at all! See the red rings sitting on the crate. At high tide they float in the water and the crates are nowhere to be seen. It’s the same black boat in both shots.

I'm blogging about the things I love: music, sport, culture, London, with some photos to illustrate aspects of our wonderful city. I’ve written a novel called “The Decision”, a futuristic political thriller, and first of a trilogy. I’m also the author of a book on music since the 1970s called “ I Was There - A Musical Journey” and a volume of poetry about youth, “Growin’ Up - Snapshots/ Fragments”. All available on Amazon and Kindle.
View all posts by John S →
This entry was posted in London, Photos and tagged local, nature, Photography, photos, Thames. Bookmark the permalink.

5 Responses to Misty Thames – and where did the water go?