London, like most cities, started small then grew… and grew, and grew. My part of the city, Ealing,  was a rural village until the 19th century, when the arrival of the railway station brought with it surburban development. In the Victorian era, Ealing had become the “Queen of the Surburbs”. Today it is a vibrant, multi-cultural community that feels like London, but still has space to breathe, with its parks and proximity to the River Thames and the Grand Union canal. The four great westbound roads out of London border or cut through it.  To the north, the A40, which becomes the M40, heading to Oxford and Birmingham. To the south, the A4, the original Great West Road, with the M4 hovering over it, destination Bristol and then into Wales. Through the middle runs the Uxbridge Road, connecting Uxbridge (obviously) with Shepherd’s Bush.

In the first three decades there was massive expansion of building in London and Ealing’s architecture today is still shaped strongly by that era. And the 1920s and 30s were the era of Art Deco. Naturally the developments along those main arteries, with all the commercial development, reflected the architectural trends.

I’ve always like the Art Deco style, its simple lines combined with a certain grandeur and the odd quirk, a flash of fancy detail. Those long windows which must let so much light into the inner spaces.  A style which signified art meeting the machine age.  Functional, but imaginative, challenging.

Along each of the main roads, there are survivors from the Art Deco age. Some of the buildings have seen better days, but many are still thriving.  They provide a link with an age of energy and creativity, as well as anxiety, sandwiched between the two world wars and subject to the Great Depression.  There is a defiance about Art Deco architecture, setting its face against the grimmest of times.

I can’t give Ealing all the credit for what follows in pictures.  The A4, with its “Golden Mile” of Art Deco, is actually in Brentford, to the south, bordering the Thames. It’s a little nondescript, Brentford, but coming up in the world with some of the developments around the juncture of the Thames and the Grand Union Canal. The future is bright.

I’ll start the photos in the north and work south. Double click for full size images, and if you’d like to see the whole collection, click on the Flickr link on the sidebar to the right.

The Piccadilly Line underground stations to the west of Hammersmith were constructed in the early 30s, and so, not surprisingly there is an Art Deco influence.  This is Park Royal station, next to the A40.

And some nearby shops, with a striking canopy.

Is this Vanguard building Art Deco? Not sure, but it has the quirks. 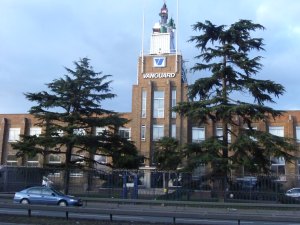 The Hoover Building on the A40 is the classic Art Deco structure. It opened in 1933 and was a vacuum cleaner factory. And stayed that way until the early 80s, when it closed. It re-opened in the 1990s, as a Tesco supermarket and offices.  I have to say though, a very fine job was done in restoring it to former glories. 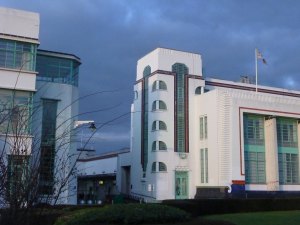 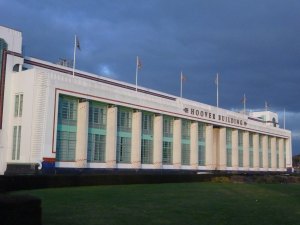 Windows are everything in Art Deco. 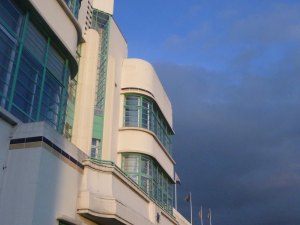 At the back it’s very green. 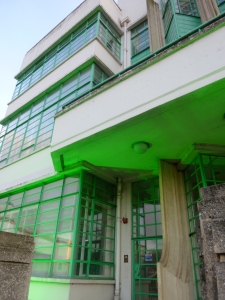 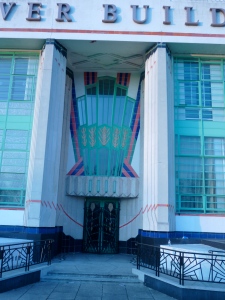 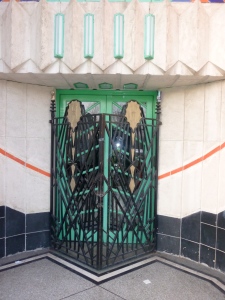 Before we move to the Uxbridge Road, here are a couple of my local tube station, Northfields, again part of that 30s extension.

And the interior.  Not that I feel this way on my way into work, but it almost feels like a church in this photo. It’s the window… and those lights. 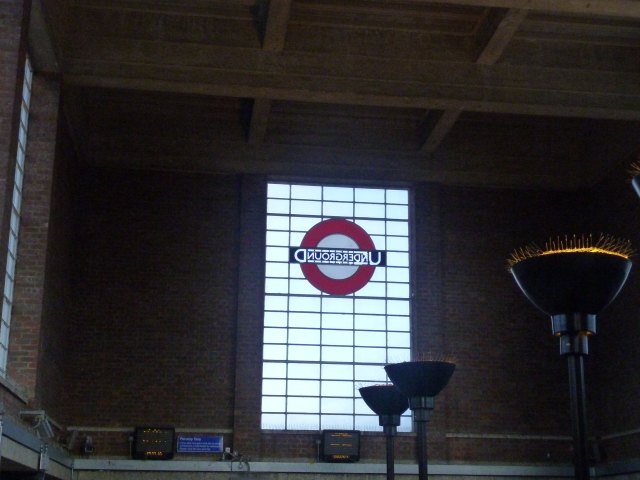 So the Uxbridge Road, first stop West Ealing.  Definitely seen better days. Pound shops dominate these days.  The Art Deco building used to house a Woolworths, when I first came to the area in the 80s.

And there is this first floor delight over the local sports shop – a proper sports shop, Arnolds.

Moving east along the Uxbridge Road, to more prosperous climes, we find Longfield House, a mixture of offices and apartments. 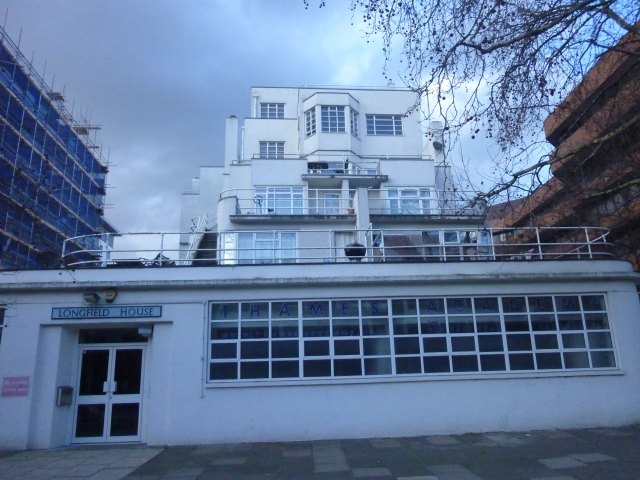 Someone’s got the barbecue out!

And so onto the Golden Mile! The first bit is a bit grim, all concrete, Junction 2 of the M4 nearby. But there is a residential development owned by Barratts hanging on in there. Called Wallis House, built late 30s. 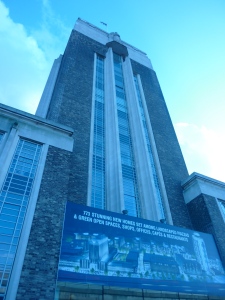 The JC Decaux building was originally a Curry’s electrical goods factory, built in 1936. It’s got some classically simple lines, this one. 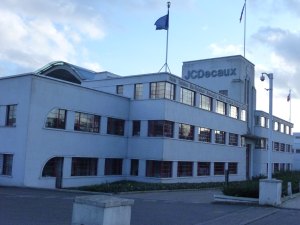 I like the doorway of this Carillion building. I think it’s called West Link House now. It started as a fire extinguisher factory in 1929-30. 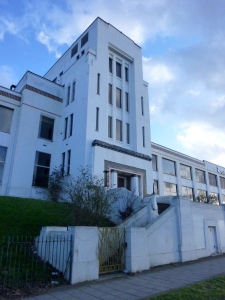 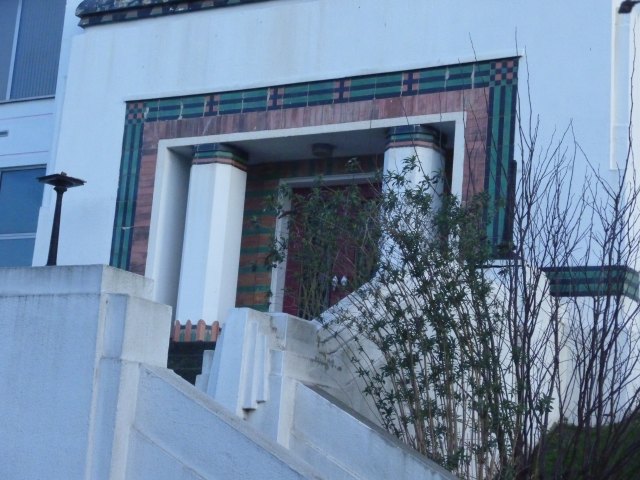 Syon Clinic started as Coty Cosmetics in 1932.  We see a trend here in all of these buildings.  From making things to providing services: residential, offices, health.

And finally to Gillette Corner. The main Gillette building housed the European HQ of the razor company from the mid 30s .  Magnificent, but no longer in use. How can this be? Apparently there are plans to turn it into a hotel and business park. It won’t be a Tesco, because Tesco is already next door!

These first two shots are of outlying buildings. I think there is still a Nat West Bank branch there.  It’ s strange location. It’s the A4, not a high street. 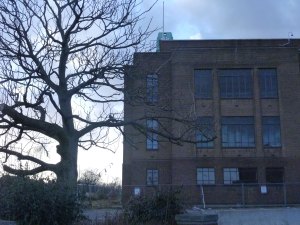 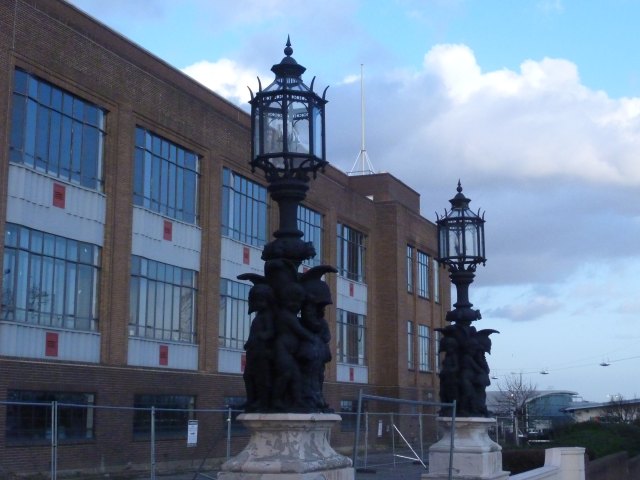 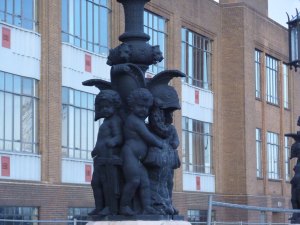 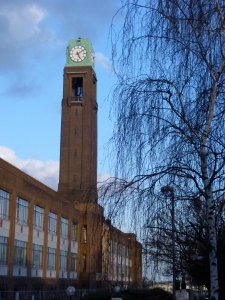 And just a reminder of where we are!

I have hopes for the Gillette Building, as the experience of most of the other At Deco wonders in this collection suggests that when you have a striking building, someone will think of a use for it, even when the original purpose has receded.  Fingers crossed!

I'm blogging about the things I love: music, sport, culture, London, with some photos to illustrate aspects of our wonderful city. I’ve written a novel called “The Decision”, a futuristic political thriller, and first of a trilogy. I’m also the author of a book on music since the 1970s called “ I Was There - A Musical Journey” and a volume of poetry about youth, “Growin’ Up - Snapshots/ Fragments”. All available on Amazon and Kindle.
View all posts by John S →
This entry was posted in London, Photos and tagged Architecture, Art Deco, Brentford, Ealing, local, London, Photography, photos. Bookmark the permalink.