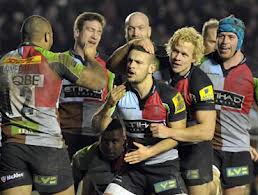 With the Six Nations in full flow, club rugby has to make do. If you are a top club – like Harlequins – you lose some of your best players for a couple of months. The ones who are first picks for the fifteen you lose altogether. In Quins’ case, Chris Robshaw, Mike Brown and Joe Marler. The ones who are in the squads but not playing all the time might be let back to the clubs in the weekends where there isn’t a round of internationals.

This weekend was one of those. It coincided with a top of table Premiership clash between Quins and Leicester. Quins got scrum half Danny Care back. Leicester welcomed fly half Toby Flood, No8 Thom Waldrom and talisman Manu Tuilagi back into the ranks.

We went to the Stoop with some trepidation. The previous weekend the boys had lost at home to Wasps, 16-17. Should have won, but Nick Evans had an off day with the boot and the sheer pace of the Wasps wide men – Christian Wade and Tom Varndell – cut us up a few times. Nev threw a pass for an intercept for Varndell too. We never clawed that seven point lead back.

And now Leicester, who’d taken over at the top of the table after that Quins loss. It was always going to be tough: now it seemed tougher.

But Quins started the game well. Taking the game to Leicester, trying to punch holes through their defence. Throughout the match that was a big ask. The Leicester defence is awesome, a brick wall, aided by the fact that the referees don’t seem to penalise them for offside. (For those unfamiliar with the rules, offside is when defending players drift ahead of where the ball happens to be, otherwise known as “the gain line”. If they do that they get their tackles in earlier than they should be able to do)

But after six minutes, Nick Easter – the mighty Nick Easter – threw a long pass, which was intercepted by Toby Flood (probably offside) and he had the pace to go all the way for a try. 0-7 after the conversion.

For the rest of the first half Quins stayed on top of the play and clawed back points with penalties from Ben Botica, who kicked flawlessly – Nev had withdrawn from the game at the last. But near the end of the half, after some technical infringement at a scrum which led to a Leicester penalty, from which they won the ensuing line out, Leicester scored another try.  Good pressure, can’t deny that. 18-12 to Leicester at half time.

We weren’t feeling too optimistic about Quins getting back, but they came out in the second half with real attacking intent. And then the breakthrough moment…  Leicester infringed near the half way line, Danny Care took a tap and sprinted. Past one then another, at high speed. Checked to see if anyone was better placed than him. Answer, no, so he dummied and swerved and raced through for an amazing solo try. Converted by Botica to put Quins into a 19-18 lead. Ben then converted another penalty to make it 22-18.

Quins then scored another try after a brilliant move with Ben Botica at the centre of it. But it was disallowed after a long TV adjudication, apparently because Matt Hopper obstructed a Leicester player who may have made a tackle. Er, well, maybe…

So close to finishing off the game!  Inevitably Toby Flood got a penalty back for Leicester. 22-21. Ugh!

It was tense! The trouble with rugby is that a team can be on top, as Quins were, but it is so easy to give away a penalty. The quirks of a referee can determine a game. And Wayne Barnes, ref on the day, is as quirky as they come.  Quins fans are convinced that Barnes is against us. But on the day he was even-handed. After the game, the Leicester manager claimed he’d had it in for them. So I guess he got the balance right – both sides hated him!

In those final minutes, after some more forward pressure, Quins got another penalty and Ben put it over for a 25-21 lead. It still felt tense. Leicester are renowned for late comebacks. They are the Man Utd of rugby. But it all went right for Quins at the last. Some more great forward play earned them a penalty. Ben kicked to touch, Quins won the line out and hoofed it into touch. Game over!

So close. Two really good teams slugging it out. Both weakened by the international call ups, but still strong. Both with immense defences. Only three tries: one a freak error (by Easter), one superbly fashioned (Leicester), and then the moment of individual inspiration – Danny boy! He was razor sharp all game, probably benefiting from the England training regime and the competition with Ben Youngs for the England scrum half slot. But that try was just one of those moments of instinctive genius. One of those moments we live for when we go to the games.

Really important for Quins to win this one after losing to Wasps. Puts us top of the Premiership again and feeling we can beat anyone. Because Leicester, to their credit, are always the acid test.

Danny Care got the Man of the Match award, and no-one will quibble with that. But really it was a game when every player was in with a shout. Such a close and intense game, that everyone had to be on their mettle. Danny won the game with that moment of brilliance, but Ben Botica kicked every penalty and conversion offered to him and everyone else did the business too. A magnificent team performance.

I'm blogging about the things I love: music, sport, culture, London, with some photos to illustrate aspects of our wonderful city. I’ve written a novel called “The Decision”, a futuristic political thriller, and first of a trilogy. I’m also the author of a book on music since the 1970s called “ I Was There - A Musical Journey” and a volume of poetry about youth, “Growin’ Up - Snapshots/ Fragments”. All available on Amazon and Kindle.
View all posts by John S →
This entry was posted in Sportsthoughts and tagged Ben Botica, Danny Care, Harlequins, Leicester Tigers, rugby, sports. Bookmark the permalink.