On Saturday, my friend Jon and I went up to Hackney in East London, Victoria Park to be precise, for the Field Day music festival. It’s the first time either of us had been, although it has been well-established for many years now.  It was just a one day festival this year – it used to stretch across the weekend, I think. The music is quite a mixture – with a strong dance and rap element, as well as a bit of indie and folk. It’s for 18s and over, and was heavily the 18-35 age group – I felt much more of an outlier than at Latitude or End of the Road. But hey, who cares, we’re all there for the music.

3 June will, sadly, be etched on our memories now as the day of the latest hideous terrorist attacks, this time on London Bridge and around Borough Market. Places I know and love. We got to hear about it just as we were leaving, at 11pm. Immediately the euphoria vanished, to be replaced by a familiar feeling of bewilderment and sickness. How can this be? I did wonder whether I should be writing about something which, on one level, is so trivial, in the circumstances. But we have to continue celebrating life, and this is what I have always done in this blog. So, this is my celebration of a wonderful day, until we got that news.

It was a beautiful sunny day for the most part. Got a bit chilly late on, but the sunshine meant all you ever had to do, if there was a time when no-one was on that you were really keen to see, was to settle down on the grass by one of the stages or tents, with a pint, and just chill. Blissful. My highlights of the day were drawn from the indie side of the bill – Julia Jacklin, Whitney, Slowdive and Thee Oh Sees, but before I come on to them I just want to say a little about the dance and electronica. This was probably the most popular attraction. There were seven stages, clustered around the two ends of the space allocated to the festival. The western end was mainly dance, and featured the enormous “Barn”. An extraordinary structure, as you can see from these photos, from outside, early on, and inside, only at about 2.15, when it was already packed, when a Berlin techno band called Moderat were on. They were pretty good, by the way.

In the evening we tried to see Flying Lotus on the “Resident Advisor” stage. Only 8 o’clock, but it was rammed, and we stood outside for a bit. That got boring, and we returned to our indie roots, so missed Aphex Twin in the Barn. Pretty amazing by all accounts, but it clashed with Slowdive anyway, and I really wanted to see them.

We got there quite early – about 12.45 – and thought we might be the only people watching Manuela, an indie band I’d heard recently on Marc Riley, at one point. But a few more turned up!

They played some sharp rhythms and had some interesting lyrics. I associated them a bit with a few  other bands I like, like Teleman and Blue House. I’ll be checking out their music. We then caught the end of Aine Cahill, playing a Irish folk/pop mix. Lovely singing and music, maybe erring a little on the bland side for me, and I thought Aine could wave her hands around a bit less. After that it was the outrageous punk meets Adam Ants and Fat White Family of HMLTD. They’re great live performers. Looked like a cross between Goth and the New Romantics. I think they could wow the festivals this summer. Probably wouldn’t buy the music, but a terrific show. Made me laugh.

Then what I was there for. Julia Jacklin. Got to the Shackleton Arms tent quite early and had a place quite near the front. Julia sang her familiar set of wonderful, spare, folky and poppy Aussie Americana songs. Maybe a bit more subdued than when I last saw her at her own show at the Scala, but still a joy, especially when she played “Motherland” and “Don’t Let the Kids Win” in sequence. 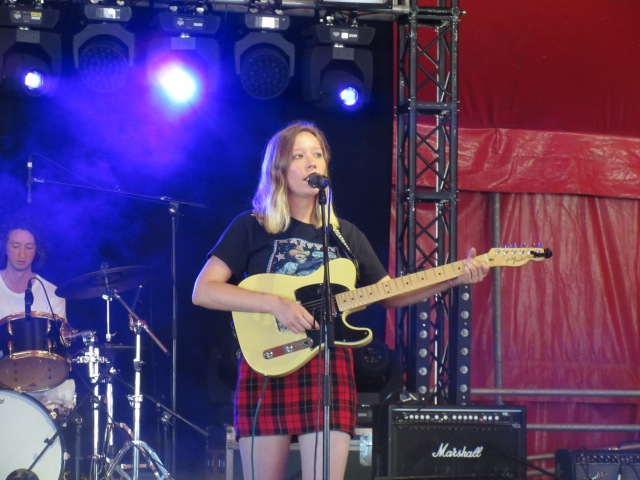 After that, it was London rapper, Loyle Carner, in the sunshine, on the Eat Your Own Ears stage, same as Manuela. The main outdoor stage. He bounced on stage in a Juventus shirt (European Champions final that night) and kept bouncing. A lot of his music is about the lyrics. They were hard to decipher, and the beats and delivery got a bit samey, so we moved on after about 20 minutes. No disrespect – a good artist, and went down really well. Just not something I needed to watch for an hour. 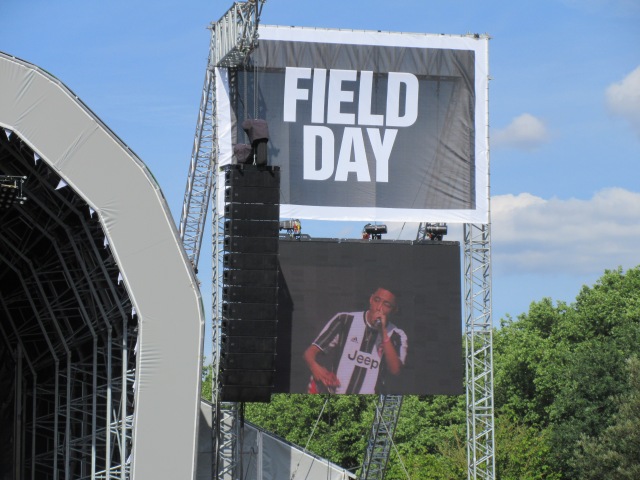 We then flitted around a bit. Tried a bit of Jon Hopkins’ DJ set in the Barn – not quite as good as I would have hoped. The best dance thing was an outdoor place called the Bandstand, where a succession of DJs were playing what were probably quite familiar tracks and a lot of people were just dancing. 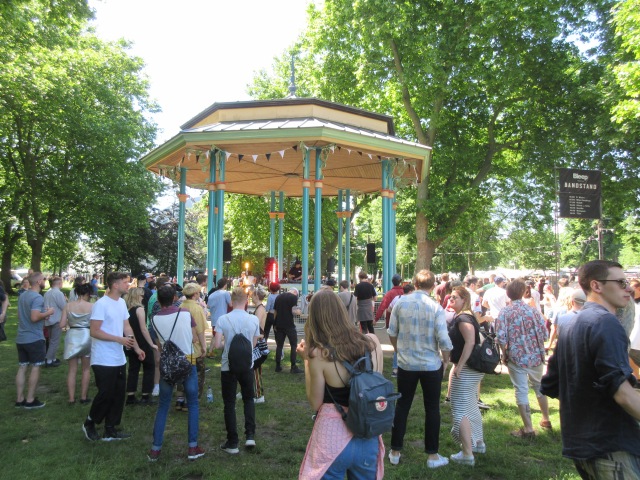 We then settled in the sun by Eat Your Own Ears again and enjoyed Rae Morris. I wasn’t familiar with her music. It’s poppy electro, and was really enjoyable. She could have been American, but is actually from Blackpool. Respect!

We tried Arab Strap next. Singer Aidan Moffat roamed around like an angry bear, while all sorts of noise was going on. There could have been times when I really liked this, but I was going through a slight energy dip and didn’t really get too much from it.

Next though, another highlight. Back to Eat Your Own Ears for Whitney. Saw them with Julia Jacklin at Koko last year. Uplifting music, with a strong early Van Morrison influence. A really tight band, with a sense that they are about to fall apart, because of singer/drummer Julien Ehrlich. But they never do, and he is brilliant, notwithstanding the fact he necks red wine (and Red Bull this time) all the way through. Ending with the wonderful “No Woman”, of course. An anthem.

After the brief attempt to see Flying Lotus, we headed back to the Crack tent for Slowdive. Essentially the indie headliners. They were a “shoegaze” band in the late 80s/early 90s, but passed me by for some reason. But they have reformed and released a new album, just called “Slowdive”. I bought it, and it’s really good. I love the big, shimmering guitars and the harmonies. They bring to mind Sigur Ros, Cocteau Twins and even, for me, Espers. But some of these bands might have been influenced by them, first time around. They were superb, and there was a real atmosphere, enhanced by all the lights and dry ice. I’d say, for me, it was the best show of the day. They are on at the Roundhouse in October, and I will have to try to catch them there. In the meantime, I’ll be exploring the back catalogue. 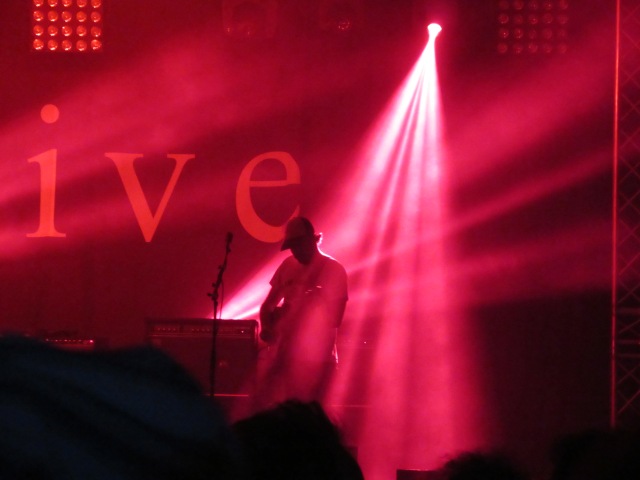 And then, well, Thee Oh Sees. Totally awesome at End of the Road, a revelation. Visceral rock’n’roll.  And same again really. No surprises, just the most amazing energy. How the two drummers keep going and keep time together for an hour I don’t know. It’s primal stuff. On record, there’s quite a lot of psychedelia, which doesn’t really rock that hard. But live… aaargh! Great end to a brilliant festival. I can never get a clear photo of main man John Dwyer, because he is going crazy most of the time. So here’s the blurry one!

And with the band, who all look quite ordinary, though they ROCK!

Yeah. We love rock’n’roll. We love music. We love togetherness. We love celebration. We love London. No terrorists will ever change that.

I'm blogging about the things I love: music, sport, culture, London, with some photos to illustrate aspects of our wonderful city. I’ve written a novel called “The Decision”, a futuristic political thriller, and first of a trilogy. I’m also the author of a book on music since the 1970s called “ I Was There - A Musical Journey” and a volume of poetry about youth, “Growin’ Up - Snapshots/ Fragments”. All available on Amazon and Kindle.
View all posts by John S →
This entry was posted in London, Music - concerts, lists, reflections and tagged Aine Cahill, Field Day, HMLTD, Julia Jacklin, London, Loyle Carner, Manuela, Moderat, music, Rae Morris, Slowdive, Thee Oh Sees, Victoria Park Hackney, Whitney. Bookmark the permalink.