A few days at the Edinburgh Festival, August 2017

My wife, Kath,  and I have just spent a few days at Edinburgh Festival. It’s the first time I’ve been to the festival since 1981, when I went up for a week and slept on a friend’s floor, while going to all sorts of weird and wonderful things day and night. I can’t believe I’ve never gone up again, specifically for the festival – I’ve been a few times on business, and once taking my son Kieran to have a look around.  But anyway, here we were these last few days, and was it good? You bet!

The whole event is so vibrant, so brimming with interesting things to do and see. A fantastic experience. I’d recommend it to anyone. And Edinburgh is such a beautiful, grand city. I’m not sure there is another city in the UK with such a dramatic setting. There are a few photos at the end of this blog – quite random, I only had my iPhone with me. They might give you a sense, if you’ve never been there. But only a sense. You have to see it for real.

The Festival is a cornucopia of the arts. You can only scratch the surface in three days (spread over four) as we had. In that time we saw 12 shows and went to 2 galleries. And lots of bars! A great experience.

Here are just a few highlights:

Comedy. More of this on offer than anything else. We saw a couple of big hitters, Alexi Sayle and Mark Thomas, who were trenchant, left wing and very funny. I was surprised how much Alexi dissed some of the new stars, who do their arena tours. Too middle class. Touch of envy? Mark used predictions from the audience to improvise, as well as weaving in tales about his father. Glaswegian comedian, Scott Gibson, was hard-hitting and moving about his relationship with his father too. Alice Marshall went for the jugular in the relationship between women and men. And Luke Rollason was just bizarrely funny (and serious) in his “Planet Earth III”. In essence, he used mime plus the odd noise to depict animals in the cheap version of the Attenborough classic, as the planet went to pot. I’ll never forget his angler fish in the dark, where he wore an angelpoise lamp on his head which he switched on and off while uttering daft noises and staring madly. Or his pregnant seahorse. You have to see it to understand!

Music. We saw three things. A great jazz/country session at the Jazz Bar by Lorna Reid, a Scottish singer. I liked it enough to buy three of her CDs! A beautiful session at Saturday lunchtime called “A Case of You – The Songs of Joni Mitchell” sung and played by an Aussie called Deborah Brennan and her two band members. You could lose yourself in this. And two sisters, calling themselves Flo and Jo, who sang observational songs about our lives today. Humorous, daft, piercing. And some very impressive wordplay and harmonies. Really engaging.

Drama. Just the one performance, a play by a group called the Theatre Department (of where I know not) called “Carravagio: Between the Darkness”. An exploration of the great artist’s final years on the run, after he killed a gangster in Rome, who wanted money back. An intense depiction of his passion, his rage, his rivalry with the artist Carracci, who was happier to paint what the punters wanted. Blimey, bang in the middle of Saturday afternoon in a hotel in the New Town! That’s Edinburgh Festival for you, if you want it.

Poetry and the spoken word. We saw Carol Ann Duffy, Poet Laureate, accompanied by John Sampson, who played an array of wind instruments to accompany her powerful, touching, funny, trenchant poems. The opener, a reflection on the First World War was truly moving. Poet Luke Wright, someone I knew from Latitude, performed an amazing one hour monologue called “Frankie Vah”. The theme was the 1980s, the conflicts in that era, and Frankie’s journey as a punk poet and as a person. It was intense, powerful. The music enhanced the emotion. One of the highlights, for me. Gentler, but poignant, was John Osborne’s “Circling the Radio Times”, John’s story about his grandfather and his relationship with him. I saw a bit of this at Latitude. It was great to hear the whole thing. A lovely reflection on ordinary life.

Art. Our hotel was on East Market Street, pretty central. Just down the road was the City Art Centre. It had a fascinating exhibition on three floors called “Edinburgh Alphabet: An A-Z of the City’s Collections”. It pulled together art and artefacts from around Edinburgh’s galleries, to tell the tale of Edinburgh. Loved it! The picture that really grabbed me was “The Entry of George IV into Edinburgh from the Calton Hill ” by John Wilson, painted in 1822. It made me want to go up Calton Hill, which we did on the sunny Sunday morning. I loved some of the modern photographs too. We spent a bit of time in the Scottish National Gallery as well. So much to see there, and we only had time to see a small amount, but we refreshed our memories of great Renaissance and Dutch artists. Including some Carracci!

Food and drink. Well, you can certainly drink in Edinburgh! Saturday night was pretty wild, especially in Cowgate. I liked all the open air tents, especially down in the University area. Some great local IPAs there. The one I particularly liked was Drygate Gladeye, one of a number of Drygate beers, which was in a space by the “Gilded Balloon” complex. We had a nice, slightly quieter place near our hotel too, called the Pitt (I think). Again there was an open air space, as well as an indoor cocktail place and an art exhibition. The weather was nice enough to hang out there a couple of nights before we went back to the hotel. And, although we mainly snacked, and had great breakfast bacon rolls at Baba Budan, under the railway arches on East Market Street, we did go to one excellent restaurant/bar, Bon Vivant, on Thistle Street. That’s on the New Town side. Recommended by my friend Annabelle, who lived in Edinburgh for a few years. Quality food and a really interesting wine list. Noisy, because it’s essentially a pub with a restaurant area, and a lot of people turn up, but well worth a visit.

A brilliant few days. Here are a few photos to finish off with.

The Scott Monument you cannot ignore. 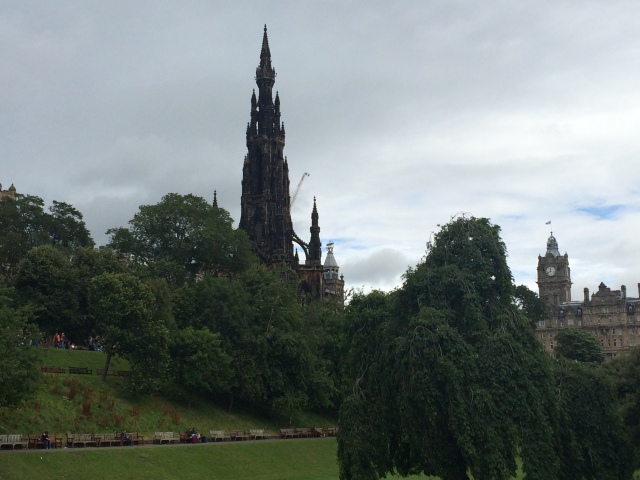 My favourite tent, down by the Gilded Balloon. This was Friday afternoon. On Saturday evening it was rammed.

A wobbly view, taken through a frosted window in the City Art Centre, looking over Waverley Station to Princes Street. 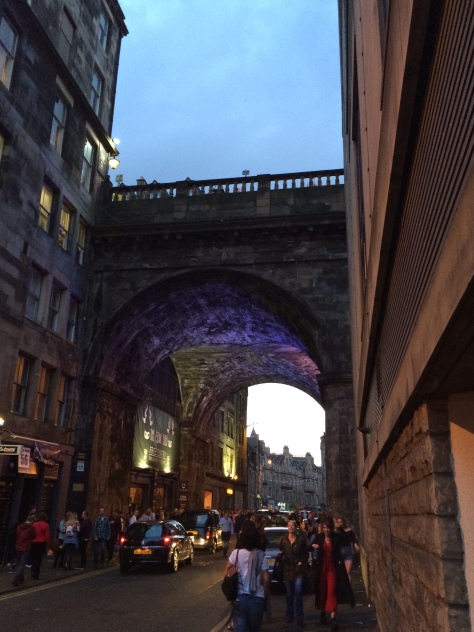 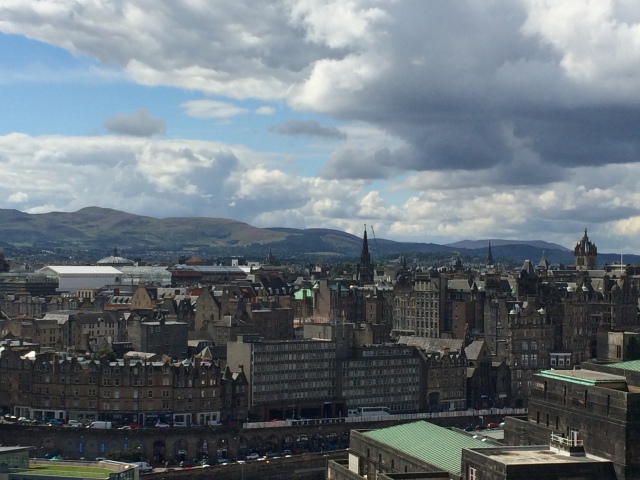 I'm blogging about the things I love: music, sport, culture, London, with some photos to illustrate aspects of our wonderful city. I’ve written a novel called “The Decision”, a futuristic political thriller, and first of a trilogy. I’m also the author of a book on music since the 1970s called “ I Was There - A Musical Journey” and a volume of poetry about youth, “Growin’ Up - Snapshots/ Fragments”. All available on Amazon and Kindle.
View all posts by John S →
This entry was posted in Art, books, theatre, cinema, Music - concerts, lists, reflections and tagged Art, comedy, Edinburgh, Edinburgh fringe, music, Photography, Poetry. Bookmark the permalink.

7 Responses to A few days at the Edinburgh Festival, August 2017