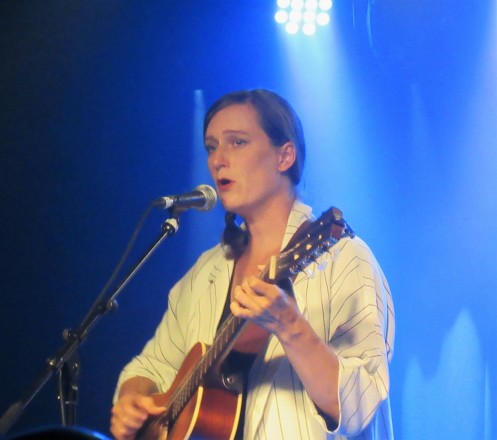 On Wednesday I went to see Laura Gibson at the Oslo, Hackney. A great place for a show. A good space upstairs and an excellent bar downstairs, which serves one of my favourite IPAs, Beavertown Gamma Ray.

I first saw and heard Laura Gibson on the main, Woods Stage at End of the Road in 2016. I liked her music, even though it was a bit lost in the open air space of the big stage. I bought her latest album, “Empire Builder”, a lovely collection of urban folk songs, if there is such a genre. Laura has a beautiful, plaintive voice, with a bit of that twang you get in a lot of modern singer songwriters. And, live, a hint of echo from the sound desk.

Two songs quickly became my favourites: “Louis” and “Caldera, Oregon”. I guess they epitomised what I liked most about Laura Gibson. Wistful but also uplifting. Happy memories as well as sadness. I rather neglected the rest of the album as those went on my justgoodsongs playlist, to be played again and again. And so, on Wednesday evening, I was trying to mug up again as I took the Victoria Line up to Highbury and Islington, and the Overground to Hackney Central. Oslo is close that station – in fact, I think the building may once have been the station entrance.

Laura was on a double bill with Karl Blau, a respected country artist, but came on before him. Had to give his show a miss tonight, to get home at a sensible hour, for the next day.  She played for an hour, mostly songs from “Empire Builder” (which was good!) but with a few new pieces too, which sounded promising. She’s in the middle of recording a new album. She also brought on a couple of guests. First, a South African friend who played the viola alongside two tunes, the album opener, “The Cause” and a lovely song called “The Search for Dark Lake”. Then Karl Blau’s steel guitar player came on to accompany Laura on “Two Kids”.

Laura herself played a small acoustic guitar, mostly plucking the strings to give the tunes a rich bass sound with forays onto the higher strings. When the viola and steel guitar were in play, she chopped out the rhythms in accompaniment.

“Empire Builder”, the song, was a highlight. Laura pointed out that the title was the name of a train in the US, not a state of mind. That makes sense. A lot of Laura’s songs feel like they are about travelling, the journey through life, searching. That was a theme too, when I was in Edinburgh last weekend, and saw Deborah Brennan singing the songs of Joni Mitchell.

And the final song was “Louis”. Of course it was! Relief – I thought for a while I wasn’t going to get either of my favourites.

I always enjoy shows when the songs are stripped down to their essence, as they were yesterday. For the most part, it was just Laura and her guitar. Brings out the beauty of the melodies, and Laura Gibson has some very beautiful melodies.

Here’s a video of “Louis”, which hopefully gives you a sense of what I’m talking about.

Catch one of her shows if you can, and listen to “Empire Builder”!

I'm blogging about the things I love: music, sport, culture, London, with some photos to illustrate aspects of our wonderful city. I’ve written a novel called “The Decision”, a futuristic political thriller, and first of a trilogy. I’m also the author of a book on music since the 1970s called “ I Was There - A Musical Journey” and a volume of poetry about youth, “Growin’ Up - Snapshots/ Fragments”. All available on Amazon and Kindle.
View all posts by John S →
This entry was posted in Music - concerts, lists, reflections and tagged concerts, Laura Gibson, music, Oslo Hackney. Bookmark the permalink.