The British Isles caught the late throes of Hurricane Ophelia today. Ireland got the full force. London, tucked away in England’s south east corner, escaped the worst, but still had a very windy day and some strange skies. They’ve been widely reported – the unusually red glow of the sun to the fore. This, apparently, was due to dust from the Sahara, thrown in our direction by the storm.

There was a weird feeling in the atmosphere this afternoon. It was grey and strangely dark for the time of day, but the grey felt heavy, with a hint of pink and yellow. It was that Macbeth feeling – all feels unnatural. It was the talk of the office. I walked out of the office; it was the talk in the lift as I came back in. An American colleague said it was like when they were waiting for a tornado. That didn’t happen; but for us, with our rather moderate weather, this was a strange day.

I  took a few photos outside with my iPhone 5S. They all looked a bit standard grey, which was not what the eye was transmitting. I’ve slightly enhanced them to bring them closer to what I was seeing. 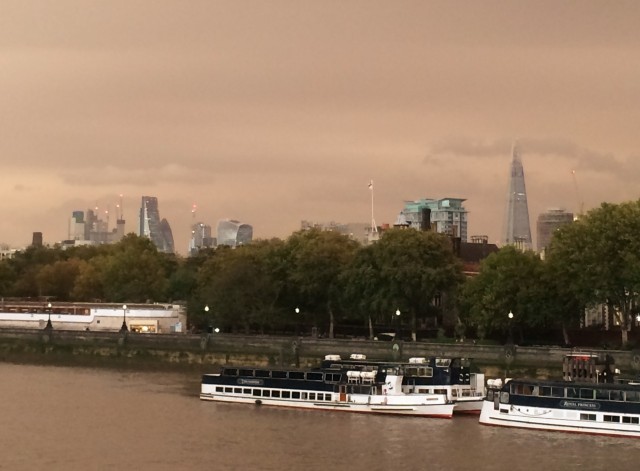 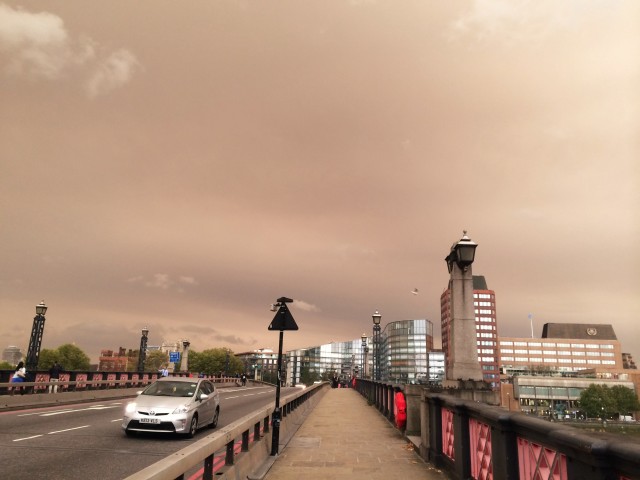 I'm blogging about the things I love: music, sport, culture, London, with some photos to illustrate aspects of our wonderful city. I’ve written a novel called “The Decision”, a futuristic political thriller, and first of a trilogy. I’m also the author of a book on music since the 1970s called “ I Was There - A Musical Journey” and a volume of poetry about youth, “Growin’ Up - Snapshots/ Fragments”. All available on Amazon and Kindle.
View all posts by John S →
This entry was posted in Photos - lovelondonscenes and tagged Hurricane Ophelia, Lambeth Bridge, London, Photography, photos, River Thames. Bookmark the permalink.