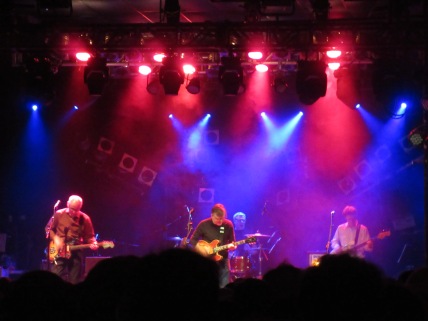 On Wednesday I went with my friend Dave to see Teenage Fanclub at the Electric Ballroom in Camden. The band are doing a tour at the moment where they play three gigs covering the span of their albums over the years. For me the must-see concert was number two, which covered what I think most fans will agree was their peak musically: the albums “Grand Prix” and “Songs from Northern Britain”, released in 1995 and 1997 respectively. It was a hot ticket – sold out very quickly. We got lucky.

“Grand Prix” is an album I particularly like. In fact it has grown in my appreciation over the years, and would probably make my top twenty of all time these days. It’s not that easy to get into that! I wrote a bit about the album in “I Was There – A Musical Journey” of course. And “Songs from Northern Britain” got a look-in too. Since I wrote this, I think I’ve got to like that album more and more.

Anyway, this is what I wrote about the two albums:

“Grand Prix” is one of the great indie albums. Or power pop, or mid-tempo, minor key guitar rock. It is the great Teenage Fanclub album. It takes all their good qualities – the driving riffs, the searing guitar solos, the great harmonies, the tunes – and hones them to perfection.  It’s one of the albums that found its way onto a cassette for the car and so I’ve listened to it endlessly while driving. It is perfect for that, like I’ve said about one or two others. Mid-tempo, but not bland. A real feel-good sound, even if some of the lyrics are bitter. Totally uplifting. Some of the best guitars ever. I really love this album.

The album starts with a classic jangling, Byrds-style singalong, “About You”. But then it shifts a gear, with “Sparky’s Dream”, one of the best of the best.  A twanging guitar, and then lift off.  Though not quite for the protagonist, who takes a wrong direction from a shooting star!

A searing riff, harmonies that reminded me a bit of the sixties Who. Some wistful, what-might-have-been lyrics. A great pop song.

“Mellow Doubt” eases the pace for a moment – a country-tinged tale of regret – before the awesome “Don’t Look Back” ups the riff factor, and the plaintive vocals, and the harmonies, for the most uplifting moment of the album. There’s no doubt that Teenage Fanclub have that thing called celtic soul. And Gerard Love, maybe most of all – he leads on “Sparky’s Dream” and “Don’t Look Back”, his voice fragile and wistful, amid the chiming guitars.

“Verisimilitude” is a downbeat but insidious interlude, all Elvis Costello cynicism and menace. Reminds me of “Green Shirt” a bit. It’s the timeout before maybe the best song of all, “Neil Jung”. Of course the title is a pun, maybe a double one.  (There’s a bit of psychology in there). It’s another Elvis Costello-style bitter take on the transience of relationships. It’s lifted by the melody – Norman Blake on vocals – and the magnificent, singing, guitar throughout, ending with a supreme solo in the style of… who else?

The guitar hero moment of the album, no doubt…

That front six was so good that it took me a while really to get into the rest of the album, but there are some very fine songs at the back. A rich variety, the Fanclub songsmiths at their most inspired. “Discolite” is classic surf punk; “Going Places” shimmers beautifully; “Say No” could have been on The Beatles’ “White Album”. And on it goes – one of the best nineties pop albums. It kind of got lost in all the hype about Britpop, which, strangely, Teenage Fanclub were never considered part of.  I guess it was a rather grown-up pop. You’d find it in the rock section of the record shop, rather than pop.

So “Grand Prix” is still something of a hidden treasure. It didn’t lead to an outpouring of Teenage Fanclub-style bands. It didn’t create a genre. It’s just there to be enjoyed for its own sake, in a place where so many of the best pop and rock sounds of the previous twenty years bumped into each other and came out winners.

“Songs from Northern Britain”, the follow up album in 1997, was more of same. Not quite as distinctive as the collection on “Grand Prix”, although the opening track, “Start Again”, would have held its own. The closing guitar solo was up there with the one on “Neil Jung”. “I Don’t want Control of You” jogged the memories of Badfinger, from the early seventies. I liked the irony in the album title: the breezy sounds and harmonies sounded more like they’d come from sunny California than cloudy Scotland. I read somewhere that some people regard it as Teenage Fanclub’s masterpiece. I have to say I’ve listened to it more in the last few days, as I’ve written this piece, than I ever did when I bought it, and my appreciation has grown. It’s an album with depth. But it’s destined to be in the if you like “Grand Prix”, try this… category. Vying with “Bandwagonesque” for the second-best Teenage Fanclub album slot. 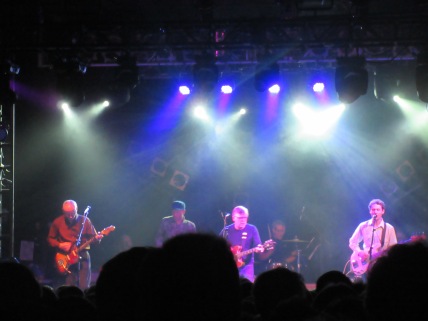 The format for the show at the Electric Ballroom was pretty straightforward. Two sets, with an interval. “Grand Prix” first, then “Songs from Northern Britain”. It was singer and bassist Gerard Love’s second last show – he’s leaving the band because of the international touring that the band are embarking on next year. The band aren’t flamboyant – they just get on with the songs. And the songs – so good! It was a brilliant show. The Byrds influence comes across strongly live, especially in the “Songs from Northern Britain” half. The highlights for me were obviously the songs I celebrated in my book. My top three these days have to be “Don’t Look Back”, “Neil Jung” and “Start Again”. As well as wonderful melodies (and some poignant lyrics) they all have great guitar moments. If I had one criticism of the show, it was that the solos weren’t mixed up high enough in the sound. So I was using my memory a bit to appreciate them. Maybe that was just me.

So, a great celebration of an unassuming band, but that one that has stayed really popular because their songs are just so good. On the way home, a little while after the gig had finished, a bloke about my age sat next to me on the Northern Line. He asked me if I had been to the concert – reasonable guess that any man of my age still in Camden might well have been there! I said yes and he said he just needed to talk about the gig, because it was so good. He was a massive fan – he had tickets for all three shows at the Electric Ballroom, and had been to the Glasgow concerts too – the band’s homecoming. That is dedication.

I’m not at that level, but Teenage Fanclub are a band I like a lot, and it was a privilege to be at the show last night. 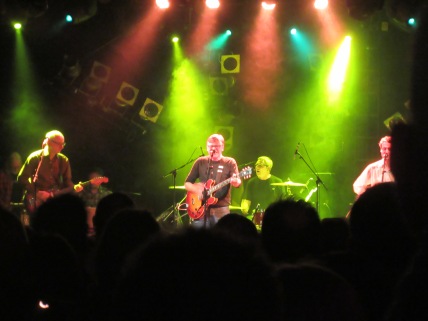 I'm blogging about the things I love: music, sport, culture, London, with some photos to illustrate aspects of our wonderful city. I’ve written a novel called “The Decision”, a futuristic political thriller, and first of a trilogy. I’m also the author of a book on music since the 1970s called “ I Was There - A Musical Journey” and a volume of poetry about youth, “Growin’ Up - Snapshots/ Fragments”. All available on Amazon and Kindle.
View all posts by John S →
This entry was posted in Music - concerts, lists, reflections and tagged concerts, Electric Ballroom Camden, music, Teenage Fanclub. Bookmark the permalink.