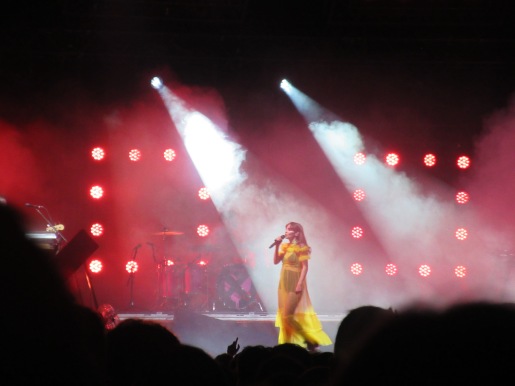 Chvrches played at Alexandra Palace last Thursday, the first leg of their UK tour, promoting last year’s album – their third – “Love is Dead”. “Ally Pally” is up in North London, perched on a hill which affords amazing views of London below, especially the City. The palace is a cavernous place, holding up to 10,000 people in the main hall. Chvrches are big enough to fill that these days. It’s good to see a band that you’ve followed pretty much since the start breaking into the big time, though the downside is that unless you are really dedicated (and probably quite young) you find yourself watching the big screens as much as the specks on the stage. The fate of the ageing concert-goer!

I first saw Chvrches at Latitude in 2013, in what was then called the i-Arena, in the Woods. The place was packed – there was a real buzz about the band. At the time I likened them to Human League and Erasure. They released their debut album “The Bones of What You Believe” in September that year, and I caught them at Shepherd’s Bush Empire in October. By then I’d grown to love the album, and it was great to see all my favourites, like “Lies”, “Tether”, “The Mother We Share” and “We Sink” being played. Those easy comparisons with 80s electropop were valid, but there was more to Chvrches, and that came with the voice, the look and the personality of Lauren Mayberry. She had a cold that night, but she battled through. After the gig, the album just sounded better and better, and I made it my album of 2013 in December.

It wasn’t until March 2016 that I saw Chvrches live again. In between, I think their focus was America, and the relentless touring most bands need to do to crack the market. Their second album, “Every Open Eye”, was released in September 2015. It was bolder, dancier than the first album. It took me a little longer to get into it, but it came in at No 4 in my 2015 top ten. My favourite tune was “Keep You On My Side”, which felt like a real dance floor banger. At the Albert Hall they were a revelation. Presentationally they had really stepped up a gear, and Lauren was moving around the stage a lot more. It was a show. The pounding beats of “Clearest Blue” from the new album ended the main concert with style, before a wonderful encore of “Afterglow” – Lauren’s voice at its most tender as the ceiling was lit with stars – and a celebratory “The Mother We Share”.

So that was good, but Latitude the same year was something else. They had second billing to the National on the main stage on Saturday night. It was a sultry evening, and I watched them about eight rows back from the stage – just on the edge of the moshers. And Chvrches absolutely bossed it. The bass lines coming out of the speakers were incredible. They thumped you in the chest at high intensity. It was exhilarating. Lauren was a ball of energy. This was the moment that confirmed for me that Chvrches were a truly great live band. Lauren reappeared during the National’s set, to sing a duet with Matt Berninger on “I Need My Girl.” The compliment was to be returned on the third album, “Love is Dead”, when Matt sang on the wistful “My Enemy”.

“Love is Dead” was released in May 2018. My first reaction was that it was more of the same as “Every Open Eye”, with added Taylor Swift in the production and some of the choruses. An obvious bid for the pop market. I liked it enough to make it No 9 in my 2018 top ten, but other things were getting more of my attention. Picking out some best songs for my 2018 Best Of complication got me listening again, and “Get Out”, “Miracle” and “Heaven/Hell” got my vote, along with “ My Enemy”. And before that, I’d got tickets for Ally Pally pretty much as soon as they were announced. After the triumphs in 2016, how could I not?

And so to Thursday’s show, with Jon G, also an admirer. In support were Let’s Eat Grandma – quite a step up for them. Their 2018 album “I’m All Ears” lacked the quirkiness of the debut, and was less interesting, on first listening. With more conventional dance beats the sound filled the hall well enough, but with both Jenny and Rosa mostly stuck behind their keyboards, the half of the show I saw wasn’t that amazing. They lost me a bit after their insouciant show at End of the Road in 2017; but there was a first tonight – they spoke to the audience! I need to give their new album a proper listen before this year’s End of the Road. I’m still interested to see how they develop in future, having first seen them play at Electrowerkz in Islington in 2016.

Chvrches came on in a blaze of lights and piled into “Get Out” from the new album and “Bury It” from the second. Lauren was resplendent in translucent yellow gown over her black top and shorts. Finished off with some heavy platform boots. Yes, the music is the thing; but Lauren’s outfits – and eye make up – are always interesting. Over the course of the evening, songs from “Love is Dead” dominated, but there was a substantial selection from the first album, including “Gun” and “We Sink” after the two openers. My two favourites, “Lies” and “Tether”, didn’t get a look-in, inevitably. Nor did “Keep You on My Side” – times move on. But “Every Open Eye” came into its own at the end of the main set, with rousing versions of “Leave a Trace” and “Clearest Blue”. Naturally “The Mother We Share” featured in the encore. There was no “Afterglow”, but “Really Gone” from “Love is Dead” was a lovely alternative during the set. That’s a song I hadn’t really fixed on before the concert, but I’ve been listening to it a lot since. As is often the case, I find myself giving new albums more airtime after than before the show. Possibly the wrong way round, but a good concert puts you in the mood for more.

So, yes, I really enjoyed the concert. It didn’t have the same impact as the Albert Hall or Latitude shows, but they were still at a time of development. Now it was consolidation. And there were one or two reservations. Being a long way from the stage was a choice, so can’t complain about that. But the sound wasn’t the crispest, and those bass lines only occasionally reverberated. In fact there was something a little bit rocky about it all, with a conventional drummer, and Martin Doherty playing guitar/bass quite a lot. He also did a bit too much singing and awkward dancing – it’s the moment to go and get another beer. Fair play – he writes a lot of the music, so deserves a bit of the limelight; and it gives Lauren a chance to have a rest. But there is the band’s image to think about.

What comes next for Chvrches I wonder, when the time comes to record again? They could do roughly the same for a while yet, especially when they are so good live. Or might they aim for the American rock arena? Then again,  maybe Lauren will be tempted by a solo album. A return to their indie-electro roots seems unlikely. I think there could be a crossroads approaching. Whatever, I hope we find out sooner than 2021!

Meanwhile, a few more photos, starting with a cropped version of the one at the beginning. 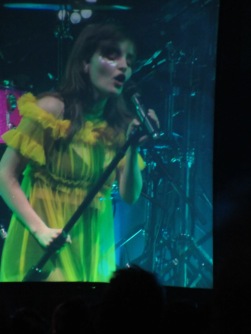 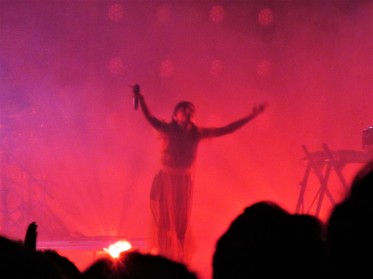 I'm blogging about the things I love: music, sport, culture, London, with some photos to illustrate aspects of our wonderful city. I’ve written a novel called “The Decision”, a futuristic political thriller, and first of a trilogy. I’m also the author of a book on music since the 1970s called “ I Was There - A Musical Journey” and a volume of poetry about youth, “Growin’ Up - Snapshots/ Fragments”. All available on Amazon and Kindle.
View all posts by John S →
This entry was posted in Music - concerts, lists, reflections and tagged Alexandra Palace, CHVRCHES, concerts, Let's Eat Grandma, music. Bookmark the permalink.