Thought I’d start a new series of photos snapped on my iPhone – still languishing on a version 3 at the moment. Daily scenes – never mind the quality, feel the place. With apologies in advance for likely bias towards West and central London, but I’ll try to branch out from time to time.

This is the Ealing Half Marathon, which finished in our local park, Lammas Park. I caught it after the elite had finished, but credit to everyone who took part. 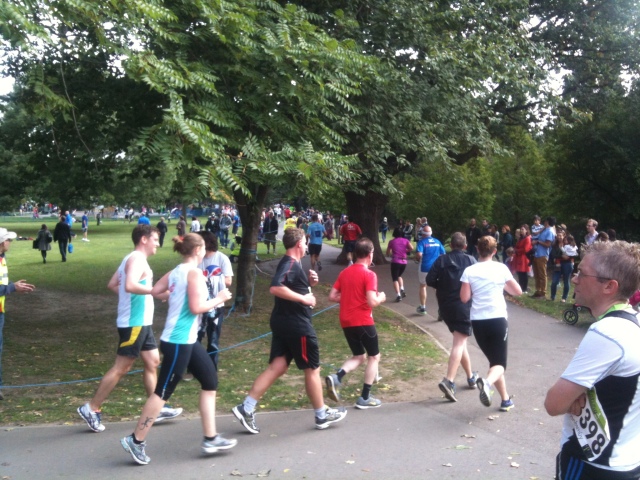 And then, a scene from my favourite bike ride: from Kew Bridge down to Putney Bridge along the Thames towpath – and then back home via Fulham, Hammersmith and Chiswick. At Putney there are loads of boathouses. In the background here you can see Fulham’s football ground, Craven Cottage, and in the distance, Wembley stadium, which is miles away. A bend in the river and no tall buildings allow a glimpse of the national stadium.

Shan’t commit to every day, but will try for as many days as possible.

I'm blogging about the things I love: music, sport, culture, London, with some photos to illustrate aspects of our wonderful city. I’ve written a novel called “The Decision”, a futuristic political thriller, and first of a trilogy. I’m also the author of a book on music since the 1970s called “ I Was There - A Musical Journey” and a volume of poetry about youth, “Growin’ Up - Snapshots/ Fragments”. All available on Amazon and Kindle.
View all posts by John S →
This entry was posted in Photos - lovelondonscenes and tagged Ealing Half Marathon, London, photos, Putney boathouses. Bookmark the permalink.