A Thames Journey: (1) From the Source to Cricklade

Sweete Themmes, runne softly, till I end my song.

One of the things I’ve missed most in this time of lockdown is being able to walk along the banks of the River Thames. I’ve whiled away many an hour of my retirement strolling along the river, mostly stretches between London Bridge to the east and Richmond to the west.  It’s good for the body and great for the soul. Fascinating, invigorating, soothing and inspiring in equal measure.

But if you can’t have the real thing, then the memories, the photos offer some sort of compensation. I have a lot of pictures, particularly of London, but also of the walks that my wife, Kath and I embarked on with our friends Jon and Maggie between August 2015 and April 2019, covering the length of the river from the source to Erith in Kent. With a bonus excursion to Canvey Island! I’ve been picking out the best of the shots for a photobook recently, at the same time as reading Peter Ackroyd’s magnificent book Thames, Sacred River. It got me thinking that it would be interesting to write about that journey, pausing along the way to reflect on other experiences that are related to the Thames in one way or another.  I hope it might be interesting to read too. 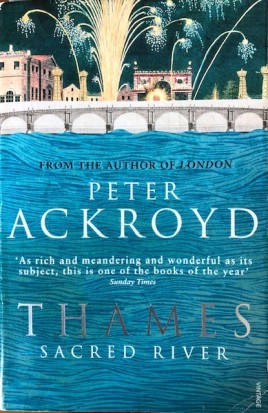 We didn’t do the walk in geographical sequence, upstream or downstream, but I thought I’d make this literary journey wind its way from the source to where the river opens out into the North Sea. From the bubbling stream of rural Gloucestershire to the oil refineries of Canvey Island.  From a trickle to a cascade, swelled by the waters of numerous tributaries, twisting and turning through country and town, ebbing and flowing with the tide as it reaches the capital.

The Thames in and above Oxford is often referred to as the Isis. Nowadays that word has an association with terrorism, but it is also the name of an Egyptian goddess. The Thames has been compared with the Nile for the fertility of its surrounds and its centrality in the country’s history and culture, and early Christianity did incorporate elements of Egyptian mythology. Some think that the story of Mary is in part derived from that of Isis, another mother figure. Who knows? The ancient names for the river seem mostly to have been variants of Thameisis. Peter Ackroyd suggests that the first half could derive from the Celtic word tam, which means smooth or wide-spreading.  Alternatively, it could be the Sanskrit tamasa, which means dark. The Thames has often been described as the dark river; and in its most polluted days it was positively black in London. And the isis bit might be a reference to the goddess, but it could also be a derivation of the Celtic word isa or esa which means running water. The Ouse and Exe rivers derive their names from the same source. So Thameisis could mean dark river or smooth running water. Throw in the goddess and it gets very complicated. Or maybe it’s simple: Thames just means river.

Just as unclear is where the Thames actually starts. There is a consensus these days it is at what is known as Thames Head, not far from the village of Kemble, which is near the ancient Fosse Way. But there are competing theories. One is that it emerges from the Seven Springs, just north of Cirencester. These feed the River Churn, which joins the Thames near Cricklade. So: is the Churn a tributary, or is it really the Thames? We will never really know.

Anyway, let’s assume the source is at Thames Head, in a field called Trewsbury Mead, near Kemble – the official version. That’s where we start this journey. It wasn’t where we started time-wise: that was in Erith – the other end. Let’s not worry about that. We found ourselves in Gloucestershire, in the middle of nowhere, on a beautiful, sunny, crisply cold day on 29 December 2016. We’d taken a taxi from Kemble station. As we walked across a ploughed field, the stalks of whatever crop had been there crunched under foot. The sun blazed, but it was freezing. It was a combination that made you feel truly alive. 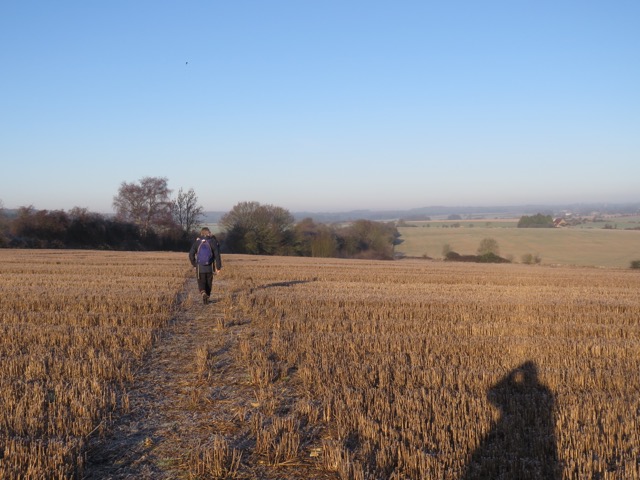 We made our way down the slope towards a scraggy wood. Just in front of the wood was a small mound with a headstone and a small hole, encircled by rocks. The source of the Thames! Is that it? No water to be seen. A signpost saying 184 miles to the Thames Barrier. I could see, further across the meadow, evidence of a stream. We wandered down there. It was the emergent Thames, steam seeming to rise from it. I guess the kinetic energy of the water passing over the rocks made it warmer than the freezing air above it, creating moisture. It was something you’d expect in a rain forest, not a field in Gloucestershire! 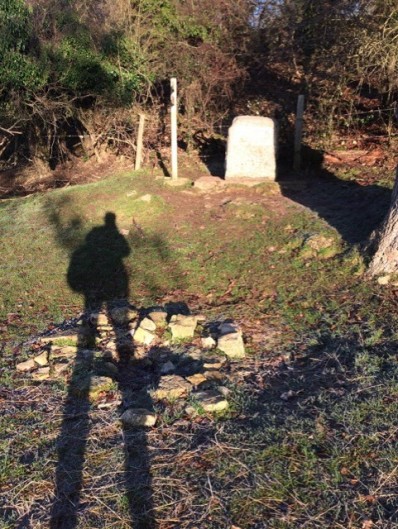 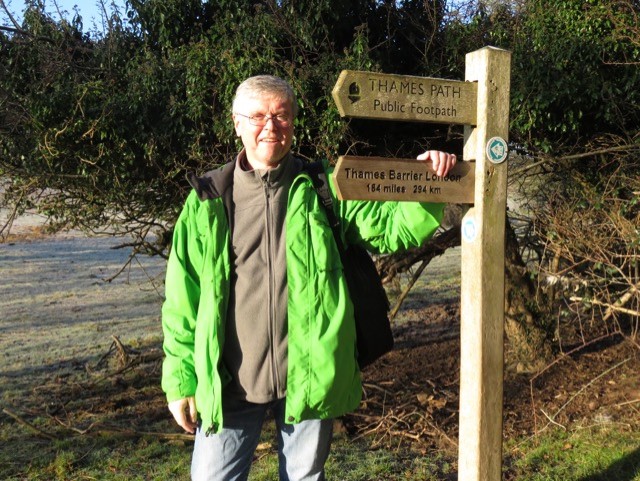 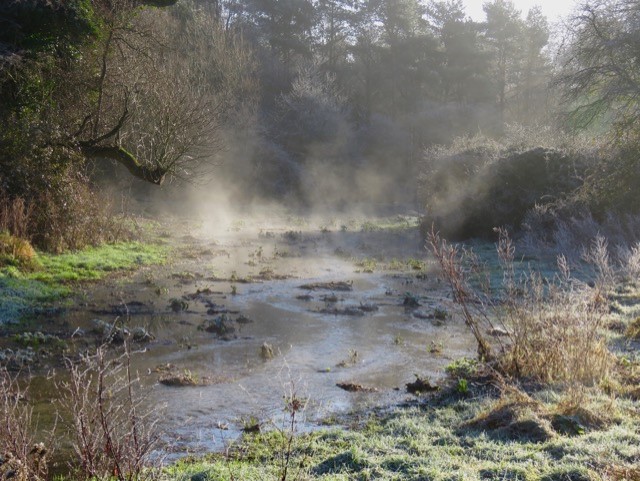 The path briefly took us away from the stream through some lovely countryside, tinged with sparkling frost in the bright sunshine. 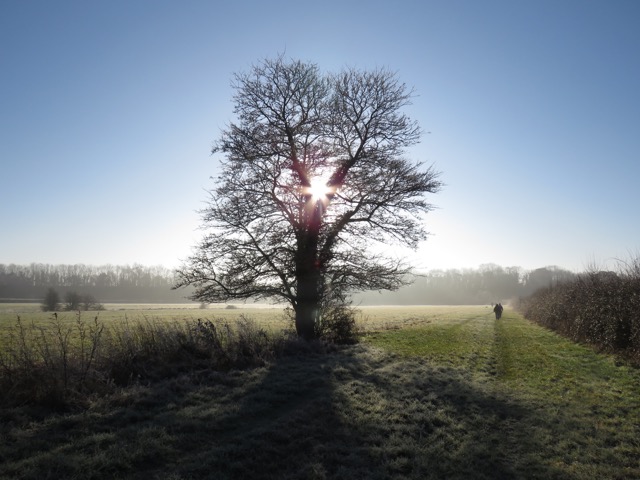 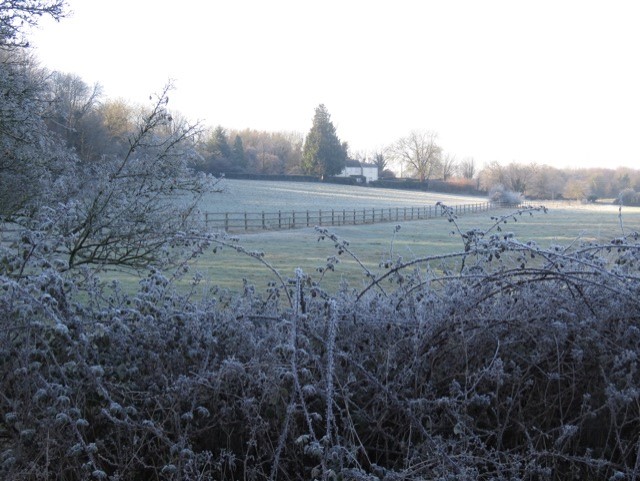 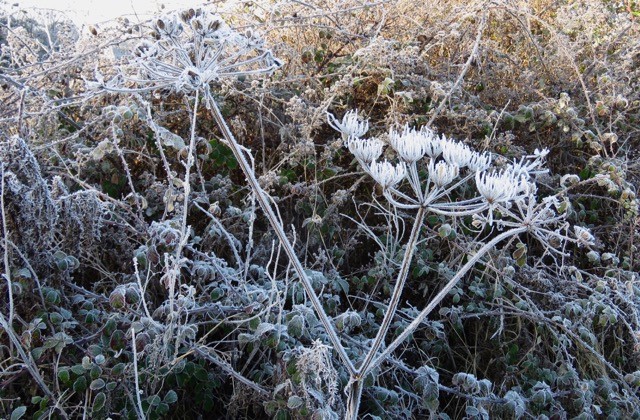 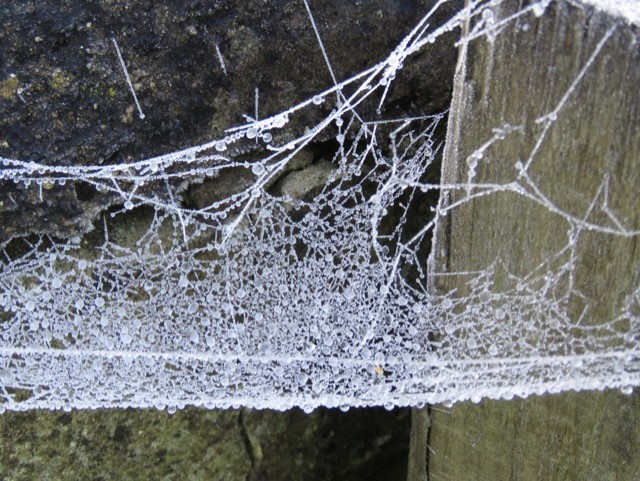 As we rejoined the river, it started to widen a little, bolstered by the input of other streams and rivulets.  It wound its way past Kemble and Ewen, both settlements dating from Celtic or Saxon times. Kemble means boundary; Ewen the source of a spring. The upper Thames was, in Saxon times, the dividing line between Wessex and Mercia. Whether the name Kemble denoted that, or simply the demarcation of local territory, I’m not sure. We didn’t divert to either – the daylight hours are precious at this time of year, and we needed to make it to Cricklade. On we walked, marvelling at how this unassuming river could be one and the same as the mighty beast that snakes through London.

Peter Ackroyd quotes from a poet called Thomas Love Peacock, who wrote a piece in 1810 called The Genius of the Thames. It’s apposite: 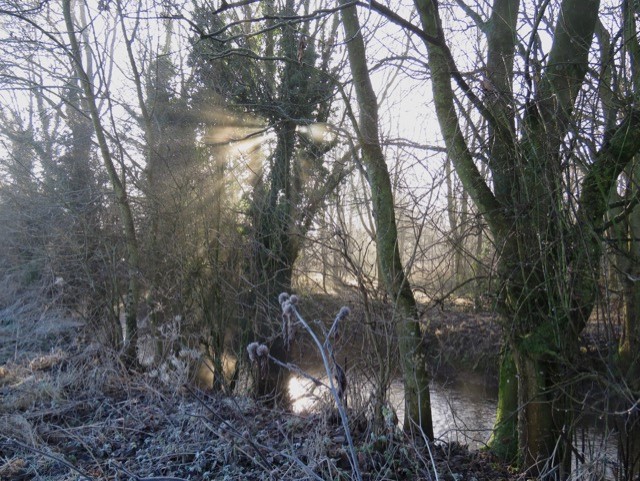 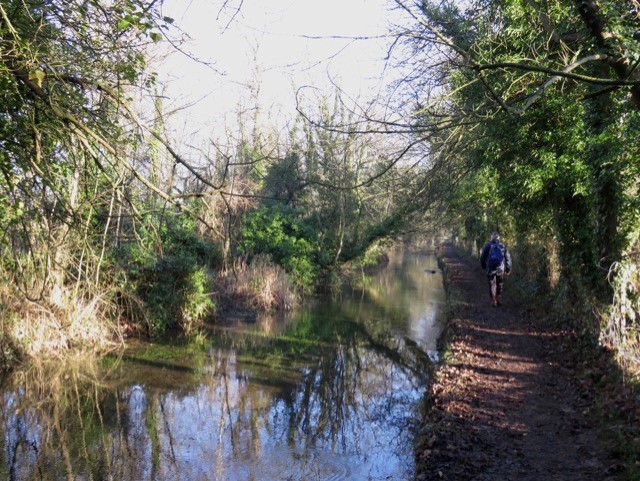 We passed through a pretty village called Ashton Keynes, where the Thames resembles a well looked after canal. There are three villages in the area with Keynes in their names. It comes from a French baron, Sir Ralph de Keynes, who owned much of the area in the times of King John. 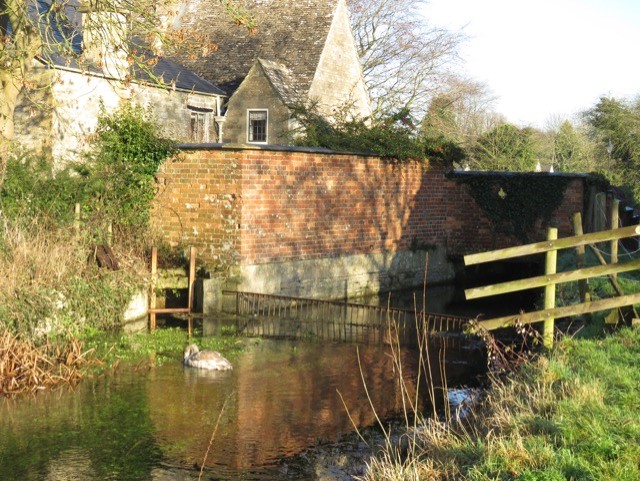 The banks became more manicured in the village centre

Soon after, as the sun began to descend, we found ourselves amid the gravel pits of the Cotswold Water Park, as the path briefly diverged from the river. There were some beautiful scenes as the trees glowed red in the sunset, reflecting on the water of the lakes. It was nature as art. 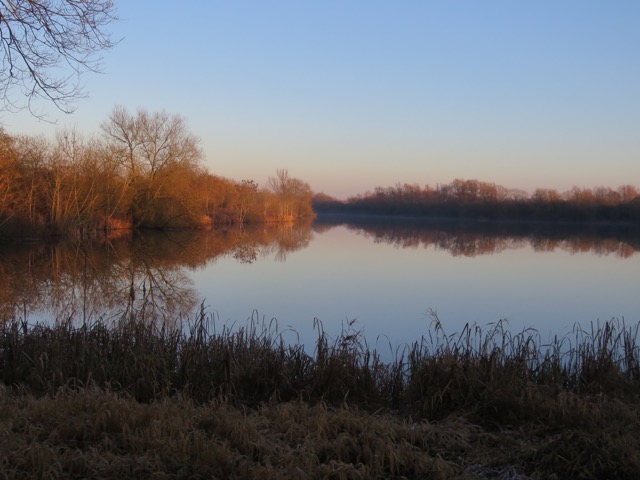 The mist began to fall now, adding to the beauty as we reconnected with the river. But it started to cause us concern, too, that we wouldn’t make it into Cricklade before darkness fell. None of us had brought a torch! Jon was reading his map with the light of his phone. The question was, where to come off the river and find our way into the town? Would fences or hedges bar our way? We ploughed on with fingers crossed and reached civilisation in the nick of time, through a farm if I recall. 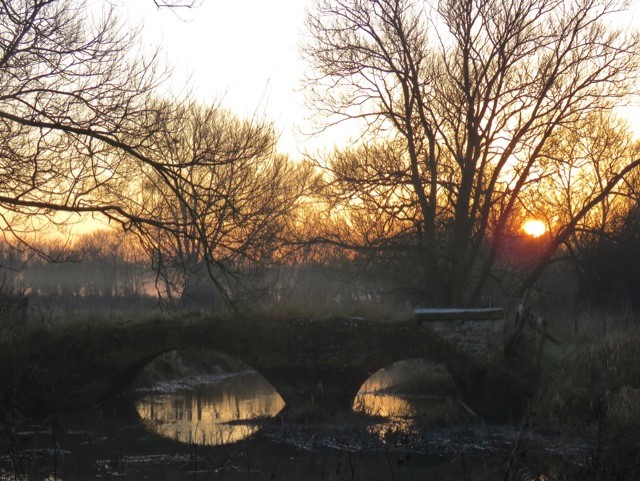 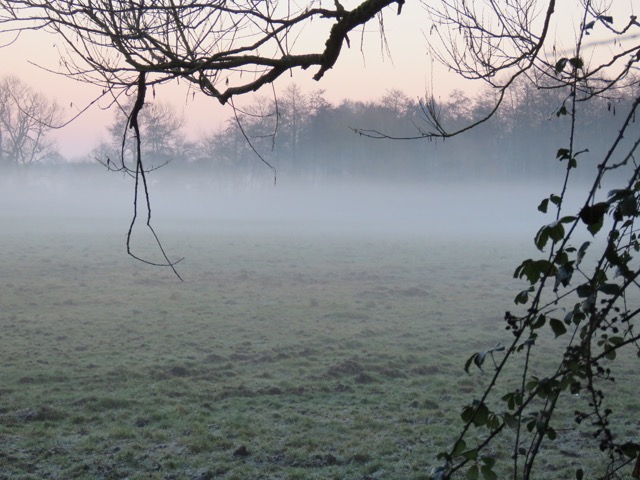 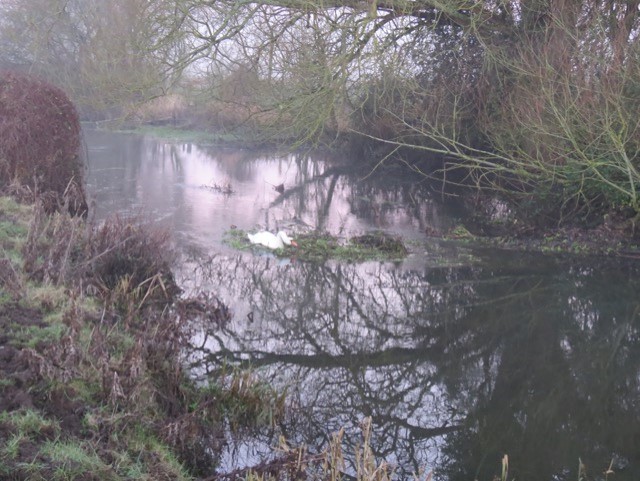 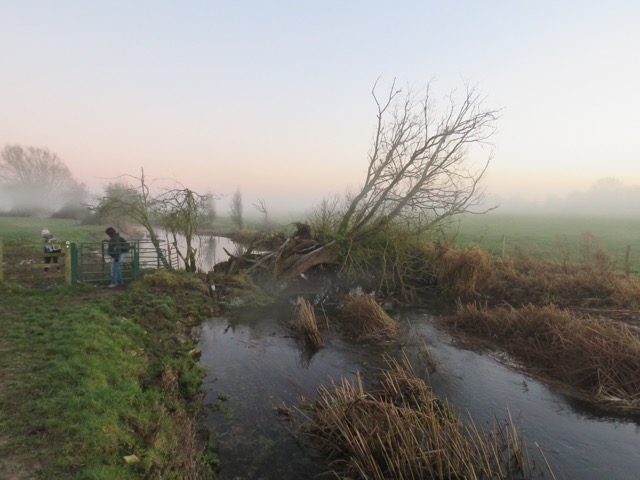 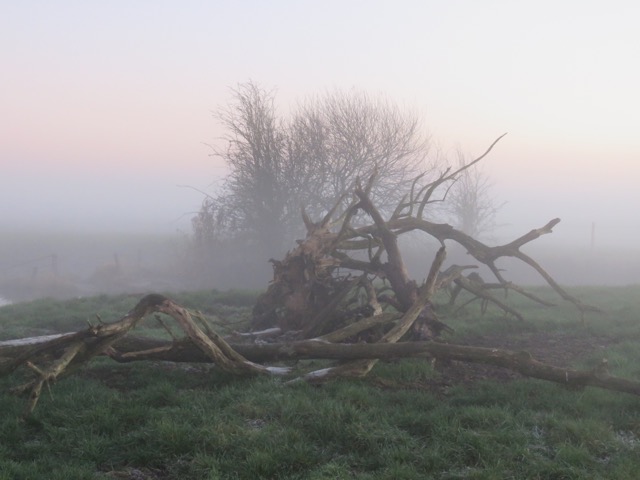 How glad we were to walk into Cricklade! It was time for a celebratory pint and to reflect on a stunning walk along the infant Thames.

I'm blogging about the things I love: music, sport, culture, London, with some photos to illustrate aspects of our wonderful city. I’ve written a novel called “The Decision”, a futuristic political thriller, and first of a trilogy. I’m also the author of a book on music since the 1970s called “ I Was There - A Musical Journey” and a volume of poetry about youth, “Growin’ Up - Snapshots/ Fragments”. All available on Amazon and Kindle.
View all posts by John S →
This entry was posted in A Thames Journey and tagged Cricklade, Photography, photos, Thames, Thames Head. Bookmark the permalink.

5 Responses to A Thames Journey: (1) From the Source to Cricklade